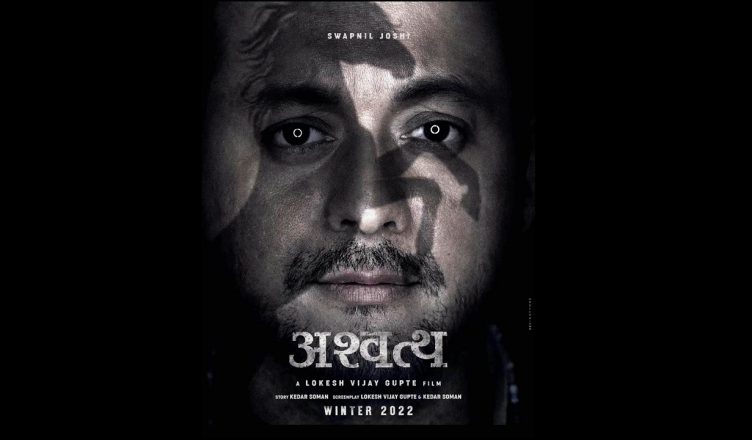 Marathi superstar Swwapnil Joshi has treated his fans on the New Year by sharing a glimpse of his new Marathi film, Ashwath, to be released later in the winter of 2022. The teaser and poster of the film directed by Lokesh Gupte were released on the eve of the New Year.

The Sanskrit shloka is followed by, in the backdrop of a horse running at full pace, with a Marathi verse that says, “Ashwath is the one who leads his life with self-esteem by tiding over the heart, wisdom, soul and ego.” The teaser denotes the rough idea about the script of the film leading to the rousing of the curiosity about the film. The curiosity has also gone northward after the Sanskrit shloka in the teaser is heard in the voice of Makarand Deshpande. The film lovers are curious to know whether the leading theatre personality is part of the film’s cast.

Swwapnil Joshi, while sharing the teaser of the film with his fans and followers on social media, said, “New year, new resolution…Nandi Ashwatthachi !!! (The foreboding of Ashwath!).”

The film is directed by noted director Lokesh Gupte. With his popular films like AB Aani CD, Ek Sangaychay, Runanubandh, Datebhet and Mungala, Lokesh has carved a niche as a director in the film industry. He is all ready to set a milestone with yet another out-of-the-box film in the form of Ashwath. The film will be released in the winter of 2022.

The teaser and the poster of the Ashwath has already created a buzz in the industry. The audience is eager to watch Swwapnil Joshi in his new role in the forthcoming film; however, the information about the film, its cast and crew members has been deliberately kept under wraps. Nevertheless, the coming together of Swwapnil and Lokesh is going to be a real treat to the Marathi audience.

Swwapnil is known for the experiments and new challenges he adapts as an actor. His roles in TV serials, Marathi and Hindi films and web series has made him a household name. Right from Ramayana, Krishna to Had Kar Di, Dil Vil Pyaar and Tu Tu Main Main, Swwapnil has exhibited his all-round talent in various serials. His versatile and lead roles in films like Duniyadari, Mogra Phulala, Mumbai-Pune-Mumbai, etc won applause for him as an actor. His lead appearance in two seasons of the web series Samantar was widely appreciated by the audience.