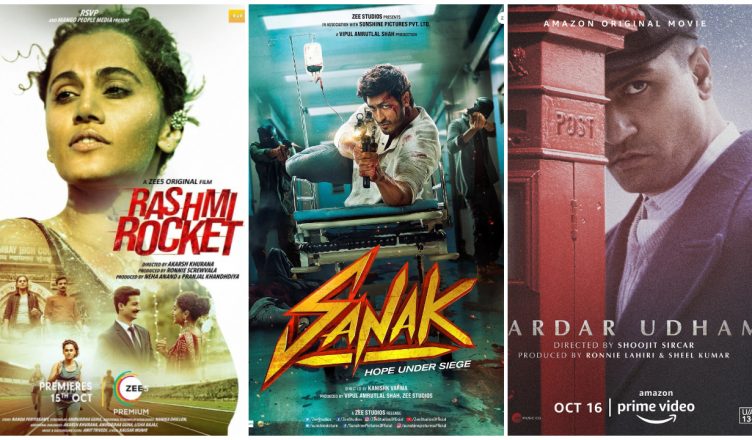 3 DIGITAL FILMS TO CLASH ON THE DUSSEHRA WEEKEND

Dussehra has become an important festival for filmmakers as it has been observed that audiences throng cinemas in hordes during this time. Sadly, with cinemas shut in Maharashtra till October 22, this Dussehra, we’ll see a clash of three significant films on this festival on digital. My analysis on these three films:

1. RASHMI ROCKET: It stars Taapsee Pannu, Priyanshu Painyuli and Abhishek Banerjee and is the story of a celebrated athlete whose life turns upside down after facing humiliating allegations. It is directed by Akarsh Khurana, who last directed Karwaan. The trailer of this film is quite arresting. It starts off with an indication that it’ll be just another sports film. But then it takes a shocking turn as Taapsee’s character is accused of being a man! If made well, it has a high chance of getting a high viewership. It releases tomorrow (October 15) on Zee5.

2. SANAK: It stars Vidyut Jammwal, Rukmini Maitra, Neha Dhupia and Chandan Roy Sanyal. Like most films of Vidyut, this film is also produced by Vipul Shah. It is a tale of a man whose wife has just undergone a life-threatening operation when the hospital is taken over by a ruthless villain and his men. The trailer is very entertaining. Vidyut’s stunts seem better and more fun this time. This is a film that would have made for a great watch in cinemas as it looks like a mass entertainer. Shockingly, it releases tomorrow (October 15) on Disney+ Hotstar but the buzz about the film is very low. Many are not aware of the film and that it’s releasing the next day.

3. SARDAR UDHAM: It is based on the life of freedom fighter Sardar Udham Singh and is directed by Shoojit Sircar. Vicky Kaushal plays the lead. Sardar Udham Singh played an important part in our freedom struggle but not much is known about him. Hence, the film is at an advantage. Also, it looks like a rich product matching international standards. On the flipside, it also looks quite niche. It doesn’t follow the conventional and massy format of filmmaking that audiences are used to. It remains to be seen if it manages to get widespread viewership. It’ll release on Amazon Prime which has left no stone unturned in promoting the film. Surprisingly, it’ll arrive digitally a day after Dussehra, on October 16.