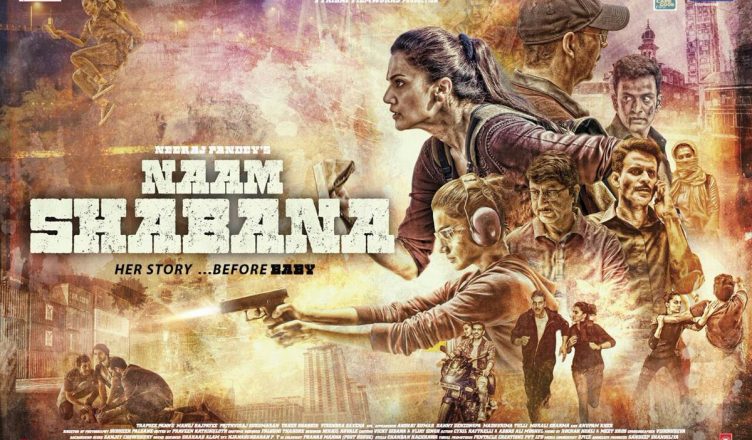 A few but significant number of actresses have donned the action avatar in Bollywood in recent times. But Taapsee Pannu’s stint in Baby is the most memorable. It was no surprise hence when the makers decided to come up with a prequel of Baby but with Taapsee’s character as the central protagonist. Titled Naam Shabana, the film is a decent fare but slips when it tries to get into the territory of its predecessor, Baby.

The story of the movie: Shabana Khan (Taapsee Pannu) has had a tragic past and even her present life goes topsy turvy after a shocking incident. But her life changes for the better when she gets contacted by Ranvir Singh (Manoj Bajpayee) who offers her to work as an undercover field agent for the cause of the country.

Naam Shabana has an okayish beginning with a spy movie-kind of a feeling. But it is better than the opening sequence of Force 2, which is also in the same league. The story soon shifts focus on Shabana and from here till the intermission point, the film is a brilliant, emotionally-driven ride. The light romantic moments are just right and Shabana’s struggles and her reason for going all out is terrific. The interval point is fabulous but from here, the film starts slipping a bit. It goes into Baby mode. Baby’s climax went into the zone of impossible but came out with flying colours as it was highly convincing. Naam Shabana’s climax tries to do something similar but it’s not entirely convincing. Thankfully, there are some nice, dramatic moments that keep the interest going.

Naam Shabana rests on Taapsee Pannu’s firm, strong shoulders. It also goes well with the theme of her earlier film, the very hard-hitting Pink. Whether it’s emotional, action-packed, dramatic, romantic or tragic sequence, Taapsee is first-rate and doesn’t give any reason to complain. Surely her best work and hope to see her in many more significant roles! Manoj Bajpayee also does a very good job. The way he commands attention and awe through his mere voice is praiseworthy. He’s not kicking butt but neatly gives back-end support. A great character, played well, and hoping to see him collaborate with Akshay in Baby’s sequel! Akshay Kumar (Ajay Singh Rajput) has 15-20 minute role and as always, gives a terrific performance. His entry is whistle-worthy! Prithviraj Sukumaran (Tony) is quite nice in a negative role. But the surprise factor that is associated with his character doesn’t work. Taher Shabbir (Jay) delivers a stupendous performance. His screen time is limited but he’ll surely be remembered by viewers long after they have exited the theatre. Anupam Kher (Shukla) is lovely and once again, his character raises laughs. The actor playing Karan and Shabana’s mother are decent. Elli Avram (Sona) has a cameo and looks super-hot. Danny Denzongpa (Feroz Ali Khan) is fine. Murli Sharma (Gupta ji) and Madhurima Tuli (Anjali) are just there for a scene. Virendra Saxena is good while the actor playing Mikhail induces fear and how. Zakir Hussain and his 2 colleagues engage audience very well in their 10 minute scene

Songs aren’t needed and most of them are relegated to the background. Rozaana is melodious while Zinda has an exhilarating feel. Zubi Zubi is very well shot and placed while Baby Besharam is needlessly incorporated. Sanjay Chowdhury’s background score is exhilarating and the Baby theme is used as well which works big time. Cyril Raffafeli and Abbas Ali Moghul’s action is very exciting and real. Sudheer Palsane’s cinematography is raw but at the same time, neat. Neeraj Pandey’s story is damn good. The amount of research he has done and put into the film is superb. Dialogues are simple and witty. Screenplay is outstanding in the first half but doesn’t have novelty value in the second half. Shivam Nair’s direction is quite nice and he manages to make it look like a prequel to Baby. He’s always been a good filmmaker and here’s hoping he gets to do better and bigger projects from now on!

Some of the best scenes:
1. Shabana’s entry
2. Shabana celebrates Jai’s birthday
3. Shabana-Jai returning home at night
4. Shabana clears the first test of Ranvir (damn good)
5. Shabana in Goa (excellent!)
6. Tony followed in Malaysia and the scene thereafter
7. The sequence involving Shabana, Sona, Ajay (the musical touch in this sequence is superb!)
8. The climax

On the whole, Naam Shabana has a terrific first half but loses novelty value post-interval. Thankfully, it’s has some nice, interesting moments to keep the audiences engaged. Taapsee Pannu delivers one of the most powerful performances in recent times. Manoj Bajpayee, Akshay Kumar and Anupam Kher are good but special mention should also go to Taher Shabbir – this actor leaves a huge mark in a 20-25 minute appearance. Despite the minuses, it’s a definitely a one-time watch and much better than the other recent spy films like Force 2 and Commando 2!