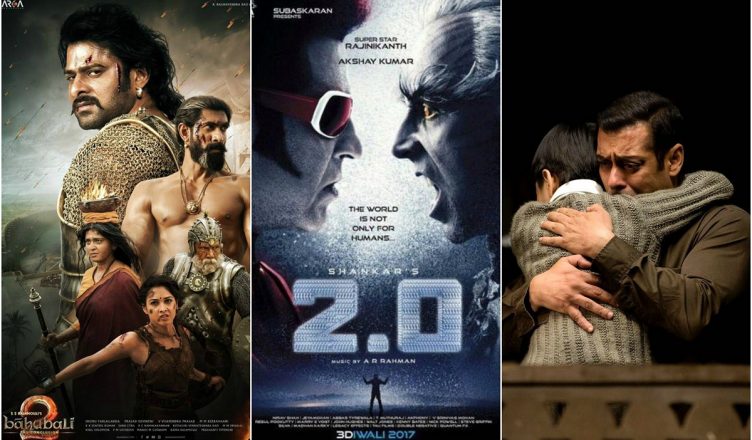 The trailer of Baahubali 2 is out and as expected, it has increased the curiosity about the film further. The hype anyways was there since part 1, released in 2015, was a smash hit. Even the Hindi version of this Telugu film did very well which was a rarity.

The other Southern sequel that would release this year is 2.0 and it’s expected to hit screens in Diwali 2017. The first part, Robot, was highly successful down South while the Hindi version was a decent success. 2.0 is expected to do much better as it stars Rajinikanth along with Akshay Kumar, the latter will be seen as the crow-like villain. Director Shankar’s films are always visually splendid and mass-oriented and hence, 2.0 can create lot of frenzy throughout the country.

It’s difficult to say which one would be a bigger hit out of the 2 (although Baahubali 2 seems to have a slightly better chance). But the bigger question is: Will a non-Hindi emerge as the biggest grosser of 2017? This happened in 2015 too when Baahubali collected 361 crore across all versions (some reports suggest that it did 385 crore). And Baahubali 2 surely can do more, especially since the Hindi markets will also do even better. The Hindi version of Baahubali did around 110 crore and Baahubali 2 has high chances of crossing the 175 crore mark. The total of Baahubali 2 hence can be 400 crore plus! 2.0 on the other hand too can set the box office on fire. It’s difficult to say how much it will earn eventually but it should easily go over Rs 300 crore keeping in the mind the grandeur of the film and craze among audiences for it.

The Hindi releases meanwhile might not be as successful. The only film that might give a tough competition to these Southern releases is the Salman Khan starrer Tubelight that releases during Eid. Salman is a superstar to reckon with and Tubelight seems to be a universal family entertainer on the lines of Bajrangi Bhaijaan, another loved film of 2015. Bajrangi Bhaijaan had crossed the 300 crore mark and Tubelight is expected to do even better. But whether it can cross the 400 crore mark like Baahubali 2 is doubtful though.

The other biggies of the year – Shah Rukh Khan-Anushka Sharma’s untitled next, Golmaal Again, Tiger Zinda Hai and Padmavati – will do well but it’s next to impossible for these films to emerge as the biggest grossers of the year.

The impact of Hollywood and regional films is increasing with every passing year. Few years ago, it was impossible that a non-Hindi film will do so well at the box office across the country. But times have changed and it’s high time that Bollywood filmmakers wake up and smell the coffee!