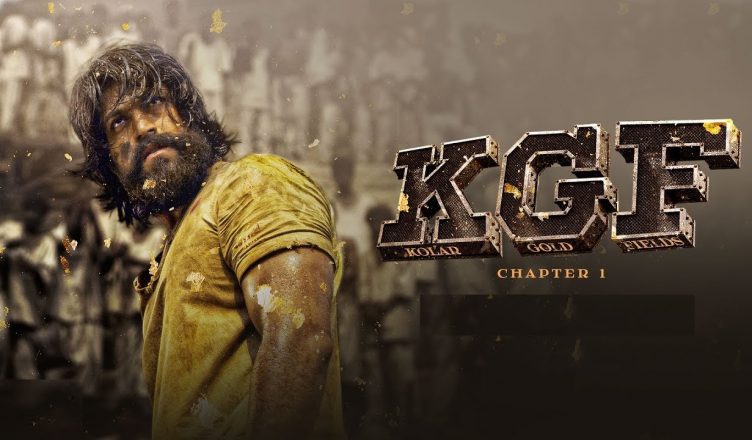 For a long time, there has been a North–South divide when it comes to films. The success of both parts of Baahubali and also 2.0 in recent times has tried to bridge the gap. Following the footsteps of these marvellous films, now writer-director Prashanth Neel presents KGF: Chapter 1, a Kannada film starring one of the top actors of that cinema, Yash. The film was largely unknown earlier but has built considerable buzz with its trailer and marketing by Excel Entertainment, which is presenting the dubbed Hindi version. Thankfully, the film makes for a nice watch although it has quite a few rough edges.

The story of the movie (with a few spoilers…read at your own discretion): Rocky (Yash) is born in 1951 in Baria, Karnataka to a poor mother. His father’s whereabouts are unknown and his mother passes away when he’s 10. Before her demise, she advises him to become a rich man and to get out of poverty. He shifts to Bombay (present day Mumbai) since this is where he realizes that he can strike gold. And he does literally as he gets sucked into the business of smuggling gold biscuits, run by a don named Shetty (Dinesh Mangaluru). Rocky grows up and becomes Shetty’s trusted and also the most ferocious. Shetty gets insecure and then his senior Andrews arrives from Bangalore (present day Bengaluru), Karnataka. He tells Rocky to work with him for a mission that can make him stinking rich. Rocky reaches Bangalore and falls for Reena (Srinidhi Shetty), a girl with temper and attitude. Meanwhile, Rocky is given the mission of eliminating Garuda (Ramachandra Raju), the son of Suryavardhan. Suryavardhan is the one who discovered gold at Kolar, Karnataka and bought the land there. He named it Narachi Limestone Corporation and gave the task of running this multi-crore business to his 5 trusted men. One of them is Rajendra Desai, with whom Andrews works and whose daughter is none other than Reena. Suryavardhan is ill and on his deathbed. He’s worried since all these 5 men and also Garuda are waiting to usurp the throne. Garuda comes to Bangalore for a political event but sadly, Rocky is not able to finish the job. He then decides to go to the Kolar Gold Fields (KGF) to complete his mission. His associates warn him that going there can be fatal as it’s riddled with more than 300-400 men guarding the place and getting the work done from 20,000 slaves who are made to work for 10-12 hours and kept in inhuman conditions. Rocky however doesn’t pay heed and goes ahead.

KGF: Chapter 1 zooms like a rocket from the word ‘Go’. No time is wasted and the film takes off from an interesting point. Rocky’s childhood portion is very entertaining. His adult entry is rocking and quite massy. There have been several films that have followed a similar template and director Prashanth Neel has tried his best to make sure that KGF: Chapter 1 stands out. Things get better once Yash reaches Bangalore and meets Reena. Post-intermission, the action shifts to the gold fields and the world out there is shown brutally. It’s sure to send chills down the spine of many viewers! This is also when one realizes that the film is too complicated as there are too many characters and too much happening.

Also, one has to keep in mind that just as the title suggests, this is the first part of the KGF franchise. So there will be a sequel as well and at few points, one gets a glimpse of it too. But the finale is sans any cliff-hanger, the way it was in Baahubali. It’s ending shook viewers tremendously and ‘Katappa ne Baahubali ko kyon maara’ was a question that intrigued viewers for close to 2 years. KGF: Chapter 1 ideally should have ended at a similar point but alas that’s not the case.

Yash gives a fabulous performance and takes the film to great heights. He looks totally convincing for the part – the not-to-be-messed-with types. At the same time, he has a heart of gold and those scenes are also great. After Prabhas, he’s the next Baahubali down South and here’s hoping he does many more such pan-India films. He surely has the potential to become big in the whole of India! Srinidhi Shetty is glamorous and although she has a limited role, she proves she has a spark. Malavika Avinash (Deepa Hegde) leaves a huge mark in a small role and same goes for Anant Nag (Anand Nigalgi). Vasishta N Simha (Kamal), Ramachandra Raju and Dinesh Mangaluru are decent. The actors playing Andrews, Suryavardhan, Vanram, the blind slave and Rocky’s mother are also good. The actor playing the peon hams. Mouni Roy is hot in the item song.

Ravi Basrur‘s music is okay and doesn’t contribute much to the film. ‘Salaam Rocky Bhai’ is quite fun and whistle worthy. ‘Gali Gali’ is sizzling. Ravi Basrur‘s background score however is exhilarating. Bhuvan Gowda‘s cinematography is breathtaking and gives the film a big screen appeal. Shivakumar‘s production design is quite real and rugged and works big time. Anbu Arivu and Vikram Mor‘s action is one of the film’s highlights. It is however gory at few places. Yogi G Raj and Sania Sardhariya‘s costumes are glamorous and grungy, as per the requirement of the scene. Srikanth’s editing is quite stylish which gives the film a nice touch. But also, a few scenes are too quick.

Prashanth Neel‘s story is promising and imaginative. The world that he has created is quite impressive and the way the film seamlessly moves from Bombay to Bangalore to KGF is great. Credit for it also goes to his riveting screenplay. But the film gets a bit messy and even long. Prashanth Neel‘s direction is stylish and entertaining and he keeps the viewers glued for most parts. He also makes the world of the gold mines very crude I guess to make the desired impact. Also, thanks to his direction, the film has more of a pan-India appeal and hence has a chance in Hindi belts too. Finally, the dialogues in Hindi are a bit over the top but for such kind of a film, it works big time.

On the whole, KGF: Chapter 1 is an entertaining and a cinematic tale and deserves a big-screen watch. It is quite complicated, violent and has too many characters which makes the whole setup a bit confusing. Also, it doesn’t end in a way that will make you wait for Chapter 2, a la Baahubali or Gangs Of Wasseypur. Yet, it’s surely a one-time watch for its grandeur, direction, mass appeal and Yash. Go for it if Zero doesn’t interest you!