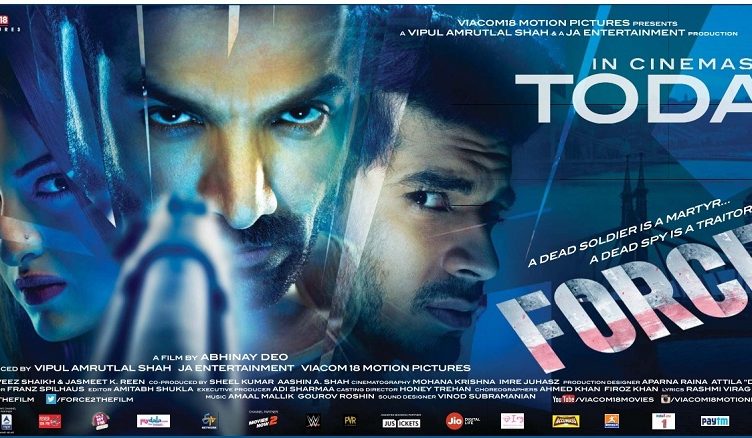 Our spies are working all across the globe, collecting information about our enemies for the safeguard of our nation. Many of them work for years and years and they never are able to tell anyone about their profession, not even their close family members. The worst thing that happens is when they get caught. Instantly, the government washes their hands off them. Force 2 hence has the tagline: A dead soldier is a martyr, a dead spy is a traitor! Of course, the film is much more than this and yes, it has loads of exciting action sequences. However, the film fails to make the desired impact in the second half, just like the first part. And unfortunately, just like part 1, Force 2 too is an average fare!

The story of the movie: A RAW agent is killed in China and ACP Yashvardhan (John Abraham) gets involved in its murder case. He finds out that there’s someone in the Indian Embassy in Budapest who is responsible for leaking out information to the Chinese about our spies. Yashvardhan is sent to Budapest to find the mole and accompanying him is Kamaljit Kaur aka KK (Sonakshi Sinha). What seemed simple initially turns out to be a much more complex case for Yashvardhan and KK. The mole – Shiv Sharma (Tahir Raj Bhasin) – turns out to be much smarter and knows every trick to outwit the duo

Force 2 begins with a bang. In fact, the first half is highly exciting. The way the RAW agent gets killed in the most brutal away is shocking but at the same time, quite novel, especially the way it’s presented. Yashvardhan’s entry is heroic and it takes the film many notches higher. KK’s entry in the narrative adds to the fun and drama. The bomb blast in Budapest is another exciting sequence that takes the audiences by surprise. The way Shiv tries to confuse and provoke Yashvardhan and KK amidst all the action happening around make for a great watch. The intermission point comes as a shocker!

However, Force 2 goes downhill from here on. Logic goes out of the window too many times because of which the film fails to be as convincing as it was before. This happens immediately after the intermission. Certain questions are left unanswered. Also, the entire agenda behind the killings of RAW agents and how it all culminates is a bit questionable and debatable. The climax fight is fun but not even half as exciting as the previous fights in the film.

Talking of performances, John Abraham as always excels. He is made for such roles. From the entry sequence itself, he rocks the show and that goes on right till the end. He’s a pro in action scenes and that’s a given by now. But the way he underplays in the few emotional sequences is also praiseworthy! Sonakshi Sinha gives a yet another fine performance, after Akira, which also saw her in an action avatar. She keeps everything controlled and looks convincing in the action sequences. And the best part is that she has a VERY substantial role in the film! Tahir Raj Bhasin does remind one of his act in Mardaani but the character is different and so are the happenings in this film. Yes, in a way, the film doesn’t let him to try something new but he does fine and that’s what matters. Narendra Jha (RAW chief Anjan) is quite nice and is completely in character. Freddy Daruwala (Harish) makes a mark in a cameo. Adil Hussain (Brijesh Sharma) is quite decent. The actress playing Martinez is quite sizzling. Genelia Deshmukh (Maya) brings smile with her special appearance. Boman Irani (Karan Pratap Singh) is alright.

There are no songs in the film, except Kaante Nahin Katate’s remix which looks out of place, especially since it’s a Hindi song and is set in a shady pub in Budapest. And no, the Sonakshi Sinha version is not present in the film. Prasad Sashte’s background score is quite exciting, especially the mouth organ piece. Franz Spilhaus and Allan Amin’s action is the highpoint of the film. The car-lifting sequence of John is killer and the other scenes are also quite nice. Imre Juhasz and Mohana Krishna‘s cinematography is eye-catching and exhilarating. In the climax fight, John’s face is not shown and instead, it’s shown from his Point-of-view that makes for a nice impact, although it was probably done as John was injured. Parveez Shaikh and Jasmeet K Reen‘s story has promise without doubt. The dialogues are simple and sharp. The screenplay is good but could have been better in the second half and climax. Same goes for Abhinay Deo’s direction. He deserves praise for keeping things simple and to the point. But he should have also kept logic in check. From the first scene of the second half, the logic goes out of the window and how. And that is just the beginning as some of the subsequent scenes also fail to seem convincing. The message given in the end is good but the way its done might instigate debates.

On the whole, Force 2 boasts of a top-class first half that will keep viewers on the edge of their seats. But the film goes downhill as soon as the second half begins and it continues right till the end. Also, showing Kaante Nahin Katate’s remix being played in a shady Budapest pub is just too much, especially when the film has tried it’s best to not show that every third person in a foreign city speaks Hindi, as it often happens in our films. However, the message of the film is quite good. John Abraham as always rocks the show while Sonakshi Sinha also does a great job. Tahir Raj Bhasin is still in Mardaani mode but does well. At the box office, the film might do slightly well thanks to no other good film in sight. But in the long run, it won’t be a huge commercial success, just like its predecessor!