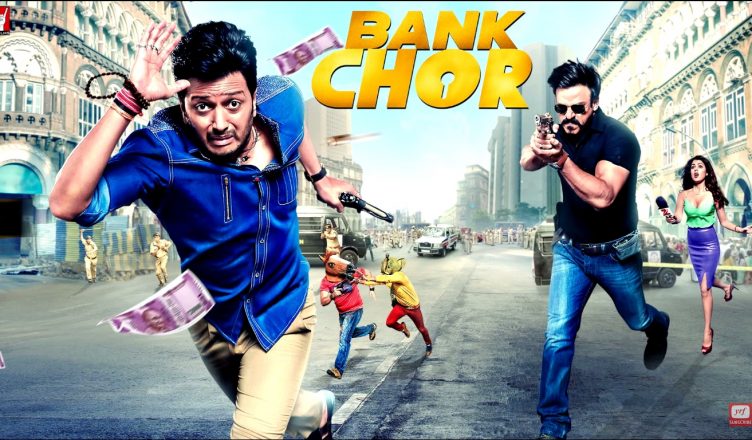 Mindless comedies at one point were in vogue in Bollywood but as the tastes of the moviegoers started getting evolved, the frequency of such films started decreasing. Bank Chor hence stands out from the flood of releases every week as from the trailers, it promises some great, goofy entertainment. However, Bank Chor is much more than laughs. It has some unexpected twists and turns along with occasional (clean) humour!

The story of the movie: Champak (Riteish Deshmukh), Gulab (Bhuvan Arora) and Genda (Vikram Thapa) arrive at a posh bank in Mumbai as thieves and in disguise. Their plan is to rob all the money stored in the bank. Unfortunately, everything goes wrong. Moreover, the cops get information about the bank-robbery-in-progress in no time. To make matters worse, not just the police officers but tough CBI officer Amjad Khan (Vivek Oberoi) also arrives at the crime scene.

Those who have seen the trailers would know what’s going to happen in the film at least for the first 30-40 minutes. The robbery commences, the characters are quickly introduced and as expected, a lot of madness erupts. The laughs however are not much, except at few places. But it’s engaging and entertaining and hence no complaints. It’s only during the intermission point that viewers are given a jolt and from here, the film goes into another zone. What seemed like a comic bank heist drama turns out to be much more than that. Again, the cinematic liberties are aplenty. Also, the whole thing is complicated and it takes a while to get a hang of things. But that in a way also works since viewers are constantly trying to guess what exactly is going on, thereby keeping them firmly gripped. Also, the twists and turns continue right till the end which is also praiseworthy.

Bank Chor boasts of some fine performances. Riteish Deshmukh raises laughs in the initial first hour but later, shows varied emotions and he does it very nicely. A lot would have expected that since he has done so many comic capers, Riteish would have sleepwalked into this role. But that’s not the case for sure and he’s bound to surprise you! Vivek Oberoi looks super-dashing and also delivers a first-rate performance. Bank Chor shows yet again why Vivek deserves to be seen more! Bhuvan Arora, who played the evil murderer of Taapsee Pannu’s boyfriend in Naam Shabana, is seen in a diametrically different avatar here and does fairly well. Vikram Thapa gets less scope but is very good nevertheless. Rhea Chakraborty (Gayatri Ganguly) is not just a pretty face in the film. She has an important role to play and as expected, delivers an able performance. Sahil Vaid, last seen as Varun Dhawan’s sidekick in Badrinath Ki Dulhania, is the biggest surprise of the film! He has a crucial role to play and he’s bound to shock you with his performance! Watch out! Upendra Limaye (Home Minister) is good and as usual. Baba Sehgal plays himself and doesn’t have much to do. He deserved much better role in the film.

There are no songs in the film which is a good idea since there isn’t scope for any track. Only the instrumental “Mela: The Bank Chor Theme” (by Shrikanth Sriram) makes it to the film and goes well with the narrative. Overall, the background score (also by Sriram along with Superbia) is exhilarating. Adil Afsar’s cinematography is simple while Aparna Raina’s sets are authentic and grand. Baljeet Singh Marwah & Bumpy’s story is smart although it gives a déjà vu of similar films in the past. Ishita Moitra Udhwani’s dialogues contribute to the laughter. It’s praiseworthy that the one-liners are devoid of below-the-belt jokes. Baljeet Singh Marwah, Bumpy, Omkar Sane and Ishita Moitra Udhwani’s screenplay is engaging but confusing at a lot of places. Also, they could have avoided so many cinematic liberties. Bumpy’s direction also could have been simplified although he has directed few scenes really well.

On the whole, Bank Chor is much more than being just a comic bank heist drama. The numerous twists and turns keep the viewers engrossed. Performances are damn good. What takes the film down are the numerous cinematic liberties and a complicated narrative. Nevertheless, these bank chors and their adventures deserve a watch, at least once!