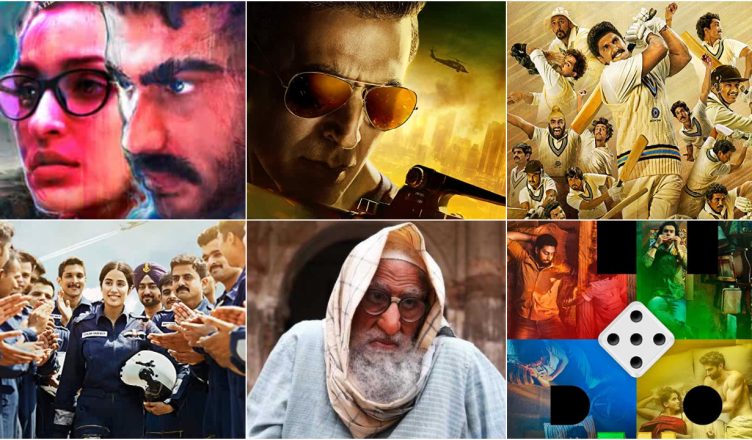 THESE ARE THE BOLLYWOOD FILMS AFFECTED BY CORONAVIRUS OUTBREAK – PART 1

If all was well, Sooryavanshi, starring Akshay Kumar, and directed by Rohit Shetty, would have released by now and would have been breaking records. Sadly, the Coronavirus outbreak occurred, prompting a shutdown of all services which are non-essential. Cinema sadly comes in that category. As a result, by March 18 or 19, all cinema halls were shut in the country, prompting filmmakers of upcoming films to indefinitely postpone their releases.

Here’s a list of all the films that were to release in March-end and April if all was well:

1. SANDEEP AUR PINKY FARAAR: This was to finally release on March 20. It’s a long-delayed film, allegedly due to not-so-great content. Starring Arjun Kapoor and Parineeti Chopra, the producers Yash Raj Films suddenly announced its release just 3-4 weeks before, after keeping its destiny in limbo for almost 1 ½ years. Many questioned the release strategy since Sooryavanshi was to release from March 24 evening and Sandeep Aur Pinky Faraar would not even have got 5 full days to earn. Some speculated that this was intentionally done as the producers were sure that the film anyway could not have earned much even if it had released on a good date. It is believed that this might be the first release once theatres open.

2. SOORYAVANSHI: People had already guessed this won’t make it on March 24 when the makers cancelled all promotions and also didn’t release any songs. It’s release was keenly awaited as no film had worked this year big time except Tanhaji: The Unsung Warrior. Everyone was sure that even in a worst case scenario, this could have earned at least Rs. 150 crore at the box office. If all goes well, this might release within 2-3 weeks of cinema halls starting. However, the commencement of Ramzan period might lead to the film’s further postponement.

3. ’83: It is based on the 1983 World Cup and has a lot of buzz going around. It stars Ranveer Singh as Kapil Dev, with Deepika Padukone playing his wife. Kabir Khan is directing this film whose pore-trailer promotions had also lead to considerable excitement. Its trailer launch was to happen on March 11 in the sprawling MMRDA Grounds in Mumbai in the presence of real-life cricket players, complete cast, producers and fans. But the Coronavirus scare had already began then and thus it was cancelled. Around 10 days later, they officially announced that the film has been pushed forward. It will see a release only after Sooryavanshi.

4. LOOTCASE: This is a slightly delayed film, starring Kunal Kemmu, Rasika Dugal, Vijay Raaz, Ranvir Shorey and Gajraj Rao. It was to release on October 11 but then the makers decided to release it online directly. Then came the news that it’ll release in cinemas, but on April 10. Many found this decision shocking as releasing on April 10 means clashing with the biggie ’83. Lootcase would have got crushed in such a scenario. It is expected that just like Sandeep Aur Pinky Faraar, this might also be one of the first release once normalcy returns.

5. GUNJAN SAXENA: It will be the second film of Janhvi Kapoor post Dhadak and is based on a real-life pilot who served during the Kargil War. Produced by Dharma Productions, this film is completely ready, including the trailer and poster. 2-3 weeks of promotion is enough for it and can take advantage if there’s no other biggie releasing in a week.

6. GULABO SITABO: This film stars Ayushmann Khurrana and Amitabh Bachchan and is directed by the master director Shoojit Sircar. Ayushmann is a force to reckon with now and hence, this film with 3 or 4 weeks of promotions, can arrive and draw audiences. The film will create tremendous buzz thanks to Ayushmann and Big B’s casting

7. LUDO: It is directed by Anurag Basu and consists of multiple stories. Star cast comprises of Abhishek Bachchan, Fatima Sana Shaikh, Rajkummar Rao, Aditya Roy Kapur and Sanya Malhotra. It is a urban multiplex film and can take advantage of a not-so-crowded week, sans any biggie.