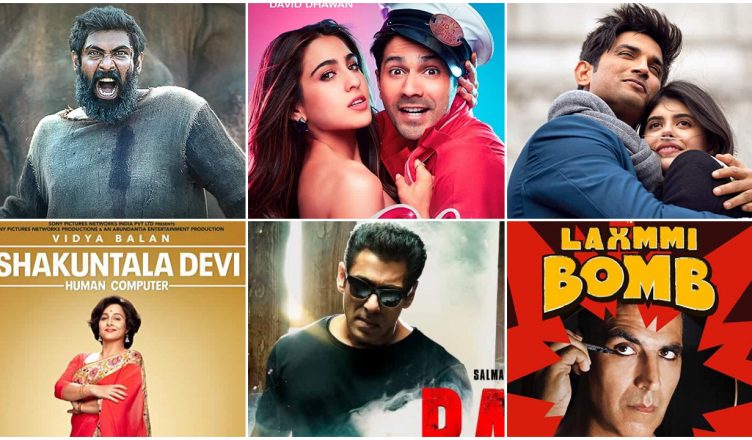 THESE ARE THE BOLLYWOOD FILMS AFFECTED BY CORONAVIRUS OUTBREAK – PART 2

Last week, we threw light on the 7 films that got affected due to the lockdown as a result of Coronavirus outbreak. Here’s a list of more films whose release has been postponed:

1. HAATHI MERE SAATHI: This is a trilingual film and will be released in Tamil as Kaadan and Aranya in Telugu. It stars Rana Daggubati in the leading role and as the name suggests, it is set in jungles amidst elephants. It looks quite different and much better than the last year’s action adventure Junglee, which also dealt with elephants. The teaser is spectacular with Rana in a never before seen avatar. Even Pulkit Samrat, who features in what seems like a supporting role, looks great. The film would have released tomorrow if the situation was normal. This could be one of the first releases once the theatres open

2. COOLIE NO 1: After Judwaa 2, David Dhawan and his actor son Varun reunited for another remake of the former’s film. Also starring Sara Ali Khan, Paresh Rawal, Jaaved Jaaferi and others, there’s a lot of excitement for this one. Such films often work well pan India and also later on television. It was scheduled to release on May 1 and it’ll take a while for it to release after the lockdown ends. That’s because its promotion hadn’t start at all and it’ll need at least 3 weeks to a month to promote its trailer and songs.

3. THE GIRL ON THE TRAIN: It is a remake of the Hollywood film of the same name and stars Parineeti Chopra in the lead role. The other actors in the film are Aditi Rao Hydari, Avinash Tiwary, Kirti Kulhari and Ishita Dutta. It’s a very small film aimed at urban centres. It should release probably in a week which will have no biggie’s release. There’s no way it’ll get a solo release and it’ll clash with a film or two of similar size.

4. DIL BECHARA: This is a remake of the Hollywood classic The Fault In Our Stars and marks the directorial debut of casting director Mukesh Chhabra. It stars Sushant Singh Rajput and Sanjana Sanghi in the leading role. The film is ready since almost a year and there are reports that producers Fox Star Studios are unsure of its commercial prospects. It was also said that they are in talks with Amazon Prime for a direct OTT release but the studio has denied it. Like The Girl On The Train, this remake of a Hollywood film was to also hit screens on May 8. And just like the Parineeti Chopra starrer, it’ll have to contend with a clash on a Friday which won’t be taken over by a biggie.

5. JHUND: This was the third film that was to release on May 8. It marks the Hindi debut of director Nagraj Manjule, of Sairat fame. Amitabh Bachchan stars in the lead as a football coach who teaches the sport to a group of slum kids. The presence of Big B and Nagraj’s direction will give this film a slight boost when it finally releases.

6. SHAKUNTALA DEVI: This was the fourth and final flick that was to release on May 8. Vidya Balan plays the role of Shakuntala Devi who was a famous mental calculator and called ‘human computer’ for her talent. Sanya Malhotra plays her daughter and looks quite unrecognizable. The film has potential to strike a chord among the multiplex audience, especially of the trailer is impactful.

7. RADHE: This is supposed to be the grand Eid release of 2020. It stars Salman Khan, Disha Patani, Randeep Hooda and Jackie Shroff and is directed by Prabhudheva. Due to Salman’s presence, there’s a lot of excitement for the film. Sadly, the shoot is still pending and with Eid around 50 days away, it’s difficult to say if the film can be completed and be ready on time. Also, there’s question mark if things will get normal by Eid. Even if it does, the films that were to come in March and April like Sooryavanshi and ’83 would arrive first. But knowing how important Eid is for Salman, Radhe might end up coming up on this holy festival.

8. LAXMMI BOMB: This was to clash with Radhe on Eid and stars Akshay Kumar in the role of a transgender. It is a remake of the famous Tamil horror comedy Muni 2: Kanchana and just like the original, Laxmmi Bomb is also directed by Raghava Lawrence. Akshay’s films are working big time and hence, trade is confident that it can work big time. However, fans would have to wait longer because Akshay’s Sooryavanshi would arrive first and Laxmmi Bomb would arrive only after at least 6-7 weeks.