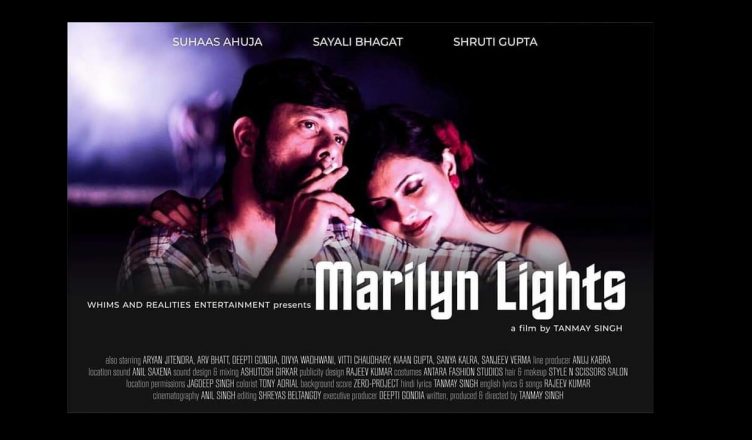 Marilyn Lights is an acclaimed short film by Tanmay Singh, starring popular actress Sayali Bhagat in a prominent role. I had seen Tanmay sharing posters of this venture and informing us how it has been making waves all around the world. This along with the title of the film and Sayali’s presence had made me really curious and even excited. Thankfully, Marilyn Lights meets expectations! It is the story of two-ex lovers who meet after 6 years in a coffee shop and what happens next. A series of flashbacks, a dream sequence and a cigarette brand also play a crucial role in taking the story forward. The beginning is quite thrilling and it might set a different sort of expectation. That was a bit disappointing. On the positive side, this 20-minute-long-film keeps one engaged with it’s direction and sharp dialogues (written and executed by Tanmay Singh). And Tanmay takes a risk by setting the film in Mumbai but shooting in Jaipur! However, those who don’t know about this fact would not even guess that the film isn’t shot in Maximum City. He also smartly shot the scene in Jaipur Metro and made it look like Mumbai Metro – even Mission Mangal makers weren’t so good cheating! Talking of performances, Suhaas Ahuja has a fine screen presence and handles his part well, especially the scene where he’s playing the guitar. Sayali Bhagat makes her presence felt and initially, her dialogue delivery seemed off. But later on, she does great. Shruti Gupta lends nice support and same goes for Aryan Jitendra. The rest of the team (cinematographer Anil Singh, editor Shreyas Beltangdy etc) also do a fine job. All in all, Marilyn Lights surely deserves to be seen and you won’t be disappointed!