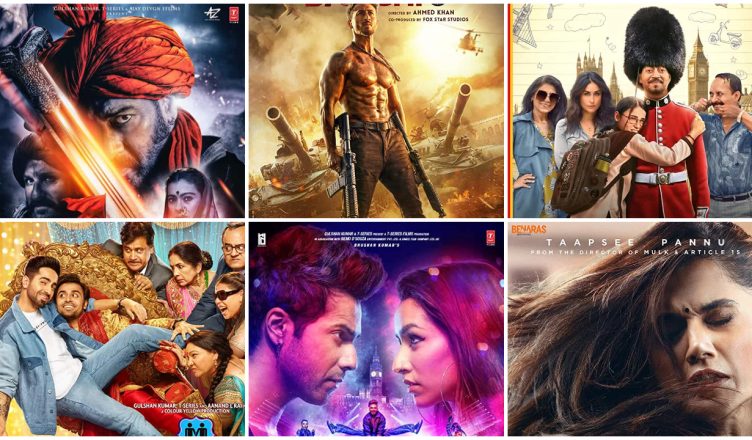 2020’S FIRST QUARTER SUFFERS A BIG DROP, AND NOT JUST DUE TO CORONAVIRUS!

A few years back, it was normal to not expect much from the business point view in Bollywood from the first three months of the year. Very few biggies used to release and it was said that a combination of reasons like cold wave, exams etc used to affect footfalls in cinemas. But things began to change from 2018. It saw a series of successful films like Padmaavat, Sonu Ke Titu Ki Sweety, Raid, Hichki and Baaghi 2. Padmaavat even in fact collected a mind-boggling Rs. 282.28 crore at the box office, despite not releasing in 4 states. Baaghi 2 too exceeded expectations with a business of Rs. 160.74 crore. Sonu Ke Titu Ki Sweety came with some hype but no one dreamed it’ll manage to cross the Rs. 100 crore mark.

The scenario got a bit better in 2019. It began with a bang with the blockbuster success of Uri. No one expected it to cross even Rs. 50 crore mark but it earned, believe it or not, Rs. 244 crore. Manikarnika – The Queen Of Jhansi was not a hit but accumulated Rs. 90 crore. Total Dhamaal had a lot of negativity among media and so-called intellectuals but masses made it a Rs. 150 crore grosser. Other films like Gully Boy, Luka Chuppi, Badla and Kesari too exceled at the ticket window.

As for 2020, it also started on an encouraging note thanks to Tanhaji – The Unsung Warrior. It was not a success in some states but the business in Maharashtra especially was so legendary that it ended its business with Rs. 269.70 crore. The other upcoming films too seemed exciting but sadly none of them worked well at the box office. Street Dancer seemed like a sure-shot hit to many but its opening was shockingly poor and so was its overall business. Love Aaj Kal started off well but public response was terrible. It opened at Rs. 11.47 crore but its lifetime earnings didn’t even cross the Rs. 35 crore mark! BHOOT: Part One – The Haunted Ship was Vicky Kaushal’s first film after Uri but its niche appeal and mixed word of mouth proved detrimental. Meanwhile, a lot was expected from Chhapaak and Panga. But these women-centric films proved to be flops.

By the time it was March, the Coronavirus scare began to increase day by day. Baaghi 3 had minimal impact of it initially but its opening got affected by lack of considerably hype and word of mouth. It ended it’s week one at Rs. 86.73 crore and it’s lifetime would have been around Rs. 115 crore. But sadly, cinema halls began to gradually shut from its 6th day of release. By the time it was its 11th day (March 17), cinema halls had shut across India. It’s collection stood at Rs. 92.31 crore and it’s said that it’s unlikely that it’ll re-release after normalcy.

Angrezi Medium was the unfortunate one as it released a day after Delhi government shut its theatres. On Day 2 of release, most centres of Maharashtra were closed down. Slowly, all other states also followed suit. It’s lifetime was a mere Rs. 9.06 crore. Despite Delhi shutdown and the fear, it had a decent opening of Rs. 4.03 crore. Hence, a Rs. 5 crore opening was possible if things were normal. Many missed watching it and it was hoped that it’ll resume its run once theatres open. A few days ago however, it arrived on digital platform Disney+ Hotstar. The inside news is that it the OTT giant handsomely paid the makers for its rights.