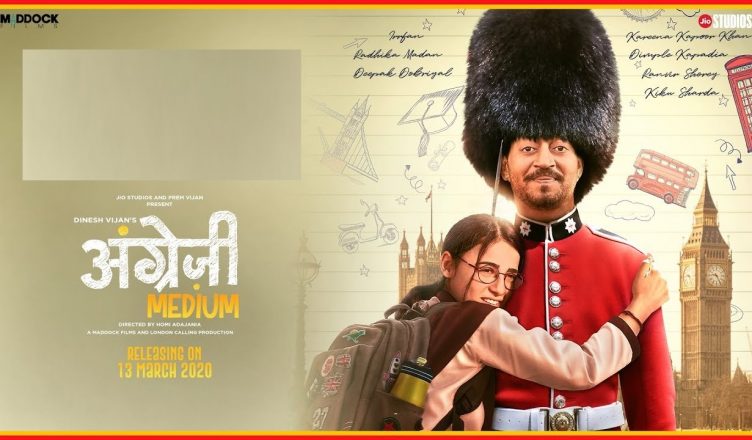 WILL ANGREZI MEDIUM BE AS SUCCESSFUL AS PART 1?

One of the biggest success stories of 2017 was that of the film Hindi Medium. It released at a time when Bollywood films were not doing well and the Telugu film Baahubali 2 had become a blockbuster. Bollywood had to get back to the top to save its face. This is when this small film with a big heart arrived in cinemas. The opening was nothing great but slowly and steadily, it started attracting audiences. Ultimately, it did a business of Rs. 63.06 crores – a figure no one in their wildest dreams imagined that the film will be able to reach.

And now expectations are huge from Angrezi Medium as well, the second part of this franchise. The first part was a story of parents who wanted to send their only daughter in a reputed school. In Angrezi Medium, Irrfan Khan plays the only parent who is at a dilemma as to how to fulfil his daughter’s wish of studying abroad. Besides Irrfan Khan, the film also stars Radhika Madan, Deepak Dobriyal, Ranvir Shorey, Kiku Sharda and Pankaj Tripathi. Kareena Kapoor has an extended special appearance and her mother is played by Dimple Kapadia. The film is directed by Homi Adajania,  who previously has helmed Being Cyrus, Cocktail and Finding Fanny. The trailer of the film is lovely. Moviegoers were happy to see Irrfan Khan in top form, especially because this is the first film he has acted in after being diagnosed with neuroendocrine tumour.

The film however has challenges. The trailer is decent but the excitement is not as much as it was for Hindi Medium. That film had a slightly more entertaining trailer and hit songs like the remixes of ‘Oh Ho Ho Ho’ and ‘Suit Suit’. Angrezi Medium’s soundtrack hasn’t become a chartbuster at all. Thankfully, it is a solo release but at the same time, the Coronavirus scare might keep audiences away from cinemas, according to a section of trade and industry. But how much it will affect is debatable, with some believing that the decline in footfall would be as low as 5-10%.

Hindi Medium opened at Rs. 2.50 crore and had a weekend of Rs. 11.79 crore. That film also got the benefit of Tax-Free status in Maharashtra since the time of its release and in Madhya Pradesh and Delhi from Week 2 and 3 respectively. Angrezi Medium might open in the same range or in the Rs. 2.50-3 crore range. If response is positive, the collections can rise from Day 2 and the weekend collections can be in the Rs. 14-15 crore bracket. The next week has a very weak competition and hence Angrezi Medium can have a free run till the release of Sooryavanshi from March 24 evening. Whether it’ll reach the lifetime collections of Hindi Medium seems unlikely because of competition from Sooryavanshi. Hindi Medium, on the other hand, had no such roadblocks. If response however is not encouraging, then Angrezi Medium will have a tough time to even reach the Rs. 25 crore or Rs. 30 crore mark.