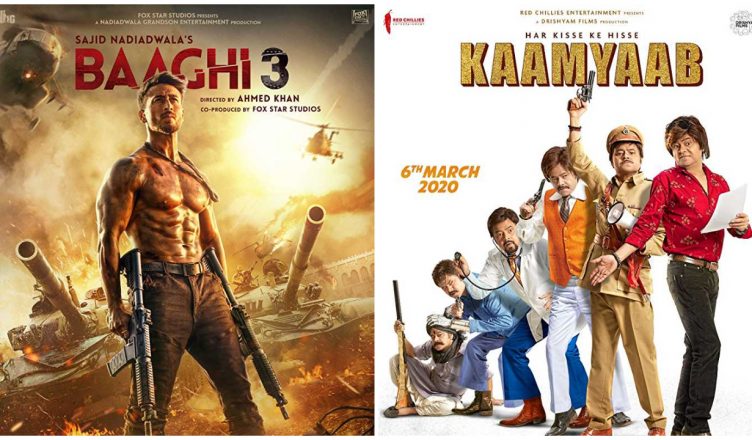 WILL BAAGHI 3 AND KAAMYAAB WIN THE PERCEPTION BATTLE?

Often, new actors take a few years and films to get a place in the heart of the audiences. But Tiger Shroff is an exception. He was loved by masses in his debut film Heropanti so much that he instantly became their favourite. This was evident with his second film Baaghi that had a smashing opening. The way the moviegoers reacted to his scenes made it clear that he’s here to stay. Audiences especially loved him in his Baaghi avatar. Baaghi 2 released in 2018 and stunned everyone as it took a record Rs. 25 crore opening. Of course, it got the advantage of Good Friday holiday but still, to get such a huge opening is a feat.

And now expectations are obviously tremendous from Baaghi 3, which releases tomorrow. It brings back Shraddha Kapoor, lead actress of first part, as his co-star. Baaghi 2 heroine Disha Patani will be seen in an item number. The other actors of the film are Riteish Deshmukh, Ankita Lokhande, Jaideep Ahlawat and Vijay Varma. In keeping with the Baaghi theme, Tiger Shroff would be seen doing the unthinkable. In the first part, he entered a building full of dangerous goons and defeated them all. In part 2, he entered an enemy camp in a jungle. In Baaghi 3, however, he is all set to defeat a country single-handedly! The trailer is massy and the film is mounted on a huge scale. Tiger, as always, seems in top form. Songs have not worked big time, but Dus Bahane 2.0 has been registered and has helped in creating hype for the film.

The film however has challenges. The trailer got trolled due to Riteish’s overacting. Also, critics feel that logic indeed takes a backseat in such films. But to show Tiger defeating an entire country is far-fetched. Even masses won’t really accept any illogical stuff and there has to be some degree of believability. Also, music lags behind the superb soundtrack of the first 2 parts. A slightly more hit song would have helped the film.

Baaghi 3 is set for a huge opening but even if it does that, it might not be able to achieve the first-day earnings of Baaghi 2, as it releases on non-Holiday Friday. The opening should be around Rs. 20-21 crore. If word of mouth is positive, a weekend of Rs. 70-75 crore would be ideal. Then it has another challenge – of crossing the lifetime figures of Baaghi 2 (Rs. 160.74 crore). There’s a mid-week holiday in the form of Holi but that doesn’t really help as many theatres are shut till afternoon or even till 6 pm in some areas.

The other release of the week is Kaamyaab. It stars Sanjay Mishra in the lead role and plays an entertaining character actor who is on a quest to act in his 500th film. The trailer is quite entertaining. Moreover, Shah Rukh Khan came on board and he’s presenting this film. His presence has helped the film get a push. Also, the promotions have been extensive for a film of this scale. Sadly, audiences feel it’s too niche. Hence, the opening will be very poor, around Rs. 40-50 lakhs. Last year, Mard Ko Dard Nahin Hota opened similarly in Holi week, clashing with a biggie (Kesari) and opened at just Rs. 31 lakhs. Kaamyaab will do better and it seems more mainstream that Mard Ko Dard Nahin Hota.

Kaamyaab however has a chance if response is positive. Saturday and Sunday collections can increase manifold and Monday can be same or more than Friday. It has competition from Baaghi 3 but that’s more for masses while this one is for multiplex audience. The next few weeks have lesser competition and if Kaamyaab manages a lifetime of even Rs. 10 crore, it’ll be a good result for the film.