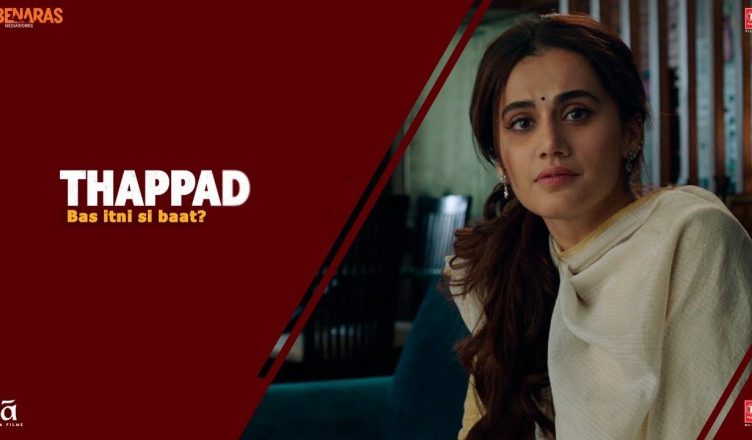 WILL TAAPSEE PANNU BE THIRD TIME LUCKY WITH THAPPAD?

Taapsee Pannu has slowly and gradually become one of the most credible actresses today. This all began in a way when she did a action-packed supporting role in Akshay Kumar-starrer Baby. She then cemented her position with Pink. Last year, she surprised as Badla emerged as one of the biggest hits of 2019, earning Rs. 87.56 crore. Of course, one can’t deny that Amitabh Bahchan’s presence also played a part in making the film a success. But at the same time, she also enjoys trust amongst multiplex audience and that has added to her brand.

Now she’s all set to present Thappad, which releases tomorrow. It is directed by Anubhav Sinha, whose 2.0 avatar gave us hard-hitting films like Mulk and Article 15. Thappad is in the same zone and yet differs. It’s about a housewife who is enjoying her married life until one day, her husband slaps her in a party. How her life changes and how she decides to fight forms the crux of the film. The trailer is excellent and has raised curiosity. Taapsee seems to be in top form.

Thappad also has the advantage of releasing solo. Last week’s Bhoot: Part One – The Haunted Ship has underperformed while Shubh Mangal Zyada Saavdhan is not a bit hit. Hence, Thappad will get maximum shows and can take full advantage of one-week period before Baaghi 3 storms in cinemas. Even after Baaghi 3’s release, it can continue to earn among top multiplexes. That Women’s Day falls on Sunday March 8 might add to the collections marginally.

Thappad also faces some challenges. The subject and treatment is niche. Many audiences, even among the elite, might find it difficult to accept that the woman wants to separate just because she got slapped that too only once. Also, Taapsee’s track record is not consistent. In between she has given flops like Game Over and average film like Saand Ki Aankh. The latter especially got affected due to bad release. Thappad can open in the range of Rs. 2-3 crore. It can dramatically grow on Saturday and Sunday, as it happens with such films, if reports are positive. If Monday is close to Friday or higher, then the film can run even till Sooryavanshi! However, a bad word of mouth will prove detrimental.

WOULD YOU LIKE TO SEE THAPPAD AND WHY? DO LET ME KNOW!