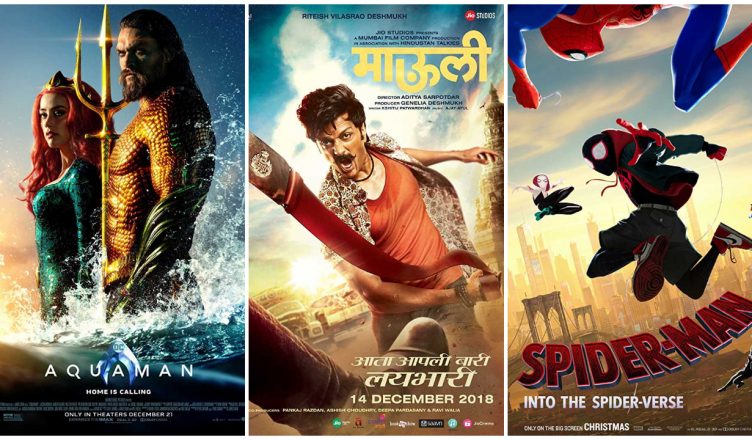 MARATHI AND HOLLYWOOD FILMS TO DOMINATE THIS WEEK!

The third last Friday of 2018 is here. Since two big Hindi films are going to release in the next two weeks, this week will have no Hindi release. Taking advantage of the void, a prominent Marathi and Hollywood flick would be out. Both the films look exciting as the buzz for both is strong. My views:

MAULI: This Marathi film is the part two of Lai Bhaari, produced by and starring Riteish Deshmukh. It also starred Radhika Apte and Sharad Kelkar and was directed by Nishikant Kamat. Released in 2014, it was a super-hit at the box office and was a rare Marathi film that was made in typical Bollywood masala potboiler style. The part two was announced immediately but it took more than four years for it to release. Riteish features in the story once again and opposite him is Saiyami Kher. And instead of Nishikant Kamat, Aditya Sarpotdar has donned the director’s hat. The trailer looks very interesting and massy. This time, the plot deals with water mafia. Riteish once again plays Mauli, which was a very interesting and fun character and it’ll be quite great to see him again in the same avatar. Mauli will have a limited release outside Maharashtra. But in the home state, it’s sure to have a huge opening and can create a riot in the interiors. It’s collections will be affected after the release of Zero next Friday but nevertheless, the week one earnings would be more than enough and later, it can go steady at low levels. The response of course has to be positive. Lai Bhaari was the first Marathi film to cross the Rs. 40 crore mark. Here’s hoping Mauli can at least go past the Rs. 50 crore mark!

AQUAMAN: It is a superhero film and the sixth film in the DC Extended Universe. This franchise has taken a bit of a hit due to the underperformance of Batman vs Superman: Dawn Of Justice and Justice League. Wonder Woman however was positively received. And Aquaman too carries a positive buzz. The character is entertaining and actor Jason Momoa seems to be enjoying the part. Moreover, James Wan has been brought in board as the director. He has helmed several hit films in the past like Fast & Furious 7, The Conjuring, The Conjuring 2, Saw and Insidious. The various trailers have upped the excitement. The response from critics and audiences in China (it released there on December 7) has been very favourable. Aquaman is scheduled to release in USA on December 21 and in most part of the world. But due to Zero, Warner Bros India decided to instead come on December 14. With such a strong buzz, Aquaman can have an opening of Rs. 6-7 crore. The Hindi version can also work since the film looks entertaining and massy, unlike other films of DC in the past.

Lastly, there’s Spider-Man: Into The Spider-Verse, an animated film featuring various versions of the superhero in different shared multiverse. The idea is innovative and the trailer has been loved. The response from critics in India and west alike has been unanimously positive. But because of limited buzz, the opening won’t be huge. Also, it has very little chance in dubbed version and this can also affect its business in India.