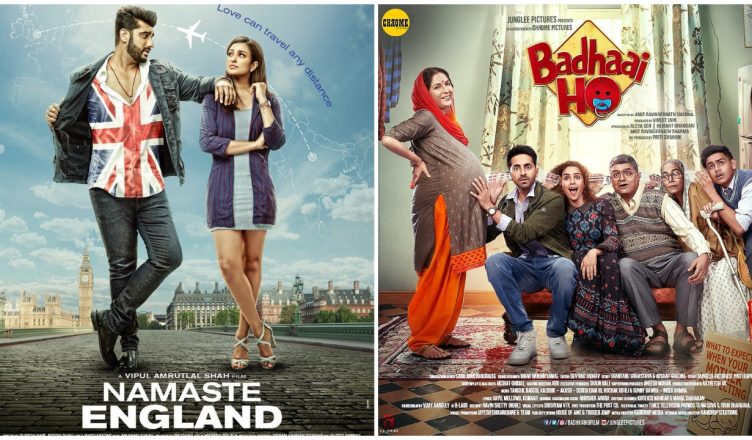 Last week saw the release of as many as 4 films and all of them have bombed at the box office. Even if these films had enjoyed a good word of mouth, it would have been difficult for them to score due to overcrowding. This Friday too, a similar scenario would have arisen. 3 significant films were to hit screens but better sense prevailed and only 2 of them are now releasing. Both these films actually are releasing on Thursday instead of Friday since the festival of Dussehra falls on the former. My analysis:

NAMASTE ENGLAND: It is the second part of the franchise, the first part of which was titled Namastey England and released in 2007. It starred Akshay Kumar and Katrina Kaif and was directed by Vipul Shah. Vipul directs Namaste England as well and he returns as a director after 8 years. The cast has been changed to Arjun Kapoor and Parineeti Chopra. The film seemed interesting and also had buzz when it was on floors. The posters came out long back and helped maintaining the interest. However, the trailer spoiled things for the film. From the promo and the songs, the film began to seem unexciting. The plot of the film is interesting but the goings-on seem very superficial, at least in the trailer. To keep the damage in check, the makers released one more trailer some time back but it didn’t help. The film is releasing on a holiday which will help the film get some respectable opening. But still, it won’t be more than Rs 5-6 crore. The film however has a chance if word of mouth is positive.

BADHAAI HO: This film’s costs are smaller as compared to Namaste England. But it has generated tremendous excitement among viewers. It’s story is unique – a woman in her 50s gets pregnant at a time when her elder son is about to get married. Starring Ayushmann Khurrana, Sanya Malhotra, Gajraj Rao and Neena Gupta, it is directed by Amit Sharma who earlier made Tevar. With Badhaai Ho, it was vice versa when compared to Namaste England – there was no buzz prior but it went on a high with the funny and hilarious trailer. It became a talking point as a lot of people could relate to it and most of them having their own stories to tell of how they know someone who became a mother quite late in life. The songs didn’t became hits but the trailer has done its job. The opening can be around Rs. 7-8 crore. But it’s a holiday and hence, don’t be surprised if it crosses the Rs. 10 crore mark on day 1! This would surely give a boost to Ayushmann Khurrana who has been doing some great films but they aren’t opening well.