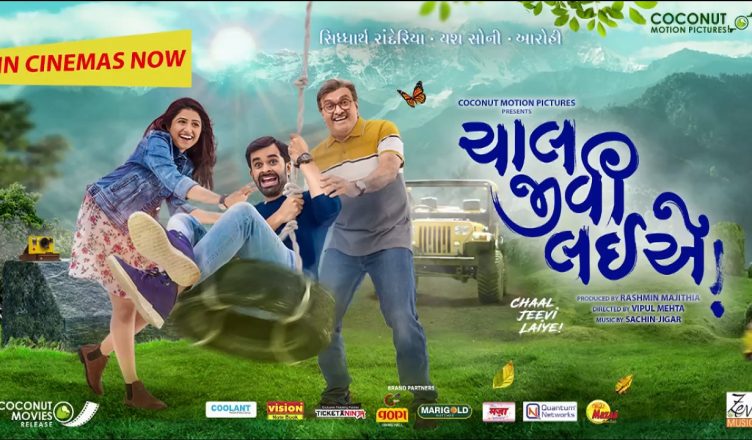 In today’s times, when even completing 50 days in theatres for movies is a feat, a Gujarati film, Chaal Jeevi Laiye, has managed to do the unthinkable. Released on February 1, 2019, it is currently running in its 34th week in around 10 cinemas! What’s more, it’s still getting record occupancy, sometimes even more than that of latest releases!

To explain the madness, let us give you an instance of the film’s historic run in a theatre named Inox Raj Imperial in the city of Surat, Gujarat. In the previous weekend, the film had 42 admits and 57 admits on Friday September 13 and Saturday September 14 respectively, in a 75 seater screen. On Sunday September 15, it ran with full occupancy. On Sunday August 25, Chaal Jeevi Laiye was running with 4 shows a day in this Surat multiplex and the average occupancy was a mind-boggling 81%! During ‘dry weeks’, that is, when there were no major Hindi or English release, Chaal Jeevi Laiye was similarly allotted multiple shows and it did very well. Not just that, on May 17, the day the Ajay Devgn-starrer De De Pyaar De released, Chaal Jeevi Laiye was in its 16th week and the morning show occupancy in a 220-seater screen was nearly 68%, that is, more than that of the former! The nett collections of the film in Inox alone are a huge Rs. 6.40 crore.

However, lovers of Gujarati cinema are not aware of the monumental achievements of Chaal Jeevi Laiye. A chief reason is that producers never talked about it in the first place. Any other filmmaker would have promoted this fact but the producers of Chaal Jeevi Laiye – Coconut Motion Pictures – chose not to. Producer Rashmin Majithia explains, “We had pre-decided that we won’t boast about our film’s success by giving box office figures. Chaal Jeevi Laiye is an emotional film and its vibe would have been affected if we had gone all out by bragging about its record figures.”

That’s precisely the reason why the CEO of Coconut Motion Pictures, Ritesh Laalan, refused to share the exact all-India nett collections till date, to this writer. He however reveals, “The gross collections of the film are more than Rs. 50 crores. The film is in its 34th week and is running in more than 10 cinemas. Recently, our director Vipul Mehta was in Bhuj and he told us that the film was still running there.” He further adds, “In places like Surat this has not happened but in other centres, the exhibitors don’t give shows to Chaal Jeevi Laiye on Friday and Saturday due to multiple new releases. But from Sunday onwards, they cancel the shows of those films that are not doing well and replace it with that of Chaal Jeevi Laiye!”

A success of this sort must have been impossible to predict for most but Ritesh Laalan partly disagrees. He explains, “I used to tell people around me before the release that Chaal Jeevi Laiye would emerge as Gujarati cinema’s biggest film. But obviously, nobody believed me. Some of them used to even laugh at me and ask me ‘kitna kar lega’. When the film breached the Rs. 25 crore mark, I expected the collections to fall down rapidly. But the film crossed Rs. 35 crore mark. Again, I thought that this is it. However, I soon realized that people just want to see a good Gujarati film and this film is ideal in this regard. In the last six months, it’s only the repeat audience that’s coming to see the film as a well-made Gujarati film is missing.”

Rashmin Majithia adds here, “Moreover, we haven’t given the film on any OTT platform or on television. So the only option to see the movie is in cinemas. Viewers are going again to laugh and to cry with the characters. I believe that viewers are ready to accept Gujarati films with open arms but it has to be worth their time and money. And the way it has worked in urban and even semi-urban places like Bhuj shows that Chaal Jeevi Laiye has connected across various sections of audiences.”

What Ritesh Laalan and Rashmin Majithia were not able to pre-empt was how Chaal Jeevi Laiye would be received outside Gujarat. Rashmin exults, “In the first 20 weeks, Mumbai was dominating and was contributing to 25% of the film’s collections. Usually, Ahmedabad contributes 50% of a Gujarati film’s collections but for the first time, Mumbai outperformed. Ahmedabad did come up ultimately but still both cities were neck to neck. And that was unexpected since there’s a difference between Gujarati viewers in Mumbai, who are more inclined towards Bollywood, and that of Ahmedabad.” He then adds, “Chaal Jeevi Laiye ran for 26 weeks in Mumbai, in Carnival Moviestar and for around 22-23 weeks in Sangeeta Cineplex.”

What Rashmin Majithia shares next is surely impossible to believe. He tells, “In a city like Pune, it ran for more than 15 weeks, that is, it crossed 100 days. We couldn’t believe it. Not just that, it completed 8 weeks in Nashik and 4-5 weeks in Kolhapur. At a town near Kolhapur, it was there for around 3-4 weeks!” What about down South? “In cities like Bengaluru and Chennai, the film ran for only a week or two. After that, viewers would ask for special shows,” he says which also is an achievement for a Gujarati movie. Needless to say, Chaal Jeevi Laiye is the first Gujarati film to achieve these feats. “Even Chello Divas had a record run but not for such a long time in these centres,” says Rashmin Majithia.

Even on weekdays and despite completing more than 30 weeks, Chaal Jeevi Laiye continues to get viewers. In the current week in Inox Raj Imperial, Surat, for instance, the film has been allotted two shows in Screen # 4 – one at 11:40 am and the other 5:05 pm. For the Monday September 23 5:05 pm show, already 4 tickets have been sold 2 and a half hour before.

The makers are not surprised however, at least not anymore! Rashmin Majithia says, “No show has run without any viewer. At Rajkot, on a Sunday, the film runs with 90% occupancy. We don’t disclose these numbers also because many people are not able to believe.” And it’s not just Gujaratis that are watching this film. Ritesh narrates, “Even Marwaris are coming out in large numbers. I was watching Chaal Jeevi Laiye in Mumbai and the entire auditorium was filled with them. I asked them whether they can understand Gujarati and they replied in the affirmative.” Mind you, there are no subtitles in this film either!

The Coconut Motion picture management’s next target is to reach the 50th week, which will happen on January 17, 2020. “We had done a celebration when the film completed 100 days, since we were not that confident about its run from thereon. But then it did silver jubilee and we celebrated that feat as well. Now I am sure very soon, we’ll be celebrating the 50th week completion of Chaal Jeevi Laiye too,” says Rashmin Majithia confidently.

To say that the producers are laughing all the way to the bank would be an incorrect statement. For they are donating the 100% of the share! Rashmin Majithia tells, “From 100th day onwards, we announced that whatever the film will earn, we’ll use it for the service of old people. Every week we publish an ad of the film in newspapers where we mention that if you are watching this film now, the proceeds are going to charity.”

Chaal Jeevi Laiye is the story of a workaholic son who takes his terminally ill father to a holiday in Uttarakhand to fulfil the latter’s last wish. On the way, they meet a girl named Ketki and the trio take an unexpected and most satisfying journey of their lives. Starring Siddharth Randeria, a superstar of Gujarati theatre and cinema along with Yash Soni and Aarohi Patel, it is directed by Vipul Mehta and has music by Sachin-Jigar, who has also made a mark in Bollywood. Even the Hindi film industry have noticed the film and praised it. Notable among them was Madhuri Dixit, who tweeted in praise of the film on May 22.

Chaal Jeevi Laiye was also one of the 28 films shortlisted by the Film Federation of India for official selection at the 92nd Academy Awards.

Just watched #ChaalJeeviLaiye & I must say what an endearing story with such a simple yet effective narration! Direction, cinematography, music… everything binds the film together. Kudos to #VipulMehta, @SachinJigarLive and the entire team on such a brilliant job 👏🙂

2 thoughts on “EXCLUSIVE: This GUJARATI film has created HISTORY and is running in cinemas since 8 MONTHS!”