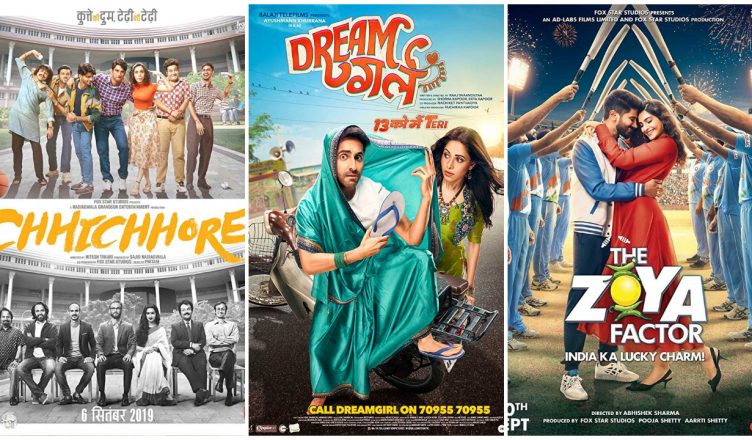 SEPTEMBER TO END ON AN UNPREDICTABLE NOTE!

This Friday will see the release of no significant Hindi film as the much hyped War releases on Wednesday October 2. The three weeks of September have all been quite unexpected, in positive and negative ways.

The first Friday, September 6, saw the release of Chhichhore. The buzz was very limited and yet, it opened at a decent Rs. 7 crore. Saturday and Sunday saw huge jumps. But then came the weekdays and the film had the most extraordinary hold in a long time. Usually, Monday collections of a film are 50% or less than that of Friday. But in case of Chhichhore, the film collected more than on Friday on Monday, Tuesday and Thursday. Of course, the Muharram and Ganesh holidays played a major part. But one can’t deny that the content struck a tremendous chord with the viewers. The collections of the film till Sunday were Rs. 120.28 crore and the film is expected to have a lifetime earnings of Rs. 128-130 crore approx. Chhichhore stars Sushant Singh Rajput whose last film Sonchiriya shockingly had collected just Rs. 5.58 crore. As a result, Chhichhore’s super hit success was all the more a surprise.

The next week saw the release of Dream Girl, another super-hit film of the month. It’s success was in a way expected as the trailers and songs seemed highly entertaining. This was reflected in its opening of Rs. 9 crore. However, the film went beyond expectations and was an ideal laugh-a-minute riot after ages. On Tuesday, it crossed the Rs. 100 crore mark and it’ll have a lifetime of around Rs. 120-125 crore. Its collections hence will be less than that of Chhichhore. If it had an empty fourth week like Chhichhore, Dream Girl would have gone beyond the Sushant Singh Rajput starrer.

And then came September 3rd week. 3 films released on September 20 – Pal Pal Dil Ke Paas, Prassthanam and The Zoya Factor. All three had dismal opening as the excitement was just not there. Pal Pal Dil Ke Paas, Prassthanam’s poor performances were expected. However, trade and industry have been left shocked by how The Zoya Factor performed. Starring Sonam Kapoor and Dulquer Salmaan, it seemed like the first choice of moviegoers, at least in major multiplexes. But it had the worst opening, at Rs. 70 lakhs. Saturday and Sunday were flat at Rs. 80 lakhs each. The hope was that it’ll remain in the Rs. 60-70 lakhs on Monday at least. But Monday was horrible as it earned just Rs. 15 lakhs! The film won’t even cross the Rs. 3 crore mark! A bonafide A-grade film have not seen such disastrous collections ever as far as I can recall. Even outright rejected films with some sort of star presence and decent promotions like Helicopter Eela (Rs. 4.29 crore), Why Cheat India (Rs. 8.58 crore), Game Over (Rs. 4.69 crore approx) did better than The Zoya Factor.

So what went wrong when it comes to The Zoya Factor? Watching the film made me realize that the film’s major chunk is a sports drama, with the Indian Cricket Team trying to win the World Cup. But the marketing of the film focused more on Sonam Kapoor followed by her romance with Dulquer Salmaan. These promos however were strictly average. Sonam is no Alia Bhatt or Deepika Padukone who could pull of a film despite not-so-great trailers. Songs didn’t work much either. Sonam’s 5-year-old film Khoobsurat opened at Rs. 2.34 crore and it had far better promos and songs and perhaps, the makers tried to adopt the same kind of marketing tactics for this film too. Had The Zoya Factor capitalized more on the cricket bit, then perhaps the opening would have been at least more than Rs. 1 crore. The film would have still flopped but that would had happened with some respectable collections.

The other significant movie of the month was Section 375, which released on September 13, alongside Dream Girl. The film got noticed a bit thanks to its excellent word of mouth. The lifetime collections are expected to be around Rs. 12-13 crore, which is not much but for a film that has no songs and niche appeal, it’s a decent result.