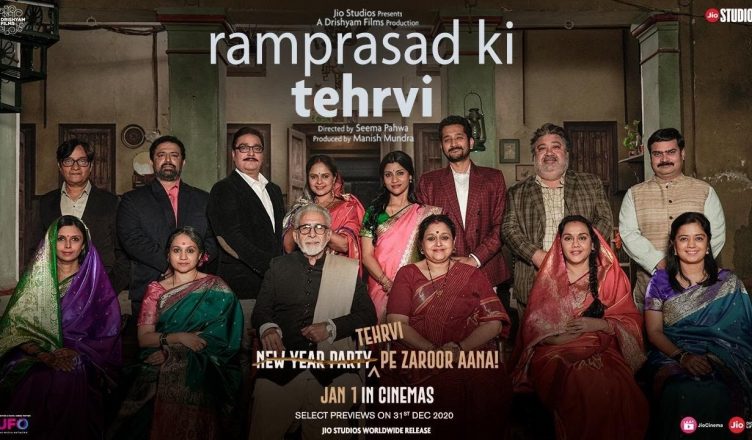 Ramprasad Ki Tehrvi, written and directed by Seema Pahwa, rests on a very interesting and a relatable idea. There’s no way one can’t relate or connect with the goings-on. We all have been in the situation, depicted in the film, at some point in life. The characters are quirky but as they peel off their layers, it makes the goings-on very interesting. The second half is too poignant and emotional. It works, thankfully, but a few developments are not upto the mark. The backstory of a crucial character is missing. In it’s absence, the desired impact is just not made as several questions remain unanswered. A few subplots also seemed to be added for the heck of it (especially Konkona-Vikrant one). The finale is endearing but very sudden. The performances are exemplary and compensate for the minuses to an extent. The film belongs to Supriya Pathak. You can feel her pain as she realizes how alone she actually is despite every family member being there with her in times of crisis. Easily, one of her finest performances in her illustrious career! Naseeruddin Shah has a cameo but leaves a huge mark. Konkona Sen Sharma, as expected, is excellent. If only her character was well fleshed out, it would have gone on another level. Vikrant Massey is confident and a pleasure to watch, as always. Parambrata Chhatterjee is efficient. But it’s the actors who play his brothers – Manoj Pahwa, Vinay Pathak and Ninad Kamat – that rock the show. Sadiya Siddiqui, Divya Jagdale and Deepika Amin also make their presence felt. Anubha Fatehpura (Rani; badi jiji) and Sarika Singh (Dhaani; choti jiji) deliver fine performances. Two actresses who deserve a special mention are Manukriti Pahwa (Bitto) and Sanah Kapur (as younger Amma). Both prove how screen time is not important to give memorable performances! Others like Brijendra Kala (Prakash; bade jija ji), Sawan Tank (Samay), Neivan Ahuja (Saksham; neighbour’s kid), Shrikant Verma (Basant Chote jija ji), Yamini Dass (Mami ji), Vineet Kumar (Mama ji), Rajendra Gupta (Tauji who spoke English) and Mahesh Sharma (Vinod, who was with Tauji) are decent. All in all, Ramprasad Ki Tehrvi is a fine effort and surely deserves a watch for it’s performances, script and the emotional and funny moments! (P.S.: Released only in CINEMAS)