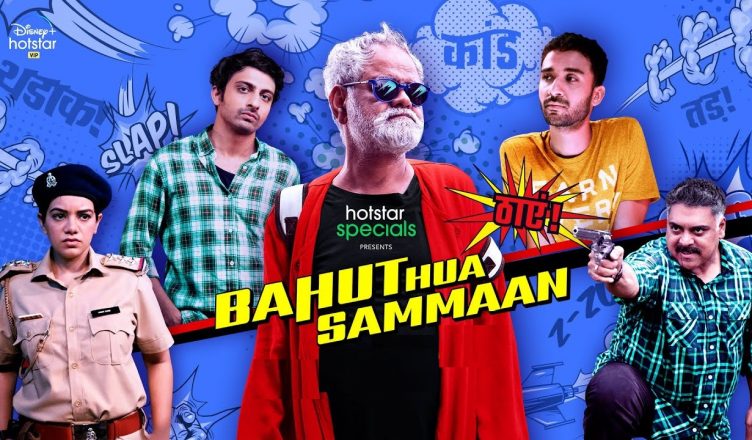 Bahut Hua Sammaan is a Disney+ Hotstar original feature film which released on October 2 starring Sanjay Mishra, Ram Kapoor, Raghav Juyal, Abhishek Chauhan and Nidhi Singh in prominent roles. The beginning portions of the film don’t really work and the humour seems forced. But 20 minutes later, the film picks up very well and turns out to be a fun ride. It is the story of two university students, with no bright future, deciding to loot a bank on the campus, after being prodded to do so by a mysterious person. How their act rattles not just the university dean and the cops but some of the most influential people in the country forms the rest of the film. The dialogues are smart and director Ashish R Shukla and writers Avinash Singh and Vijay Narayan Verma‘s political viewpoint comes to the fore at several places. And they seem quite unapologetic about it. Talking of performances, Raghav Juyal and Abhishek Chauhan are in their element and play the role of Fukrey-type guys well. Nidhi Singh suits the part of the tough and honest cop. Ram Kapoor is superb as the ruthless villain. Flora Saini as always is dependable. Sanjay Mishra however takes the cake. He gets to play a kickass role and he kills it! After Kaamyaab, this is yet another legendary performance from the talented actor! The background score and the use of old songs gives a nice touch. All in all, Bahut Hua Sammaan is a nice, timepass flick. It’s an ideal movie to catch when you meet up with your friends next!