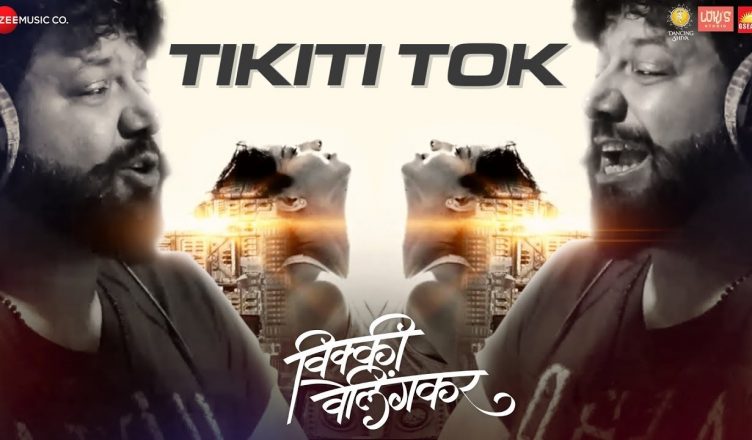 After releasing the thrilling teaser, the team of Vicky Velingkar have now dropped the video of the song ‘Tikiti Tok’. What makes the song worth listening is because it’s sung by Avadhoot Gupte and Omkar Patil. Omkar is also the music’s composer. The other reason why this song is worth a try is because it’s the pop-rock space. The lyrics, by Sumit Tambe, add to the charm as it deals with the importance of time in our life.

The video majorly focuses on the recording bit, a la Why This Kolaveri Di. This portion of the video is great but the attempt to show the film’s lead actress Sonalee Kulkarni stylishly using various editing effects doesn’t really work. Instead, these shots should have been replaced by scenes of the film, especially the ones shown in the teaser which was very well received on social media.

Avdhoot Gupte, meanwhile, while speaking about his experience says, “‘Tikiti Tok’ is a pop-rock type of song and I enjoyed it very much while recording it. Omkar Patil has composed the song very well and his efforts deserve all praising. I am sure that the song will be enjoyed by the filmgoers. I am happy to be associated with the film like Vicky Velingkar which is very different from the rest of the movies. It’s a type of film rarely seen in Marathi industry. Marathi audience will love the film and I would request them to go and watch in a theatre near them.”

Singer and music director Omkar Patil states, “Tikiti Tok Tikiti Tok, Time Milala Gheun Tak’ has been composed with madness within me. To bring that madness into reality, the music directors generally choose the singer once the composition is ready. But for me Avdhoot was the choice for the song from the very beginning. His style of singing and the sincerity behind it comes from within. He said yes to sing ‘Tikiti Tok…’ immediately after I narrated it to him. It was a pleasant experience to work with a leading composer like him. I am glad that he has appreciated my work.”

One thought on “Vicky Velingkar’s first song ‘Tikiti Tok’ is out and gathers praise on social media!”