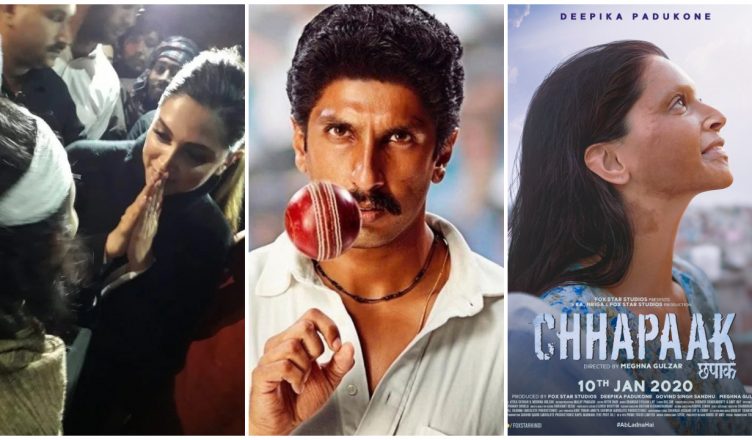 Exactly a week ago, Deepika Padukone’s film Chhapaak seemed non-controversial. A section of audience was interested to see it. The rest weren’t; a large part of the population didn’t even bother about this flick. But then all hell broke loose as the actress visited the most hated place for some Indians – the Jawaharlal Nehru University (JNU). She met the student president Aishe Ghosh, who was injured in a recent attack along with many other students. She stood in silence, in solidarity, in the presence of activists like Kanhaiya Kumar. As expected, within no time, the IT cell machinery of the ruling BJP government went into an overdrive. They launched a vicious attack on Deepika Padukone and even managed to find her 2011 interview wherein she praised Rahul Gandhi. Of course, they conveniently chose to hide that she said called Rahul the future Prime Minister of India at a time when many in the country didn’t find him a ‘Pappu’. The most laughable was that they spread a lie that her film Chhapaak, which is based on real incidents, has changed the religion of the attacker from Muslim to Hindu! It turned out to be a blatant lie. To save their faces, they claimed that originally, the said character was a Hindu and it’s only because they raised voices is that the change was made. Obviously, they had no answer when asked which cutting-edge technology was used to alter the lip movement when the character’s name was uttered many, many times in the film!

And like it always happens in such cases where someone goes against the BJP, their infamous and notorious IT cell started the #BoycottChhapaak trend. It got lakhs and lakhs of tweets. As part of this campaign, they began to encourage the other film releasing with Chhapaak – Tanhaji: The Unsung Warrior. This film was a saga of an unsung Maratha hero who fought the Mughals. Moreover, it starred Ajay Devgn, who has never visited JNU or Jamia and in fact, once went to Bihar to support BJP during 2015 elections. Thus, this film ticked all the right boxes. So anti-Chhapaak crusaders overnight became pro-Tanhaji fanatics, when 90% of them didn’t care about both the films 12 hours prior.

Both Chhapaak and Tanhaji: The Unsung Warrior opened on January 10. And Tanhaji: The Unsung Warrior was a clear winner from Day 1. The film was a great entertainer with an unbelievable climax that made people clap and whistle. Most importantly, it was a mainstream film. Chhapaak, on the other hand, was a niche flick and a story of an acid attack survivor. It was not the conventional entertainer. As a result, the film opened on a not-so-great-note. Sadly, even reports were mixed. A lot of viewers complained that it was a missed opportunity as the film had lot of potential. This reflected in its collections. Usually, such films have a poor opening but then have a huge jump in earnings. This has been seen with films like Pink, Article 15, Andhadhun etc. But Chhapaak never got that spike in earnings. As expected, the geniuses behind #BoycottChhapaak began to take credit. They felt it’s because of them that Chhapaak has flopped.

So did Deepika Padukone’s JNU visit and the subsequent smear campaign really dent the film? The answer is a BIG NO! And it’s easy to explain why. Take a look at all those who are vehemently against Chhapaak due to the JNU episode. These people were never the target audience of the film. These people would have never ventured out to see Chhapaak, even if Deepika Paudkone had made no such visit to the said university. The film was targeted at the elite multiplex crowd. Most of them are sympathetic to the manner in which the students were assaulted and injured. Again, these are the ones who were interested to see the film as they are usually accepting of such disturbing and niche subjects. Hence, the intention probably was to get into their good books.

In the past, these BJP fanatics have targeted films like Dangal and Veere Di Wedding. Both were huge hits. Even Padmaavat was a film that had enraged some of these trolls due to the controversies over its content. It didn’t release in as many as 4 states. Yet, it crossed more than Rs. 270 crore net at the India box office. Hence, it has been proved time and again that boycott campaigns have zero impact on films. The reason Chhapaak didn’t work is because the content didn’t click with the target audience.

As one can see, the collections are more or less in the same range. October earned around Rs. 25.37 crore approx in Week 1. Chhapaak too would end up earning the same as it’ll get advantage of minor holidays today and tomorrow. But the main point is – even October had similar mixed word of mouth like Chhapaak. Despite having a star like Varun Dhawan, the collections didn’t go beyond a point and this usually happens with such niche films with not-so-great reports. And mind you, Varun never visited JNU!

Also, can all those promising to boycott Chhapaak can assure that they’ll similarly boycott Deepika Padukone’s next, ’83 as well? For those who don’t know, this sports film is based on India’s stunning victory in the 1983 Cricket World Cup. Ranveer Singh essays Kapil Dev while Deepika plays his wife. Just like Chhapaak, it’s also produced by the actress. It’ll release on Good Friday Holiday, on April 10, 2020, and is expected to be the biggest blockbuster of Hindi cinema, dethroning Dangal from number 1 position. The hype it’ll create will be historic as it’s a film that’ll attract audiences of all age groups and all kinds. And this also includes the BJP fanatics. They won’t be able to help but not see ’83! As a result, this #BoycottChhapaak movement was nothing more than a nuisance and made no impact to the film whatsoever.

Lastly, it also raises another question – if Deepika Padukone’s JNU visit didn’t dent the film, then did it help Chhapaak in any way? Again, the answer is a No. There’s no doubt that it was a publicity stunt by the makers. Possibly, it was done because they realized that the product is not upto the mark and were hoping that this campaign gives them the much needed boost. Well, it did grab eyeballs but didn’t translate into healthy box office numbers.

In the process, however, Deepika ended up taking a huge risk. In order to promote her film, she took a step that can have huge repercussions in a country like ours. Her image of standing with folded hands in front of Aishe Ghosh would forever haunt her and might be taken up in future by vested interests to further their evil agenda. Obviously, she must be having the urge to support the students and that’s what made her go there. After all, there are other, non-controversial and headline-grabbing methods of promotion as well. One just wishes it was not done under the guise of film promotion as that took away some impact. Nevertheless, here’s hoping Deepika Padukone’s brave decision motivates other Bollywood actors, who also want to do something similar but don’t do it out of fear.