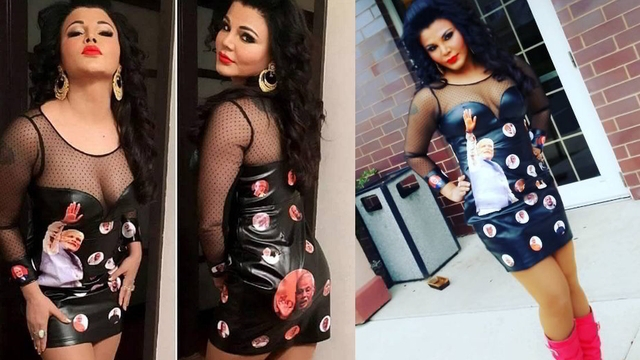 Controversy’s favourite child Rakhi Sawant was once again in a soup when she wore a black leather dress that had Prime Minister Narendra Modi’s mug all over her. Rakhi is surprised with the brouhaha and says that she doesn’t understand this world! She claims that she was one of the first celebrities to have endorsed Narendra Modi by shouting his name from the rooftops and criticize Rahul Gandhi.

The topic then veers towards her upcoming film, Ek Kahani Julie Ki. Rakhi in this film plays a character inspired by Indrani Mukerjea – the movie is based on the shocking Sheena Bora murder case. Rakhi claims to have known all 3 – Indrani, husband Peter Mukerjea and daughter Sheena – since she did a TV show for their television channel. She maintains that Indrani didn’t kill Sheena – it’s Peter who is responsible – no mother would do that to her daughter is what she says. She also reveals that Indrani and Sheena used to call each other ‘didi’.

Rakhi is happy that she got to do romantic songs in the film for the first time ever and not just item songs, for a change. She has a small regret that the producer had to change the script a bit after getting threat calls. Hence, 40% of the script has been tweaked. But Rakhi assures that the film will still make an impact.

Rakhi also breaks silence on Elesh Parujanwala, with whom she got engaged after selecting him on the reality show Rakhi Ka Swayamvar. She makes it clear that she did the show because she wanted to buy a flat and it was all done after getting into an arrangement with the production house. She then says that she has a boyfriend in Los Angeles but has no intentions of getting married. After all, who would want to marry a freak like her is what she remarks!

She has no qualms in admitting that she did go under the knife to enhance her breasts. She adds that if she can fill 3 trucks if she starts collecting the plastic that has gone in the bodies of our Bollywood celebrities!

Love her or hate her but you can’t help but not get engaged when reading Rakhi’s interview!