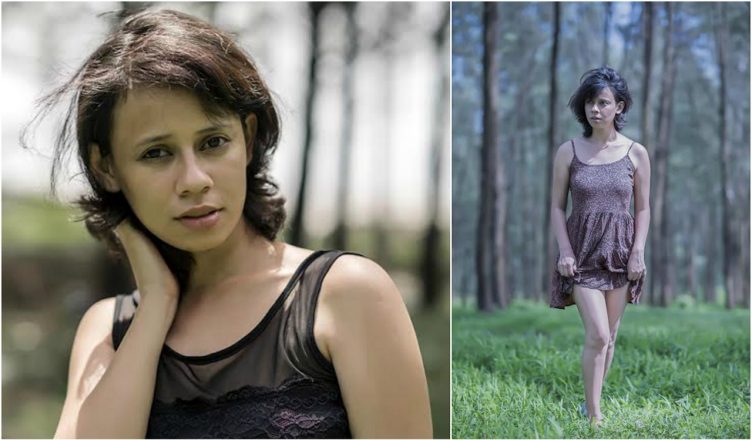 Trimala Adhikari – the name might not sound a bell but viewers will surely remember her as the wife of Nawazuddin Siddiqui in Haraamkhor. In the midst of Nawaz, Shweta Tripathi and the two kids, she left a huge impact in this small-budget, high concept flick. Not much is known about her and her struggles and hence, it was an exciting and curious experience to interview her. As we sat in a coffee shop in Lokhandwala, Trimala, who had then just came from the rehearsal of Nitin Bharadwaj’s play Ek Rupaiya that will be staged at NCPA’s Experimental Theatre on May 7, talks about experience of doing Haraamkhor, her beginnings, theatre background, nepotism, her favourites in cinema and a lot more. Over to this beautiful and opinionated actress…

What kind of feedback did you receive for Haraamkhor? Most of the critics said very good things about you…
Yes and I got a lot of appreciation. The feedback was good and I am happy with the response.

The film took a long time to be made and then when it was ready, it was stuck for close to a year thanks to the Censors. Did that frustrate you?
Well, sometimes you are not aware of what exactly is happening. As in, once you finish your work as an actor, it’s difficult to understand the process later on and how much time it takes. But I’d say that the wait was worth it!

Director Shlok Sharma revealed that the film was shot in just 16 days in more or less the same location. How was the experience?
This was not my first film which was shot in such a short period of time. I did a film called Hansa, directed by Manav Kaul, which was also filmed in just 2 weeks. Hence, the Haraamkhor experience wasn’t new in that regard. Also, I shot only for 5-6 days. It was fun and moreover, I have never worked in a commercial film whose shoot goes on more for months. Films like Haraamkhor and Hansa on the other hand finish on time and are shot in just one go. There’s no long break which can be quite detrimental as it’s difficult to get back in the zone when you resume the shoot after a gap. In case of start-to-finish shoots, at least you are in the rhythm.

How was the experience shooting with your on-screen hubby Nawazuddin Siddiqui? You share some very interesting scenes with him…
I was quite nervous since he’s such a great performer. But he made me really comfortable. He was ready to rehearse with me. He gives you as much time as you want. Acting after all is give and take. If I don’t give in properly, he also would not be able to react that well and vice versa. Also, he’s such a fun person to work with and he’s quite chilled out. He used to have food with us and talk to us. He used to share about his experiences during his struggling phase. He understands what I am going through and when you come across a person who has experienced all that and is doing so well today, it’s very motivating. He also pushes you to give your best and to not give up.

How was the experience of working with Shweta Tripathi? Were you in awe of the fact that she’s playing a character which is half of her real age?
Yes, of course I was. We in a way knew each other since we both do theatre. It was a good, fun experience working with her as well because when I shot for Haraamkhor, I was really new to Mumbai. But she made me comfortable.

Where are you from and how did you get into acting?
I am from Nainital where I did my schooling. I did my graduation from Delhi University (DU). My sister is from FTII (Film and Television Institute of India). She called me to shoot for a film when I was in my first year of college. That’s when the acting bug hit me. I always wanted to be a dancer – I am trained in Kathak. After my graduation, I came to Mumbai and I started working in plays. I did backstage and production too.

Tell us something about your struggling period? Were there moments where you really got frustrated?
When I came to Mumbai, I did my first play with Manav Kaul called Mamtaz Bhai Patang Waale. Soon, he signed me for his film Hansa as well. While filming for Hansa, I got the best supporting actor award from META (Mahindra Excellence in Theatre Awards). Once I was back from Hansa’s shoot, I was offered Haraamkhor. Life was going so well – after all, I was awarded for my play, I got 2 good films and I was working with such fine directors. Suddenly after Haraamkhor, I stopped getting films though I was constantly doing theatre. This taught me that you have to keep working. You can’t be asking that when will I get work. To survive in Mumbai, I have to push myself work hard. When I’ll get a film offer is something that’s not in my hand. If I keep thinking negatively, I’ll go into a shell. And this happened to me when both Hansa and Haraamkhor took a while to release. But I realized I shouldn’t be thinking that way.

How has been the experience of working with Manav Kaul?
I call him ‘dada’. I owe him a lot since I got to knew so many people thanks to him. One of the reasons why Haraamkhor was offered to me was because I did Hansa and the plays with Manav. So he’s like a big brother who has really helped me and pushed me to act. Watching films and then saying I am an actor doesn’t make you an actor! The discipline and the hard work required to be an actor is something I learnt from him.

Did Hansa get a release?
Yes, it got a release under the PVR Director’s Rare initiative. Interestingly, we ourselves put up the posters of Hansa at night across Mumbai. It was quite fun! It was a small film and for it to get a release was a high for everyone in the team. It was a team of theatre people coming together to make a movie. Even Kumud Mishra was a part of it.

A lot is being spoken about nepotism nowadays especially after the Karan Johar-Kangana Ranaut row. As someone who didn’t have any connection with the industry, what are your views on this topic?
I think it’s okay and I don’t understand why people make a big thing about it. I agree why Kangana said so – she has also come a long way and so has someone like Alia Bhatt who’s also had her own journey. You can’t compare them. We should just keep working hard and we should always remember why we are here. For instance, we are nobody to pass judgements about a Tiger Shroff and whether he deserves to be in the industry. He’s here because people like him and he’s having a blast. If Karan Johar wants to cast me, he will cast me and if he doesn’t want to, he won’t. Also, we shouldn’t judge him for the kind of films he makes. After all, even he has to make money and survive. Hence, I don’t like to question somebody’s comfort zone.

Haraamkhor and even the short films that you have done like Hoop Diaries, Agli Baar etc were in the so-called ‘art films’ space. So do you do such films because you like such kind of movies?
No, I do these films because I get such kinds of films (laughs)!

But tomorrow, if you are offered a so-called typical Hindi masala film, would you do it? After all, you are trained dancer too…
Of course, I’d love to do it. If I like the script, I’ll do it. I don’t fear that a section of people would judge me. If a script requires a song and dance number and if the director wants it, it has to be there. Ask any actor who’s struggling or a part of indie cinema if they’ll like to do a commercial film and their answer definitely will be a ‘Yes’. I don’t understand when people say that they are more of an ‘indie actor’. But I am just an actor and there’s no division in my mind as such.

What upcoming projects are you a part of?
I finished shooting for Devashish Makhija’s Ajji. It’ll be releasing this year after doing the festival tour. Then I have done a film called Bhasmasur. It’s a small-budget but exciting project made my college passouts. I have a small part in the film as an actor but I did a lot of production, art direction, casting and workshop with them. Hence it’s very close to my heart and I am waiting for it to go to the film festivals. The film was shot in May 2015 in Rajasthan. This is partly a crowdfunded film and it will be great if people can support this film by logging onto Wishberry.

Tell us something about your FTII film Afternoon Clouds. It’s the first FTII film to have been selected for the Cannes Film Festival…
Yeah, I was really happy when that happened. And the best part is that it’s just not a screening at Cannes. It is a part of the Cinéfondation section which is a competition section. Our film will be showcased alongside some brilliant flicks from all around the world. So it’s not like we have paid to get a screening. With no support, this film has managed to get selected which is quite brilliant. I have got an invitation and I might go to Cannes.

Do you have a wish list of directors you want to work with?
I really want to work with Christopher Nolan, which is kind of out of my reach. But I just don’t want to act on his film. I want to be there and see how he actually writes his script, what is his thought process, how does he function. If I get an invisibility cloak, I’ll definitely go to his house! Then I like the work of David Fincher and few others. In Bollywood, I’d really like to work with Devashish Makhija again. I love the way he makes cinema and hence he’s one of my favourite directors. I’d also love to work with Zoya Akhtar – the way she balances commercial as well meaningful cinema is praiseworthy. Dibakar Banerjee is also a favourite. I loved his film Shanghai and I wonder why people didn’t like it.

And who are your favourite actors?
One of my favourite actors, just like everyone, is Marlon Brando. I also like the work of Daniel Day Lewis – wish I was like him. Tom Hardy is also a favourite. In Bollywood, Adil Hussain and Geetanjali Kulkarni are two actors whose work I really love. I have worked with Geetanjali and the way she acts is just amazing. I’d love to work with Pankaj Tripathi. For me, he was the scene-stealer in Masaan.

Which of the films have impressed you over the years?
My all-time favourite is The Godfather followed by My Left Foot, Life Is Beautiful, Amélie etc. I also love Korean films basically like I Saw The Devil. In Hindi, I enjoy Jaane Bhi Do Yaaro, Lakshya, Dil Chahta Hai, Pyaasa, Teesri Manzil, Chalti Ka Naam Gaadi etc. In recent times, I loved Court, Killa. Dangal I felt was a good fun flick.