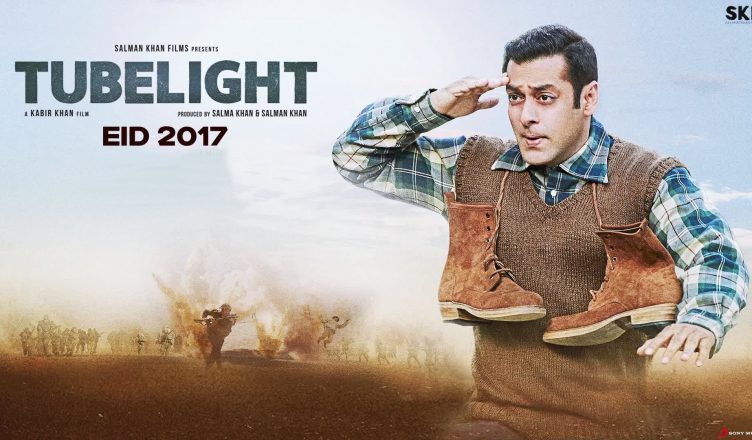 “Hope can move mountains” is a popular and an old adage. But is this really possible? Kabir Khan and Salman Khan‘s latest offing Tubelight confirms that it is indeed a realistic saying. The film is slightly different from the usual Salman Khan entertainers and that is its big plus as well as minus point.

The story of the movie: The year is 1962. India-China War has begun and the Indian Army is in need of soldiers. The Army makes an appeal to the villagers of Jagatpur, situated near the border, to get enrolled and fight with the forces. Bharat Singh Bisht (Sohail Khan) gets selected. His brother, Laxman Singh Bisht (Salman Khan) is a simpleton, good-hearted person who has a great bonding with Bharat. But when Bharat has to go away to fight in the war, he is saddened. However, the worse is yet to come for Laxman.

Tubelight has a lovely beginning. Despite being an unconventional film,  Salman’s entry is dramatic and whistle worthy. There are no complaints in the first 30-40 minutes. After a point, shockingly the interest and entertainment level drop sadly. From here on till the end, the film works but only at places. At one juncture, there are two back to back songs, which are unnecessary. The film drags at places in pre-climax but thankfully, the climax is very moving and makes for a great watch. Shah Rukh Khan has a crucial special appearance and is terrific.

Performances are excellent. Salman Khan gives a highly adorable performance. He works hard to do something drastically different and he succeeds. Sohail Khan is absolutely natural and impresses in a supporting role. Zhu Zhu looks charming and is subtle. Matin Rey Tangu does very well. His chemistry with Salman however isn’t exciting. Late Om Puri, Mohd Zeeshan Ayyub and Yashpal Sharma are fine.

Pritam‘s music is not memorable enough. Radio is the best followed by Naach Meri Jaan. Tinka Tinka Dil Mera and Main Agar don’t leave a mark. Julius Packiam‘s background score is exhilarating. Aseem Mishra‘s cinematography is breathtaking. Glenn Boswell and Aamar Shetty‘s action is realistic. Rajnish Hedao‘s production design is superb. The whole town looks great and authentic. The film’s story is taken from the Hollywood film Little Boy (written by Alejandro Monteverde, Pepe Portillo) and is simple and effective. Manurishi Chadha‘s dialogues could have been better. Kabir Khan and Parveez Shaikh‘s screenplay is faulty at places. At some places, scenes were added to induce laughs. But many such scenes don’t work. Kabir Khan‘s direction also doesn’t do much to salvage the situation. Some sequences are indeed very beautifully executed but the consistency is missing.

On the whole, Tubelight is a very unconventional Salman Khan entertainer, which is not everyone’s cup of tea. The film is inconsistent – few scenes are deftly executed while at places, the film is flat and even drags. Salman’s chemistry with kid actor Matin Rey Tangu is nowhere close to Salman-Harshaali Malhotra‘s chemistry in Bajrangi Bhaijaan. Despite the plusses and a great message, Tubelight is a film that’s just worth watching once!

One thought on “Movie Review: TUBELIGHT by FENIL SETA”