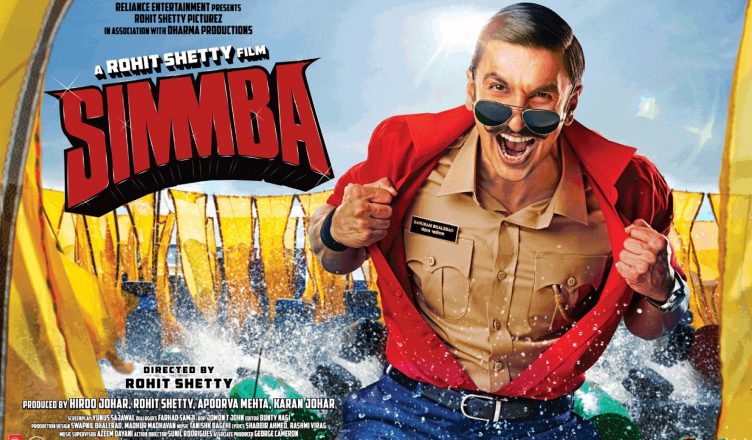 There are very few filmmakers who have a fan following of their own and can enhance the buzz simply by their association. Rohit Shetty is one such director who has become a brand thanks to his entertaining, well-made and larger than life films. After Singham, the respect for him increased manifold. And now he’s back with another cop drama, Simmba, featuring the energetic and dynamic Ranveer Singh. The stakes are high and so is the hype for the film. And thankfully, Simmba manages to entertain big time, just like the previous Rohit Shetty films!

The story of the movie: Sangram Bhalerao aka Simmba (Ranveer Singh) is a dishonest police officer in Shivgad. Minister Vinayak Dutta (Uday Tikekar) transfers him to Miramar, Goa. Once he shifts there, he meets Shagun (Sara Ali Khan) and both fall for each other. He also develops a brotherly bond with Aakruti Dave (Vaidehi Parshurami), a medical student who teaches poor kids. However, she also gets in the wrong books of Durva Ranade (Sonu Sood), which changes her life for the worse. Simmba is on the payroll of Durva and hence, he feels helpless. But he’s a brother first and realizes that for Aakurti’s sake, he’ll have to take matters in his hands.

Simmba begins with a bang and stays on a high till the last frame. Adult Simmba’s entry is terrific and the film gets better as his corrupt deeds are showcased. Some of the great scenes in the first half are reserved for Nityananda Mohile (Ashutosh Rana). Also, his romance with Shagun makes for an entertaining watch. But the soul of the first half is the entire Aakruti episode. The intermission point is like the lull before the storm and sure enough, the second half gets better. The action scenes are no doubt fabulous but even the dramatic and confrontational sequences are worth it. Also in close competition is the scene of Bajirao Singham (Ajay Devgn)! There’s also a surprise in store in the very last scene!

Ranveer Singh is the soul of the film and is absolutely entertaining. He gets to play a part where he can be his real self with some Rohit Shetty style tadka. And the result is a performance that would be remembered for years. Sara Ali Khan shows the spark yet again. Sadly and as expected, she has a limited screen time. Sonu Sood is convincing as the villain. He looks powerful and someone that one shouldn’t mess with. Parallels would be drawn with his Cheddi Singh act in Dabangg but Sonu tries his best to ensure people don’t remember that film. Also, physically he looks menacing and strong and two sequences in second half prove that.
Siddharth Jadhav (Santosh Tawde) is dependable and he has a crucial part to play in the second half. Ashutosh Rana is the surprise of the film and steals the show in various scenes. Vaidehi Parshurami is lovely and your heart goes out to her. Ashwini Kalsekar (Judge Smita Parulkar) plays the tough judge part nicely. Her dialogue in the climax is the need of the hour. Uday Tikekar, Suchitra Bandekar (Suchitra), Neha Mahajan (Kavya), Ronjini Chakraborty (Purnima), Arun Nalawade (Waman Rao), Nandu Madhav (Aakruti’s father), Vijay Patkar (Alok Borkar), Sulbha Arya (Iyer Maushi), Shriswara (Durva’s wife Varsha) and Savita Joshi (Durva’s mother Bharti Ranade) provide able support. The actors playing Sadashiv, Gaurav and lawyers are over the top but their acts work. The cameos by Arshad Warsi, Tusshar Kapoor, Shreyas Talpade and Kunal Kemmu are great. Ajay Devgn is outstanding and despite lesser screen time, he leaves a mark.

Music is nothing great but songs are well placed. ‘Aala Re Aala’ is grand and colourful while ‘Aankh Maarey’ is the best of the lot. ‘Tere Bin’ is well shot in picturesque locales. ‘Mera Wala Dance’ is shown in the end credits. Amar Mohile and Thaman S’s background score is exhilarating, enhancing impact. Don’t miss the fusion theme in the second half!

Jomon T John’s cinematography is excellent and contributes to the impact. Swapnil Bhalerao and Madhur Madhavan‘s production design is real and appealing. The pub sets are striking. Sunil Rodrigues and Rohit Shetty‘s action is a real highlight, like it happens with any Rohit Shetty film. It is not too gory and makes the film even more entertaining. NY VFXWaala‘s VFX could have been better. Bunty Nagi’s editing is slick.

Vakkantham Vamsi’s story is entertaining and very relatable. Yunus Sajawal and Sajid Samji’s screenplay is brilliant. This is a remake of the Telugu movie Temper and the writers take the essence of the original and have treated it very well. Farhad Samji’s dialogues are one of the highpoints and add to the drama and humour.

Rohit Shetty’s direction is exemplary and ensures he gives his target family audience a great time. In 159 minutes, he packs in ample doses of laughter, romance, tragedy, thrill, action and drama. Also, this time he takes up the topic of rape and women’s safety and makes an excellent comment. He does slip at few places. The second half is a bit slow while a few scenes in the Aakruti track are difficult to digest. But these are minor glitches and the master director compensates in lot other ways. In short, Rohit Shetty has come out with flying colours and this is surely one of his most accomplished works!

Some of the best scenes:
1. Simmba’s entry
2. Simmba extracts money from the jeweller
3. Simmba’s first day at the police station
4. All scenes of Simmba and Shagun
5. Simmba meets Durva
6. Aakruti gets into trouble
7. The intermission point
8. Simmba drinks with Mohile
9. Simmba and cops at Shagun’s eatery and the scene thereafter
10. The climax

On the whole, Simmba is a complete entertainer and also delivers a powerful message. Ranveer Singh‘s entertaining performance further adds to the impact. At the box office, the film gives a fitting goodbye to 2018 and is bound to be a huge grosser. Don’t miss!