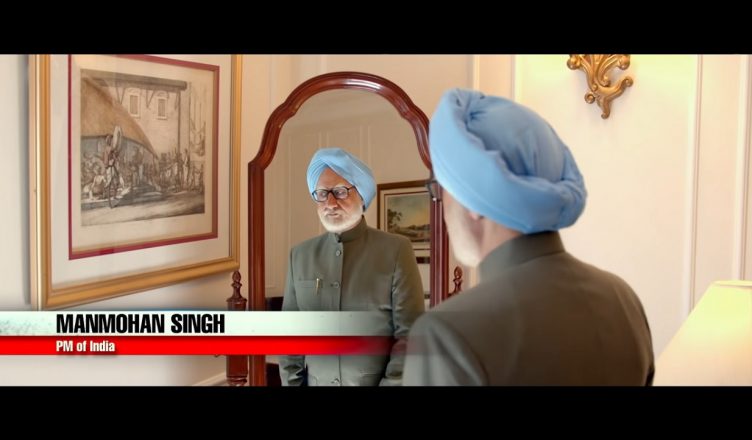 A lot of brouhaha has erupted over the trailer of The Accidental Prime Minister. It’s an upcoming Hindi film on the tenure of Dr Manmohan Singh as Prime Minister. The movie is adapted from a book by Sanjaya Baru, who was PM’s media advisor then and makes a comment that he was made to take the position then by the Gandhis till the time their ‘heir’ Rahul doesn’t become fit to become the Prime Minister. Anupam Kher plays the titular role while Akshaye Khanna steps in the shoes of Sanjaya Baru.

As soon as the trailer was out, the critics started calling it a ‘propaganda film’. They also reacted sharply to the timing of the release – 3-4 months before the crucial Lok Sabha elections 2019! Moreover, it has Anupam Kher, who has always been a BJP fan. Some even reminded that Akshaye Khanna’s deceased father Vinod Khanna was also a BJP neta. And then shockingly or rather amusingly, the official Twitter and Facebook handles of BJP shared the trailer of the film with the caption, ‘Riveting tale of how a family held the country to ransom for 10 long years. Was Dr Singh just a regent who was holding on to the PM’s chair till the time heir was ready? Watch the official trailer of #TheAccidentalPrimeMinister, based on an insider’s account, releasing on 11 Jan!’ This move made the skeptics sure that the film is backed by BJP and is using it as a tool to attack the Congress and thwart their chances in the elections.

Riveting tale of how a family held the country to ransom for 10 long years. Was Dr Singh just a regent who was holding on to the PM’s chair till the time heir was ready? Watch the official trailer of #TheAccidentalPrimeMinister, based on an insider’s account, releasing on 11 Jan! pic.twitter.com/ToliKa8xaH

Before I go further and express my views on this topic, let me make it clear that I hate all political parties. I have reached a point where I have lost in trust in all of them. Everyone is the same, more or less. Meanwhile, I enjoy watching all kinds of films and am interested and curious to watch The Accidental Prime Minister. Like most other viewers, I don’t care if the events in the film are real or fictionalized, just like I didn’t care about the same factors while watching Padmaavat and Bajirao Mastani. I want to have a good time when I see the film. Period.

All the people attacking The Accidental Prime Minister come under the so-called ‘liberal’ category. I sided with them when they raised voices against those attacking Padmaavat and Udta Punjab. In case of Padmaavat, Karni Sena had revolted against the film and even attacked director Sanjay Leela Bhansali. They claimed that the film is not a true account and I, along with other liberals, asked ‘So what?’! We reminded these protesters about freedom of expression and that all the filmmakers have the right to artistic freedom. It’s unfortunate to see that the same liberal class forgetting all these virtues and making allegations on BJP and others for endorsing The Accidental Prime Minister.

If these liberals had issues with the timing of the release of The Accidental Prime Minister, why didn’t they raise their voice when Udta Punjab released 9 months before Punjab elections 2017? Or when Firaaq released a month before Lok Sabha elections 2009? I am not saying both these very well made films were propaganda films and funded by Congress. But the timing of the release raised questions among BJP loyalists and the liberal clout had brushed it aside. And now the tables have turned with the liberals opposing the release of this Anupam Kher-starrer. How is this fair? Why can’t this upcoming film have the same benefit of doubt as Udta Punjab, Firaaq and many other films?

Also, those trying to argue by reminding that BJP fans are a part of the film conveniently forget that Hansal Mehta is the creative producer of the film. He has raised his voice plenty of times against the current BJP government. He once joked that ex FTII chariman Gajendra Chauhan should be the next Prime Minister of India! How will these liberals explain his association with this ‘BJP-propaganda film’?

That BJP endorsed the film by posting its trailer on their handles does raise eyebrows as this is a first. Also, there has been no consensus on whether the episodes in the film and book are real or fiction. The opening disclaimer in the film does state that the film is a fictionalized account. But the BJP’s caption calls it a ‘riveting tale’, as if suggesting that all that’s shown in the film is actually true. But publicly, they refuse to accept that and pretend to dodge this criticism. This is a standard BJP tactic. During incidents like lynchings, they’d try to project that they don’t support it. But then their minister would visit the funeral of the accused where a tricolour is kept on his mortal remains and communal speeches are given in the background. It is a way of indirectly sending a message to the support base that they endorse the killings of Muslims in a brutal manner. But they don’t directly say it and hence supporters can always argue otherwise. The same strategy is applied here – not directly endorse the film and yet do things like posting the trailer on Twitter and Facebook and make its stand known.

Congress thankfully has planned not to create problems and allow the film to release. As for the liberals, my only request is that they should act sensibly. While criticising BJP, don’t become a Congress supporter, especially when you don’t like the performance of the latter from 2004 to 2014. If BJP is trying to back this film, there’s nothing illegal in it. They are just using this film as a way of getting back at Congress. Tomorrow, Congress will also go all out if a film on Modi and his disastrous policies is out, just like how they gave their support to Udta Punjab. And finally, let’s not be hypocrites, accidental or otherwise, and let’s be fair!