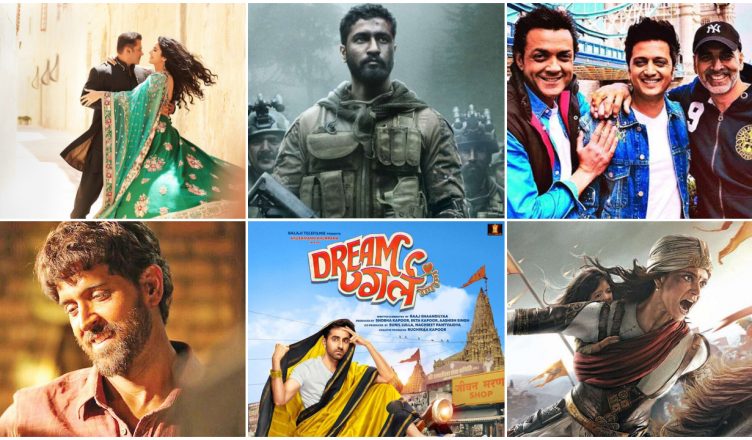 BHARAT: It’s the coming together of superstar Salman Khan and blockbuster director Ali Abbas Zafar. Both have delivered two big, massy hits in the past – Sultan and Tiger Zinda Hai. Hence, even though Bharat doesn’t seem like a typical pan-India entertainer (it’s a remake of the Korean drama An Ode To My Father), the expectations for it are skyhigh. That it showcases different eras in the post-Independence India should also be something to watch out for!

URI: It is based on the much-talked about 2016 surgical strikes by India. The incident is fresh in everyone’s minds and makes people proud. Also, Uri looks like a no-nonsense film on the lines of Hollywood films like Zero Dark Thirty and Argo and our very own Bollywood thriller Baby. Vicky Kaushal, who has achieved maximum praise in 2018, plays the lead role and that has also upped the hype.

HOUSEFULL 4: The director has been changed from Sajid Khan to Farhad Samji. Nana Patekar has been replaced by Rana Daggubati. But this hasn’t changed the excitement for this big-budget reincarnation comedy. The previous Housefull film was a disappointment but this one seems like an unusual comic caper and if made well, it can work wonders!

SUPER 30: Again, this is a film that has faced issues due to director Vikas Bahl coming under the #MeToo scanner. But again, the hype is intact as it stars superstar Hrithik Roshan and this would be his first film in more than 2 years! It is also based on an inspiring tale.

DREAM GIRL: Ayushmann Khurrana and quirky films go hand in hand. In this slice-of-life film, he would be billed as ‘Ayushmann Khurrana in an as Dream Girl’ and can be seen wearing a saree in the first look. Expect Ayushmann to impress audiences once again!

MANIKARNIKA – THE QUEEN OF JHANSI: Kangana Ranaut is a fabulous performer and there’s definitely a curiosity as to how she has essayed Rani Lakshmibai in this historical. The trailer looks great thankfully.

EK LADKI KO DEKHA TOH AISA LAGA: The excitement and awareness of this film was minimal till last week. But then came out the trailer and it surprised many. After all, Sonam Kapoor here plays a lesbian. Anil Kapoor, Juhi Chawla and Rajkummar Rao can also be seen in this flick.

GULLY BOY: Zoya Akhtar is one of the best directors of Bollywood and this time, she delves into the world of slums and rapping. Ranveer Singh and Alia Bhatt together itself would be something to watch out for!

SANDEEP AUR PINKY FARAAR: I feel Dibakar Banerjee is way ahead of Anurag Kashyap when it comes to realistic fares. He was missing from the scene since sometime but now it’s great to see him back with what seems like a fun-filled entertainer. Arjun Kapoor and Parineeti Chopra are the leading actors in this flick. It’ll be interesting to see the locales of Uttarakhand as well, which is a rarely explored location despite the proximity from Delhi.

BADLA: Those who have seen the original Spanish film The Invisible Guest would surely call it a classic and a suspense film like no other. Its remake Badla hence is keenly awaited. Thankfully, it has fallen into the right hands with Sujoy Ghosh directing it and Taapsee Pannu and Amitabh Bachchan in the leading roles.

KESARI: This film will see Akshay Kumar in the role of Havildar Ishar Singh who along with 20 other Sikhs fought an army of 10,000 in 1897. The story itself is awe-inspiring and Akshay is expected to rock the show.

STUDENT OF THE YEAR 2: Watching Tiger Shroff on screen is a treat. And Student Of The Year was a fine entertainer. The amalgamation of both can make for an entertaining watch!

INDIA’S MOST WANTED: Raj Kumar Gupta has been making some hard-hitting films and with Raid last year, he proved his worth yet again. India’s Most Wanted seems to be in the same zone as Raid and can be a surprise success.

GOOD NEWS: Akshay Kumar, Kareena Kapoor, Kiara Advani and Diljit Dosanjh collaborate for this sweet film that deals with surrogacy. The cast, premise and Dharma Productions producing it have added to the curiosity.

BATLA HOUSE: John Abraham finally got his due in 2018 and with Batla House, he has a chance to make his position strong. The film is based on a real incident and can be a gripping action thriller

MISSION MANGAL: Who doesn’t like real, inspiring stories told in an entertaining manner? Mission Mangal seems like a winner from the start itself. Besides that it’s based on the role of women during the Mangalayaan mission, the star cast is too good. Akshay Kumar is the male lead but the real stars of the film are expected to be actresses Vidya Balan, Taapsee Pannu, Sonakshi Sinha, Kirti Kulhari and Nithya Menon.

TANHAJI: Ajay Devgn is all set to be seen as a real superstar in 2019 and this film would go a long way in doing so. In this historical, he plays the brave warrior Tanaji Malusare. Besides making this historical figure famous, the film is also expected to entertain viewers big time. Saif Ali Khan, moreover, plays the negative lead.

BRAHMASTRA: Ayan Mukerji, who has earned a following with just two films, will finally have his third film this year. If his association as a director wasn’t enough, the film is a fantasy and has an envious star cast comprising of Ranbir Kapoor, Alia Bhatt, Amitabh Bachchan and Mouni Roy.

SOORYAVANSHI: Simmba ends showing Akshay Kumar as Veer Sooryavanshi and also hints that the film on this officer releases this year. Not to forget, Rohit Shetty will be directing this entertainer that is expected to talk about terrorism. Akshay and Rohit coming together is one of the best things to have happened in 2019!

HRITHIK ROSHAN-TIGER SHROFF’S NEXT: Another new jodi that can be exhilarating is new age fit star Tiger Shroff and the evergreen and strong Hrithik Roshan. Both will be seen in an action film directed by Siddharth Anand and needless to say, it’ll be something else for sure!

MADE IN CHINA: The versatile Rajkummar Rao will be seen as a Gujarati businessman embarking on a trip to China in this film which is expected to be a fun, timepass fare. Also, it stars Mouni Roy.

SAAHO: The whole nation has fallen in love with Prabhas after the Baahubali series. Hence, his next flick Saaho is eagerly awaited. It’s a trilingual film and not dubbed like Baahubali. Nothing is known about this film’s plot but from the teaser, it’s evident that it’s going to be a visual extravaganza

CHHAPAAK: Deepika Padukone. Meghna Gulzar. A film on acid survivor Laxmi Agarwal. Nothing to say more, except that bring this film fast!

SHAKEELA: The Dirty Picture was a great entertainer, based on an adult star Silk Smitha. Shakeela is based on another such actress of the same name who is also unabashed. Richa Chadha will be seen stepping into the shoes of Shakeela and if made well, it can be an impactful flick!