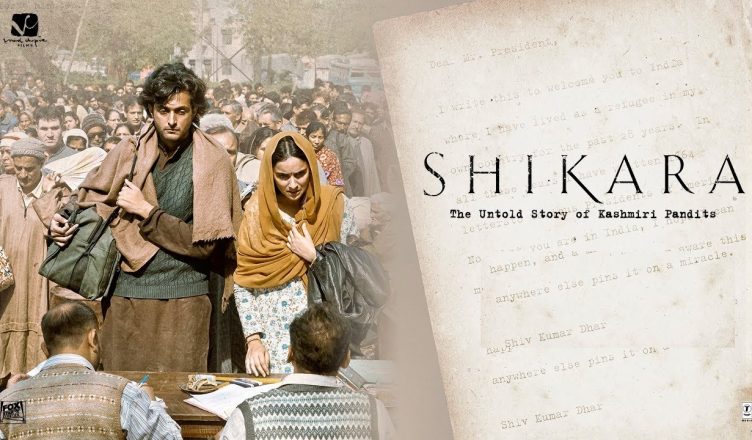 One of the most shocking episodes of Indian history is the exodus of Kashmiri Pandits. It’s been 30 years since lakhs of these people had to leave their house and in a way their world overnight and shockingly, justice has still not been done. Shockingly, there has been just one film on this topic till now which is also largely unknown, Ashoke Pandit’s Sheen. Now Vidhu Vinod Chopra takes up this issue in his directorial flick, Shikara. The trailer is promising and thankfully, the film fulfills most expectations!

The story of the movie: The year is 2018. Shiv Kumar Dhar (Aadil Khan), a resident of Muthi Refugee Camp, Jammu, is writing a letter to the USA President to explain about the wrongdoings done to him and his Kashmiri Pandit community. He has already written thousands of such letters to various USA presidents over the years and despite not getting a response, he still pens a letter every week. One day, he’s pleasantly surprised to know that the President replies to him and invites him to Agra where he’s on a visit. What’s more, he even books the Presidential Suite for him. Shiv takes his wife Shanti Dhar (Sadia) to Agra. At this point, they revisit their old memories. In 1987, they had met for the first time in Srinagar. Both fall in love, thanks to help from Shiv’s friend Lateef Lone (Zain Khan Durrani). They get married and build a house on a piece of land that has an apple orchard. The house is named Shikara. All is going well but trouble starts in 1988-89. Lateef’s politician father is killed. Kashmiri Pandits start getting hints that they should leave and go to ‘India’. Shiv is scared but the Muslim neighbours assure them that all is well and they’ll not let anything happen. On January 19, 1990, the houses of Pandits get attacked. With no other choice, Shiv and his family are compelled to leave and head to Jammu.

Shikara begins on a heartwarming note. The manner in which Shiv and Shanti marvel at the five-star property is heartening. The initial flashback portions work well. Shiv and Shanti’s romance blooms quite fast but it’s convincing. The equation of Shiv with Naveen (Priyanshu Chatterjee) and that of Shiv and Lateef is well depicted. Also, trouble brewing in the Valley is gradual but makes an impact. The scenes 15 minutes before intermission are quite strong. The interval point packs a punch. Post-interval, the film grips as Shiv and his family reach the Refugee camp and madness erupts there over food and other necessities. From here on, the film is engaging but also slips a bit. The finale is unexpected and the film ends on a poignant note. But one wishes the makers had shown more of what the Kashmiri Pandits had to suffer over the years and their process of fighting back.

Shikara marks the debut of two excellent actors. Aadil Khan looks a bit like Ranbir Kapoor but his performance is original. He handles the difficult role with maturity. Even in the older looking portions, he’s first-rate. Sadia too delivers a splendid performance. Her screen presence is too good. She, too, does well in scenes where she’s old but she doesn’t look aged. Her performance however saves the day. Zain Khan Durrani is apt and provides great support. Priyanshu Chatterjee is lovely. Bhavna Chauhan (Aarti Kachru), Farid Azad Khan (Rehmana) and Saghar Sehrai (Haji Saab) are decent. Lastly, real Kashmiri Pandits have acted as refugees.

There are very few songs in the film. ‘Mar Jaayein Hum’ by Sandesh Shandilya is soulful and both the versions are well written and composed. A R Rahman and Qutub-E-Kripa‘s background score gives the film a nice, classy touch.

Rangarajan Ramabadran‘s cinematography is stunning. Earlier, the DOP of Notebook had also done a great job but Rangarajan goes one step ahead. The birds-eye-view shots capture Srinagar like never before. Sonal Sawant‘s production design is realistic and well-researched. Same goes for Bishwadeep Chatterjee and Abhijit Roy‘s costumes. Vikram Gaikwad‘s make-up is good for Aadil Khan but leaves a lot to be desired in case of Sadia. Red Chillies.VFX‘s VFX is topnotch. The way the words from Shiv’s letters are displayed on screen in first scene is seen to be believed. Vidhu Vinod Chopra‘s editing is well-paced.

Vidhu Vinod Chopra‘s direction is superlative. One can see that he has painstakingly worked hard on each and every shot. The first half is like poetry in motion. He has a special connection with the community and beautifully showcases their customs, way of life, clothing and accessories (don’t miss the long earrings worn by Shanti) and especially the marriage ceremony. The first half is simple and each and every aspect is explained in a simple manner. Shockingly, in the second half, a lot of questions are left unanswered. Those who might not know much about this chapter would feel bewildered to know why the Kashmiri Pandits couldn’t go back all these years? Also, no proper explanation given as to who killed Lateef’s father. Shiv seem well-settled financially and trouble started around 2 years after his marriage. Yet, why didn’t he take Shanti to Agra for honeymoon is difficult to digest. Lastly, the developments in the finale will also give rise to ‘how did this happen’ question in the minds of many viewers.

On the whole, Shikara is a moving tale of the exodus of Kashmiri Pandits. Vidhu Vinod Chopra has tried his best to depict the pain and sufferings of the community after their displacement from the Valley 30 years back and serves a reminder yet again that justice still hasn’t been done to them. Performances are exemplary while each and every shot is beautiful and amazes viewers. The film might not get its due in theatres but here’s hoping it at least reaches people through OTT.