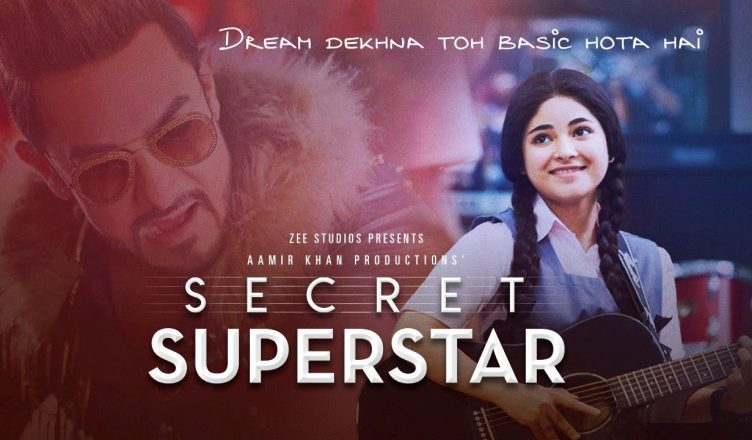 Post Nirbhaya incident, a lot of awareness has been spread about women rights. Yet, there are countless women who continue to get exploited. Secret Superstar comes at a great time as it makes a comment on a lot of topics without getting heavy or depressing. Easily it’s one of the finest films in recent times!

The story of the movie: Insiya (Zaira Wasim) is a 15 year old girl in Baroda who lives with her parents, mother Najma (Meher Vij), father Farookh (Raj Arjun), brother Guddu (Kabir Sajid) and grandmother (Farrukh Jaffer). She dreams of being the world’s best singer but it’s not going to be easy for her. Farookh is extremely strict and conservative and is strictly against Insiya’s dreams. However, her desire to make people hear her voice is too strong. She decides to put her songs on YouTube. But she hides her face by wearing a burkha. In no time, her songs go viral and she becomes an internet sensation. Even the notorious, brash music director Shakti Kumaarr (Aamir Khan) gets impressed by her singing skills.

Secret Superstar has a simple beginning but it works as the characters and their dynamics with each other get established very well. The film of course gets better when Insiya turns into a secret superstar. The goings on are lovely and suddenly, the mood changes in the pre intermission scene. It’s chilling! Post interval, the interest levels don’t drop even for a moment even though few sequences might seem a bit convenient. But the plusses outweigh the minuses big time. The manner in which Insiya develops a bond with Shakti and even her association with Chintan (Tirth Sharma) is lovely and sure to be talked about. But what takes the cake is Insiya’s love for her mother and vice versa. It’s terrific and is sure to make viewers smile and also move them to tears! The best is reserved for the last 20 minutes when the film goes on another level! It’s exhilarating and without doubt, the best part of the film!

Talking of performances, Zaira Wasim delivers one of the finest performances in a long time! She was great in Dangal but in Secret Superstar, she is extraordinary! It’s a feat to perform myriad of emotions so well and that too at a tender age of 15 and 16! Zaira is sure to win hearts and here’s hoping she gets another National Award! Aamir Khan has a supporting role but elevates the impact with his brashness and humour! But not even for a moment does his act turn repulsive. A nice balance is maintained! Hats off! Meher Vij, who also played Munni’s mother in Bajrangi Bhaijaan, is a very important part of the film and she is outstanding to say the least! You cry when she sheds tears and you smile when she is ready to go to any lengths for her daughter. Here’s hoping she gets lots and lots of well-written roles in future! Raj Arjun plays his evil act wonderfully. He gets totally into the skin of his character. Tirth Sharma at first doesn’t seem apt for his character but later on, he proves his worth! His scenes are amazing and the teenage romance part is handled very well! Kabir Sajid is cute while Farrukh Jaffer doesn’t have much to do initially but later on, she adds a lot to the story. The actor playing the lawyer looks quite convincing.

Amit Trivedi’s music is not the chartbuster type but it works well in the film. Main Kaun Hoon and Nachdi Phira are the best songs of the lot – well sung, written and shot! Meri Pyaari Ammi is touching while Sapne Re, played in the beginning, sets the mood of the film. I’ll Miss You could have been done away with it but nevertheless, it makes for a cute watch. Background score is in sync with the film’s mood and quite exhilarating in the end. Anil Mehta’s cinematography is brilliant as always. Advait Chandan’s story is very well written. His screenplay is simple and effective. His dialogues are straight out of life and the ones mouthed by Aamir are hilarious! Advait Chandan’s direction is not hurried – the film moves at its own pace but it’s quite engaging, despite the 150 minutes duration. Sadly, he leaves a few questions unanswered. This might leave the viewers a bit confused about certain things. Also, as said before, few sequences are a bit unconvincing. Nevertheless, he shines in a few scenes and is bound to arouse emotions. A director to watch out for!

Some of the best scenes:
1. Insiya gets a laptop and the fun begins
2. Insiya records her first song
3. Insiya reads the papers
4. Farookh’s entry
5. Farookh finds about the necklace and what happens thereafter
6. Insiya and Chintan make the ‘great escape’ plan (brilliant!)
7. All scenes of Shakti Kumaarr
8. The airport sequence (outstanding!)
9. The climax

On the whole, Secret Superstar is a brilliant tale that should not be missed at any cost! The film thoroughly entertains and is laced with some great songs. But at the same time the makers make a great comment on a lot of issues plaguing the society today and the manner in which it’s handled is praiseworthy. Despite competition from Golmaal Again, Secret Superstar is going to find it’s way and emerge as a commercial success. Go for it!