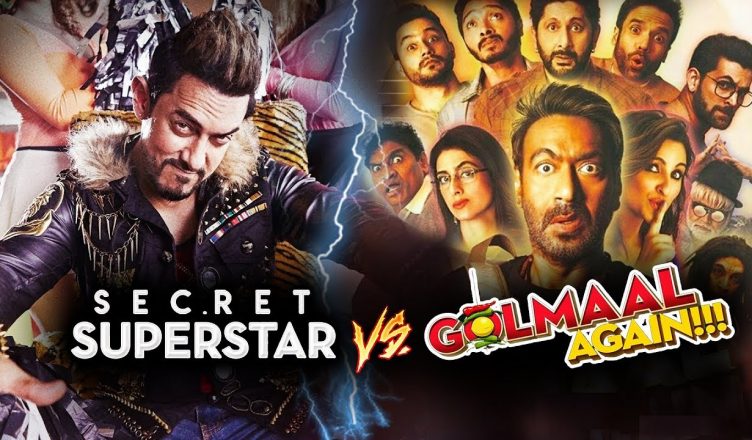 WILL THIS DIWALI BE A ROCKING ONE?

Diwali is here and just like every year, it’s a hot period to release film(s). And this time, not just one but two films are going to release and both have huge chance of earning big moolah at the box office. My views:

GOLMAAL AGAIN: It’s the fourth part of the successful Golmaal franchise and stars the usual suspects – Ajay Devgn, Arshad Warsi, Tusshar Kapoor, Kunal Kemmu and Shreyas Talpade. And this time there’s also Parineeti Chopra, Tabu, Neil Nitin Mukesh and Prakash Raj in the cast. Golmaal Again is not just a comic caper, it’s a horror comedy, and from the trailers, it looks hilarious. Also, the horror element gives a nice touch to the film. At the box office, it’s expected to take a huge opening in the Rs 25-30 crore range and it might even go beyond that. It’s a big advantage is that it’s releasing on the post-Diwali holiday as that can help the film get an opening day record. On Diwali day, that’s not possible as people tend to be busy with puja and hence occupancy is not huge for most part of the day. Golmaal Again hence will have a huge Friday and probably a bigger Saturday and Sunday as well. But if content is not great, it can fall from Monday and that would prove detrimental since the film’s costs are skyhigh.

SECRET SUPERSTAR: It’s produced by Aamir Khan and features him in a supporting role. Zaira Wasim, who played the young Geeta in Dangal, is the lead. The story is very interesting and relatable and despite being not a very commercial film, Secret Superstar has managed to be talked about. This is mainly due to Aamir backing the project and it’s promotional strategy. In fact, shockingly, Aamir is trying to get as many screens as Golmaal Again which has shocked the trade as it’s not that commercial a film. But the film is carrying excellent reports and Aamir looks very confident. Box office wise, such films don’t do more than 70-80 crore business but there’s a possibility it can go beyond that and it also has a small chance of doing 100 crore business!