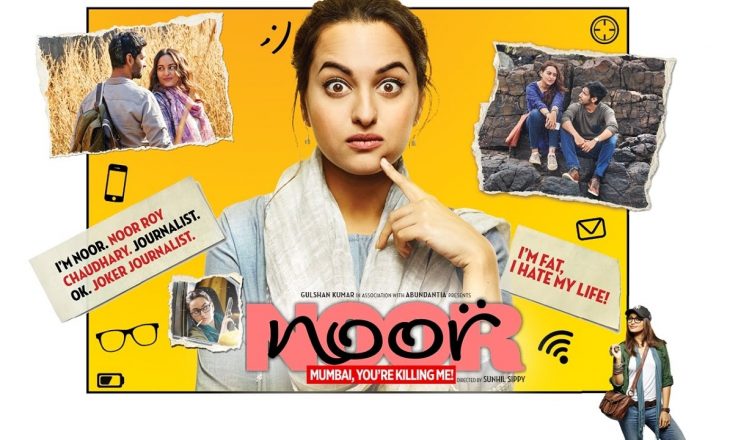 Sonakshi Sinha is a fine actress but often gets ridiculed for choosing roles that are not very significant to the film’s principle plot. But last year, the perception changed a bit with Akira. And with Noor, the performer is again trying her luck with a film centered totally on her. And as expected, her performance is great but the same can’t be said about the film.

The story: Noor Roy Chaudhary (Sonakshi Sinha) works in a news agency where she’s compelled to do inconsequential stories. She’s interested in doing stories on real issues and despite submitting several such stories to her boss Shekhar Das (Manish Chaudhari), the latter doesn’t even feel the need to look at those files. However, her life goes for a toss when she comes across a shocking incident. When Noor attempts to bring the story in front of the people, things don’t go as planned.

Noor begins on a very average note. The protagonist is well off financially, is able to afford drinks in a place like Social even when she’s facing money issues, she goes to work in a car and has a very supportive father and friends. Yet, she’s always cribbing. Agreed that when there’s no job satisfaction, life sucks. But Noor overdoes it and that isn’t convincing. Thankfully, the film is fast-paced and there’s a lot happening. Things get better when Ayan Banerjee (Purab Kohli) enters the narrative. Noor really makes an impact when she stumbles upon a shocking scam. The way it’s unveiled makes for an excellent watch. The twist before the intermission point is predictable but still leaves a mark. Post-interval, the film slows down a bit but the UK episode is sweet. The film falls when Noor returns to Mumbai. This whole bit is very unrealistic. Suddenly she put the blame of the entire fiasco on Mumbai. The finale is also convenient especially since the people Noor takes panga with are supposed to be highly dangerous. The end credit scene thankfully helps the film end on a slightly better note.

Noor belongs to Sonakshi Sinha. The film might not impress but Sonakshi will surely be loved. The actress beautifully carries the film on her firm shoulders. Noor is a complex character and though the makers and writers have made it slightly unconvincing, Sonakshi comes out with flying colours. Yet another brilliant performance from this great performer! Kanan Gill (Saad) is highly impressive. The ease with which he performs makes him highly adorable. He is more or less playing himself and it will be interesting to see if he can handle something different and hatke in his next films! Purab Kohli leaves a huge mark in a supporting role. And yes, as Noor points out in a scene, he does look hot! Smita Tambe (Malti) is damn good and plays a very crucial character in the film. M K Raina (Noor’s father) and Shibani Dandekar (Zaara) are decent. Manish Chaudhari as always rocks the show. His character however is a bit bewildering. Also, the entire track of the Kapadia Trust is hard to decipher. Sunny Leone is okay in the cameo.

Amaal Mallik’s music is nothing great. The only song that stays in one’s mind is Gulabi Aankhen and that too because it’s a badly remixed. Naren Chandavarkar and Benedict Taylor’s background is good. Keiko Nakahara’s cinematography is quite nice and captures the locales and the different moods of the city beautifully. Mansi Dhruv Mehta’s production design is appealing as well as realistic. Noor is based on Saba Imtiaz’s novel Karachi You’re Killing Me. The idea is quite promising but Althea Delmas-Kaushal, Shikhaa Sharma and Sunhil Sippy‘s screenplay doesn’t do proper justice to it. Few things are quite strange – why does Noor have to rely on Malti to get her geyser fixed? Why can’t she herself call the electrician and do the needful? Ishita Moitra Udhwani’s dialogues are simple and sharp. Sunhil Sippy’s direction however is fair.

On the whole, Noor is an average fare despite a great idea and some great performances. It is very unconvincing – right from Noor’s ‘I hate my life’ attitude to the way she bounces back. Few scenes however leave a mark but that’s not enough. At the box office, Noor sadly will turn out to be Sonakshi Sinha’s lowest grosser.