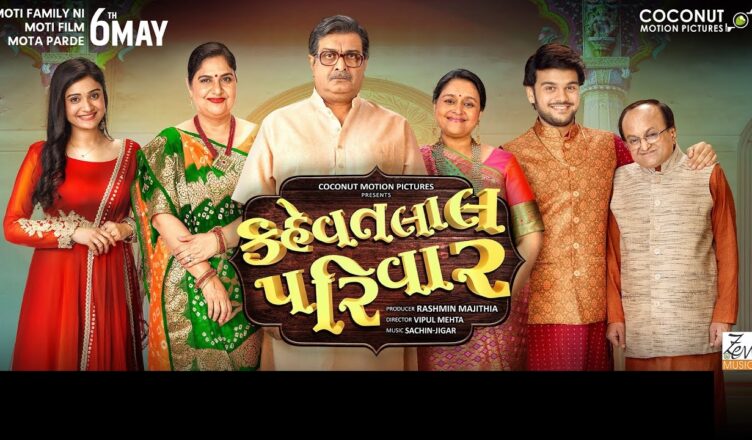 The Gujarati cinema has taken giant strides after the release of Kevi Rite Jaish (2012). The industry got a boost with the super-success of Chaal Jeevi Laiye (2019), which completed 1000 days in cinemas and is still running in theatres. And now, the team of Chaal Jeevi Laiye – producer Rashmin Rashmin Majithia of Coconut Motion Pictures, director Vipul Mehta, music director duo Sachin-Jigar and superstar Siddharth Randeria – are back with another fun-filled entertainer, Kehvatlal Parivar. The trailer promised loads of fun and laughter and thankfully, the film meets all the expectations.

The story of the movie: Rajubhai Thakar (Siddharth Randeria) resides in Ahmedabad with his sister Bhadra (Vandana Pathak), son Himesh (Bhavya Gandhi) and daughter Heta (Shraddha Dangar). He runs a streetside stall wherein he sells dhokla. His rival and competitor is none other than his brother, Shamlu (Sanjay Goradia), with whom he has had strained relations. Rajubhai is a strict, old-school person and gets ridiculed by his children and Bhadra for his outdated way of thinking. Shamlu also leaves no chance to taunt him. Rajubhai, however, refuses to change and during his me-time, he remembers his wife Kalindi (Supriya Pathak Kapur). It is believed that she passed away 23 years ago. On her 23rd death anniversary, Rajubhai and his family decide to do a pooja in her memory. Shockingly, the Thakars get an unexpected guest – Kalindi! Himesh and Heta are shocked as they have been told since they were young that their mother is no more. They now realize that Rajubhai was aware that she didn’t die and yet, he lied to them. Rajubhai is in a tight spot. Meanwhile, his shock is further compounded when he learns that Kalindi, who had migrated to the USA, also has a son – Sam (Neel Gadgani).

Kehvatlal Parivar begins on a beautiful and entertaining note, depicting the life of the Thakars and how Rajubhai’s life has been made hell by his near and dear ones. The scene where he speaks to Kalindi’s photograph in his room is a poignant sequence. However, the fun begins in the film once Kalindi arrives and viewers learn that she never died. How it leads to madness makes for a great watch. A few scenes stand out here like Rajubhai reluctantly agreeing to accompany the family on Ahmedabad’s tour. In fact, the ‘Vahurani’ song is the most memorable part of the first half. The intermission point is dramatic. Post-interval, the fun continues. The film does get a bit emotional. However, it never gets too serious. While that’s a plus point, the absence of a strong conflict, especially with a storyline like this, might also be a bit disappointing. The finale is sweet.

Speaking of performances, Siddharth Randeria is excellent as expected. He’s known for his comic timing and also for his funny reactions when the characters around him give him pain. Siddharth delivers a fine performance as he plays with his strength. However, he shines beautifully in the emotional scenes as well. Supriya Pathak Kapur puts up a very entertaining act. Her aura and screen presence contributes a lot to the film. Her chemistry with Siddharth Randeria is adorable. Bhavya Gandhi gives a confident and fine performance. He also is a known actor and hence, his presence too ups the star quotient. Vandana Pathak is dependable as always. Shraddha Dangar is lovely and maintains a strong position in the presence of these stalwarts. Sanjay Goradia raises loads of laughs. Neel Gadgani is the surprise of the film. Meghana Solanki (Falguni; Shamlu’s wife) and Aakash Zala (Natu; Rajubhai’s helper) are great while Dharmesh Vyas (Shaunak) leaves a mark in a cameo.

Sachin-Jigar‘s music is superb and their best work in a long time. ‘Utho Utho’ is quite catchy and is apt as the intro song. ‘Vahurani’, sung by Falguni Pathak, is the best track of the lot and very well executed. ‘Holi Aavi Aavi’ can become the mandatory song to be played at Holi parties from next year. Visually, it’s a treat as it features cameos of Pratik Gandhi, Esha Kansara, Vyoma Nandi, Parth Oza and Tanishkaa Sanghvi. Sachin-Jigar‘s background score is in sync with the film’s mood.

Vipul Mehta‘s story is very promising. The premise of the dead wife returning is intriguing. Vipul Mehta‘s screenplay is highly effective. He has peppered the script with tons of comical, and even touching moments and it helps in keeping the interest going. A few aspects, however, are difficult to digest. Abhinay Trivedi‘s dialogues enhance the fun quotient and also help justify the title of the film, as it’s about a character who likes to mouth sayings and idioms at any given opportunity.

Vipul Mehta‘s direction is supreme. Viewers want clean entertainment from Gujarati films, and also the content should appeal to the whole family. Kehvatlal Parivar fulfils this criteria completely. Moreover, unlike Chaal Jeevi Laiye that was too emotional in certain places, Kehvatlal Parivar doesn’t get intense or emotionally heavy. A few moving scenes are also treated in a light-hearted way. Also, the film also gives out a nice message without getting preachy.

On the flipside, a few developments are bewildering, especially with regards to the mother returning back after so many years. Secondly, a few things are rushed in the second half. Nevertheless, the film has a lot going in its favour and hence, there won’t be any major reason to complain.

On the whole, Kehvatlal Parivar has all the ingredients that one looks for in a Gujarati film – clean, family-friendly content, humour, emotions and Siddharth Randeria’s starry presence! The performances of the rest of the cast, super-hit music and the food element also make it worth watching. The film was released in cinemas on May 6 and the word of mouth has already started attracting audiences. Hence, it has the chance to emerge as one of the biggest hits of Gujarati cinema.