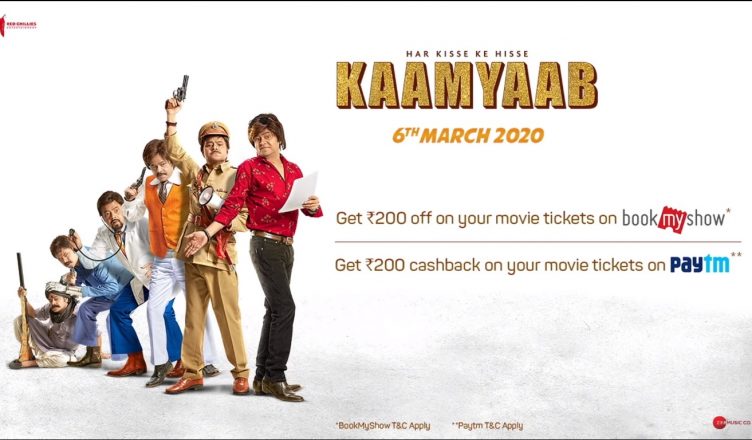 The Mumbai Film Festival in its 21st edition this year showed two films that touched upon the lives of the forgotten junior artists and character actors of Bollywood. Gitanjali Rao’s animated flick Bombay Rose slightly touched upon this aspect through one of its female characters who is an Anglo Indian and who once worked in the movies. Hardik Mehta however makes a film, titled Kaamyaab, and has the central character as a forgotten artist. Funny, entertaining and poignant, Kaamyaab emerges as a kaamyaab effort by the whole team!

The story of the movie: Babulal Chandola aka Sudheer (Sanjay Mishra) has been working in films since a few decades. He has essayed various kinds of roles in films belonging to different genres. In his last film however, he had a traumatic experience and hence he quit acting for good. One day, a journalist interviews Sudheer and casually mentions that he has worked in as many as 499 films. Sudheer gets thrilled by this information and realizes he should do one more film to reach the 500 mark. He approaches Dinesh Gulati (Deepak Dobriyal), a famous casting director who considers Sudheer his guru. Sudheer expresses his interest of doing a memorable role for his 500th film. Gulati takes his audition for a biggie that’s going to release on Diwali next year. It’s a period film and the role is that of the hero’s father. Sudheer gives a great audition. The producer however wants to cast Avtar Gill. But Gulati insists that the producer takes a look at Sudheer’s audition tape. The producer agrees and realizes that Sudheer fits the bill. Sudheer hence gets his 500th film. Sadly, things don’t go as planned for him.

Kaamyaab has a fantastic beginning which takes the story forward and at the same time, one also gets acquainted with the vast career of Sudheer. In the first 15 minutes, it is established that Sudheer wishes to act in his 500th film and his relationship with his family. The entry of Dinesh Gulati and the audition process adds to the fun. Post-interval, the interest is maintained as the shooting of the 500th film begins and how Sudheer goofs up. The film then slips and the interest level dip at this point. But in the finale, the film goes on another level. The ending might seem abrupt but it’s the best culmination for the film.

Sanjay Mishra owns the film. Arguably, this performance is even better than the one he gave in Aankhon Dekhi! The character he plays has his own flaws and yet, he manages to arouse empathy. Here’s hoping Kaamyaab gives him loads of recognition and catapults him into ‘Pankaj Tripathi’ category because he deserves it. Deepak Dobriyal is the surprise of the film. He’s completely into his character and rocks the show. Sarika Singh (Bhavna) is quite efficient and leaves a mark in the school scene. Akashdeep Arora (Shibu), last seen as Ishaan in Uri, is dependable. Isha Talwar (Isha) is superb and her track has its moments. Kaurwakee Vasistha (Anu) is sweet. Devika Vatsa, a real-life casting person, does a fine job. Avtar Gill plays himself and is too entertaining. Besides, there are many other actors who play themselves in the film like late Viju Khote, Lilliput, Birbal, Ramesh Goyal, Manmauji, Guddi Maruti, Anil Nagrath etc

Rachita Arora‘s music is forgettable. But the background score is much better. Piyush Puty‘s cinematography is excellent and sans complaints. Ravi Srivastava‘s production design is straight out of life, especially Sudheer’s residence. Darshan Jalan and Manish Tiwari‘s costumes are appealing yet realistic. Prashanth Ramachandran‘s editing is sharp and smooth.

Hardik Mehta‘s story is fantastic. It’s a great tribute to these actors who made a mark in Bollywood but are now completely forgotten. Hardik Mehta‘s screenplay is very effective. The film is just 109 minutes long but packs in a lot and keeps viewers engaged. Radhika Anand‘s dialogues are simple but well-worded. A few dialogues will surely raise laughs and induce claps!

Hardik Mehta‘s direction is supreme. This is first feature film and he handles it like a pro. The love that he has for Bollywood can easily be seen. The most impressive bit of the film is that he has shot footage of Sudheer’s films in 80s and 90s very convincingly. No one will be able to guess that it’s shot in 2018. The shooting sequence in the second half is very realistic. It’s helmed in such a way that one feels like one is actually there on the set. After this scene, the film falls a bit. Nevertheless, a fine effort!

On the whole, Kaamyaab, which releases on January 17, 2020, can emerge as the dark horse of next year. It doesn’t have famous names to pull audiences but can grow through a strong word of mouth. Here’s hoping the film is correctly promoted and that it creates a bit of hype amongst the audiences. Recommended!

Note: This review was published on October 24, 2019 after the writer watched Kaamyaab at the 21st Mumbai Film Festival aka MAMI Film Festival. The film’s release date was then revised and it is now scheduled to release on March 6, 2020