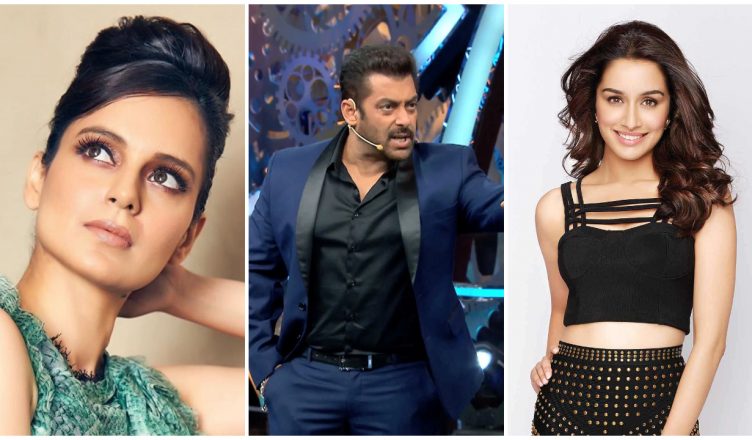 The argument between Kangana Ranaut and a journalist, Justin Rao, that took place at a film event on July 7, has spiralled into something quite big. The entertainment journalists have formed an association called Entertainment Journalists Guild and collectively took a decision to boycott Kangana Ranaut. Kangana hit back, making it clear that she doesn’t mind being boycotted by ‘pseudo journalists’, even calling them termites and other such objectionable terms. Kangana’s sister Rangoli too has jumped in and have made a series of posts. She has retweeted posts of other supporters and the narrative being built is that the reason these ‘bikau journalists’ are against Kangana is because she supports Narendra Modi and the she has exposed Karan Johar. So they are assuming that all the journalists opposing Kangana Ranaut are on the payroll of KJo. These cheerleaders even dared the media to mete out the same treatment to someone like Salman Khan.

Well, these blind fans are completely wrong. Exactly five years ago, in July 2014, a section of media – the photojournalists – had placed a ban on superstar Salman Khan. At an event held to promote his then film Kick, Salman’s bodyguards had roughed up the photographers who were so hurt by the behaviour that they put a ban. Salman didn’t apologize and from July to November 2014, the ban was in place. It was only during Arpita Khan’s wedding that the ban was lifted.

Just before Salman Khan row, Shraddha Kapoor too faced the ire of the photographers after they alleged that she intentionally avoids them or make them wait for hours at end. At an event to promote Ek Villain, photographers refused to take any picture despite co-actor Riteish Deshmukh and director Mohit Suri intervening. She had to call the lensmen for a peace meeting and regretted behaving in the manner in which she did and assured that it’ll never happen again. Only then was this section of media satisfied. Needless to say, both are productions of nepotism.

So, as one can see, the media is not being hypocritical or unfair with their ban on Kangana Ranaut. And the aforementioned instances prove that whenever the media has got angry, they have taken action. And also, they haven’t distinguished between actors based on their political views or nepotism or any such criteria. Salman Khan was a superstar even in 2014 and yet, the photographers didn’t think twice before banning him.

Also, spats between actors and journalists have happened even before. Go to YouTube and check for ‘Bollywood actor gets angry at journalist’ videos. A few of them are misleading but many videos will depict how celebrities have lost their cool when asked a question which they found to be objectionable. But there’s always a way in making your displeasure clear. What Kangana did at the Sunday event was highly shocking. She accused Justin Rao of ‘hurting her brand’ with his ‘smear campaign’ and also accused him of having ‘gandi soch’! Ironically, Kangana and Rangoli have been doing the same to actors like Alia Bhatt despite the latter not doing anything to get such a reaction from the sisters.

Now talking about the ‘Karan Johar’ factor! Again, a narrative has been built that her enmity with Karan Johar is the reason why the media is angry with her. This is the most laughable of all criticisms. That’s because just two months ago, a large section of media had ripped apart KJo’s college romcom, Student Of The Year 2. The film was heavily slammed for its unrealistic depiction of college life, clothes worn by characters, plot and performances. A month before Student Of The Year 2, Karan Johar’s magnum opus Kalank too was slammed heavily. Funnily, Justin Rao himself had made fun of it too.

Another claim by Kangana’s fans is that she always has to fight her battles alone and got no support from the media during her earlier film, Manikarnika – The Queen Of Jhansi. This lie too can be demolished within minutes. Google for Manikarnika’s reviews and one can see most of the media outlets have given positive reviews to the film. There was a huge applause in the press show, which consisted of these ‘pseudo’ journalists. Agreed that most Bollywood celebs didn’t tweet much about the film or didn’t tweet at all. But does that matter? And is she the only one who gets such treatment?

A few days back, the trailer of Batla House, featuring John Abraham, was unveiled on social media. A handful of celebs have praised the trailer on social media while the vast majority didn’t even bother to write anything about it. Last year, John Abraham faced the biggest test of his life when he had to fight an ugly legal battle with Prernaa Arora over his film Parmanu. Before the verdict came in his favour, many in the media interviewed Prernaa Arora who happily chose to give her side of the story. No one from the industry stood up in John’s support. John finally won the case and Parmanu emerged as one of the biggest films of his career. So is John supposed to cry over this attitude? Should he also call names to the media? After all, many didn’t even take sides. They interviewed Prernaa because she was ready to talk and it was a hot topic then. Which journalist would lose this opportunity? The same happened when Manikarnika’s co-director Krish came out with his version. When the media published his interview, it was funnily seen as an agenda-driven step by journalists!

Just like John Abraham, there are plenty of such examples of actors going ahead solo without support. Ronnie Screwvala is fighting against the unjust VPF (Vritual Print Fee) charged by the multiplexes. If he wins, it’ll benefit the whole industry. But no one has openly supported him. He’s still fighting without playing the victim card. Three years ago, Hrithik Roshan, the so-called enemy of Kangana Ranaut and star kid, too was in the same boat as John and Ronnie. His film Mohenjo Daro was to clash with Akshay Kumar-starrer Rustom. Celebs like Alia Bhatt, Salman Khan, Ranveer Singh, Fawad Khan, Arjun Kapoor, Varun Dhawan etc posted pics and videos that helped promote Rustom. No one did the same for Mohenjo Daro. Now imagine if it was Kangana’s film that had clashed with Rustom. Do you think she would have kept quiet with these promotional strategies of Akshay Kumar-starrer?

Having said that, it is not false that some members of the media are against Kangana Ranaut and some do have an agenda. And there’s also no denying that Kangana does get slammed for her political views. But she is not the exception and even the right wingers can’t claim to be free of bias when they day-and-night target anti-BJP actors like Swara Bhasker, Shabana Azmi etc. Check any tweet of Swara and there’ll be some troll who has posted screenshot from her masturbation scene of Veere Di Wedding or at least mentioned about it. Even the right-wing websites like OpIndia are whole heartedly supporting Kangana, which is surely their right, but their article reeks of partiality for Kangana. The article clearly mentions Justin Rao is a ‘journalist’ and thus trying to defame him by presenting him someone who claims to be a mediaperson but is not. Meanwhile, one can’t also deny that Justin Rao indeed went overboard with his posts on Kangana and a few of them indeed were in bad taste. But if you are against Justin for that, it is funny that you’ll support Kangana for doing the same to other people. It is also wrong on your part to cook up stories to spread your false agenda that all in the industry and media hate Kangana.

Sadly, the blind fans will continue to believe despite showing them the reality. They’ll support Rangoli when she’ll accuse celebrities of not taking Kangana’s name while praising Judgementall Hai Kya trailer but won’t mind when she didn’t mention co-star Rajkummar Rao while posting the video of ‘Wakhra Swag’ song! They’ll look the other way when Rajkummar Rao would rubbish reports that he supported Kangana over the Justin Rao episode. They’ll go to any lengths to praise her and overlook her wrongdoings just because they too are fans of Narendra Modi. In doing so, they have become a laughing stock. Thankfully, most of the aam junta too haven’t chose Kangana’s side this time, as compared to previous instances when they felt that her notion about nepotism was justified. Again, I’d like to reiterate that it’s highly unfortunate that this feud is becoming uglier and here’s hoping better sense prevails soon.