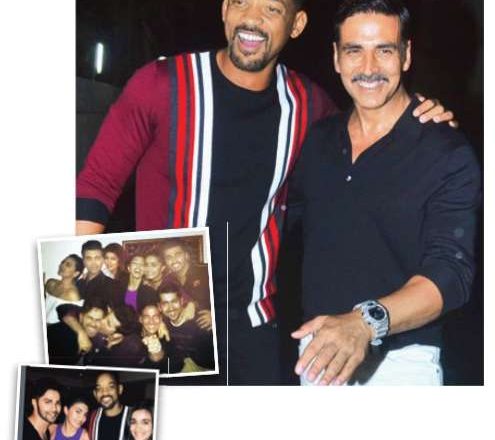 The star-studded party held by Akshay Kumar at his Mumbai would have gone unnoticed or might have come into light pretty late if the paparazzi had not noticed Ranbir Kapoor leaving his Bandra house dressed for a party. The time was 11 pm and he was spotted with director Ayan Mukerji. When the shutterbugs followed the two and reached Akshay’s house, they were amazed to see a bunch of A-listers together: Varun Dhawan, Alia Bhatt, Shraddha Kapoor, Jacqueline Fernandez, Sonakshi Sinha and many more. The details of the party were still not clear. There were murmurs that the actors were ‘partying with a big Hollywood star.’

Soon, it became clear that the star was none other than Will Smith, who had landed in Mumbai 72 hours prior. Akshay got a wind of it and he requested his long-time friend Pooja Batra, based in Los Angeles, to get Will to his party. Pooja got it done and she also attended the bash herself, as she was in the city for a humanitarian initiative. Hence, reports of Will crashing into Akshay’s party to have delicious Punjabi food were rumours after all!

However, Will did have a gala time tasting the various delicacies. It was prepared by Akshay’s personal chefs and the principle items included chicken tandoori, biryani and gulab jamuns. Akshay was spotted digging into a bowl of firni, surprising guests since the superstar is known for being strict about his diet. Twinkle Khanna too was present and she entertained people with her one-liners. Varun got a peck from Ranbir while Sonakshi remained glued to her phone reportedly. Arjun made quite an impact in black pathani salwar. Jacqueline as always was chirpy and she ganged up with Varun to take a dig at Karan Johar’s sparkling shoes.

Will was extremely happy with the lover showered by the Bollywood fraternity. But that’s not all – he’s getting ready for another dose as he attends an all-night party with Salman Khan at his famed Panvel farmhouse.