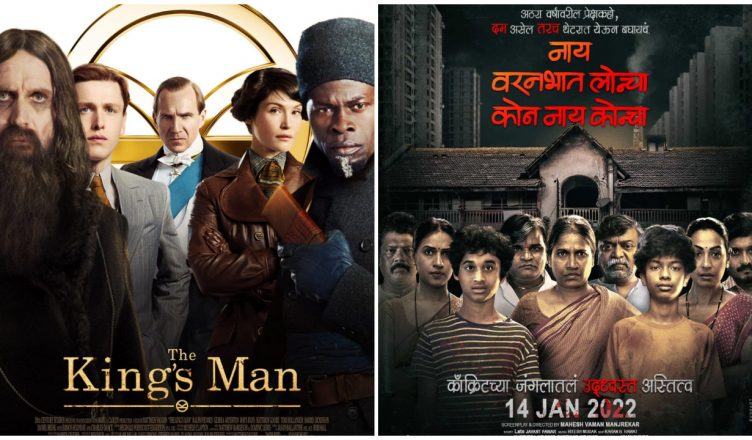 HOLLYWOOD AND REGIONAL FILMS TO RELEASE THIS WEEK

The sudden rise in the Coronavirus cases, driven by the Omicron variant, has once again led state governments to either shut down cinema halls or impose restrictions. As a result, all the films scheduled for a release in January – RRR, Radhe Shyam, Prithviraj, Attack and The Kashmir Files – have been indefinitely delayed. On the positive side, though the number of cases are increasing, a very small number of people are being hospitalized. Out of these, a handful of people are using ICU or oxygen beds. Meanwhile, the cases in Mumbai have started falling gradually, giving hope that the rest of the country would follow suit and that the third wave would not be as deadly.

But the restrictions are expected to remain till January-end at least. Hence, this month won’t see the release of any significant big film. Last week saw the release of no Hindi or English film. This week, however, a few films will be hitting theatres, but these movies belong to Hollywood or regional cinema. The Hollywood movie, The King’s Man, was scheduled to arrive in cinemas on December 28, 2021. It was pushed to January 14 as the studio feared that it would not get adequate screens as a lot of films were running in cinemas then. Many in the trade insisted that The King’s Man should have been released last week, on January 7, as there was no guarantee on whether cinemas would remain open in Mumbai and other major cities on January 14. As luck would have it, except in Delhi, Bihar and Himachal Pradesh, theatres are open almost everywhere, with impositions. Hence, The King’s Man would release without much hindrances tomorrow. In fact, its screen count now will be bigger as there’s no other film up for release.

Speaking of Marathi, two films will be trying their luck at the box office. One is Nay Varan Bhat Loncha Kon Nay Koncha, directed by Mahesh Manjrekar. It has caught attention due to its extreme bold content. The film has been in the news since the National Commission for Women protested after receiving a complaint from the Bharatiya Stree Shakti that the trailer contains obscene content depicting women and minor boys in objectionable positions. The makers have now made the trailer video ‘private’ on YouTube. Nevertheless, this controversy has given the film a boost and it might get footfalls. The other Marathi release is Coffee. It looks like a light-hearted film but the buzz is low.

Down South, few Tamil films have been released today to take advantage of the Pongal holiday. There’s a lockdown in Tamil Nadu on Sunday. Hence, big films have decided to avoid releasing. But smaller films have released hoping that they can get ample footfalls on the festival weekend, and that it’ll compensate for the zero business on Sunday. In Telangana and Andhra Pradesh, there are no major restrictions and a few films would hit theatres, including Bangarraju, starring Nagaruna. The Punjabi cinema is still being very cautious as their crucial markets like Delhi, Gurgaon, Faridabad and Himachal Pradesh are shut.

This is going to be the situation till the end of the month and these small mid-sized Hollywood and regional films would dominate the cinemas. Sadly, theatres in the non-South regions won’t be able to survive on the basis of these films and they’ll need a major Bollywood film to release. When that would happen is a question that can’t be answered at this point, unfortunately.