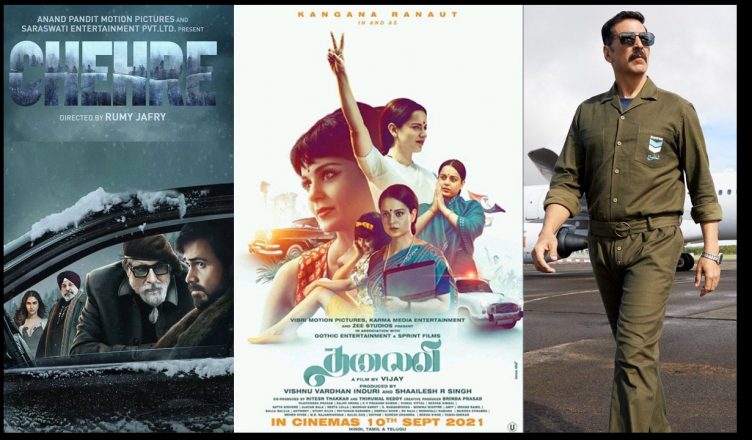 FLOW OF HINDI RELEASES STOPS ONCE AGAIN; HOLLYWOOD AND REGIONAL CINEMA TO DOMINATE

The Akshay Kumar-starrer Bellbottom was released in cinemas on August 19 and it was the first Hindi film since April 2021 to arrive on the big screen. Its release date was announced when cinemas are opening up in many states. It was assumed that the crucial state of Maharashtra, which contributes 30% of the revenue, would also open up by August 19. Sadly, it didn’t and it affected Bellbottom’s performance. Chehre arrived next, on August 26 and it was also released with the idea that Maharashtra would have opened up by then. Finally came Thalaivii on September 10. Its release was planned at a time when it became clear that Maharashtra is not opening up. Yet, the Kangana Ranaut starrer released since it is also releasing in Tamil version and the state of Tamil Nadu has allowed theatres to resume operation.

Sadly, all three films have flopped at the box office. Bellbottom was expected to collect at least Rs. 50-60 crore but its lifetime will now be around Rs. 30 crore. Chehre won’t be able to even cross the Rs. 5 crore mark while Thalaivii won’t go beyond Rs. 7-8 crore. The word of mouth of all three films was positive but these films were not properly marketed. Also, audiences were not excited to see it.

On the other hand, a Hollywood film, Shang-Chi And The Legend Of The Ten Rings, had a surprise opening and is about to reach the Rs. 30 crore lifetime. The two Punjabi films, Puaada and Chal Mera Putt 2, have done extraordinary business. However, the industry has chosen to ignore this part. They have focused only on the dismal performance of the three Hindi films and have decided to not release any major film till Maharashtra is open.

As a result, for the next three weeks at least, no significant Hindi film is releasing on the big screen. The Hollywood films and regional films will now dominate cinemas for a while. Tomorrow, three Hollywood films will release – Free Guy, Don’t Breathe 2 and Old. The first two has a slight chance of pulling audiences. Shang-Chi And The Legend Of The Ten Rings will continue to dominate the business in the coming week too. The next week will see the release of Qismat 2, the sequel of a super-hit Punjabi film Qismat, and the Hollywood entertainer, Jungle Cruise, starring Dwayne Johnson. Finally, on September 30, the James Bond film, No Time To Die, will finally arrive in cinemas and its expected to do huge business in India.