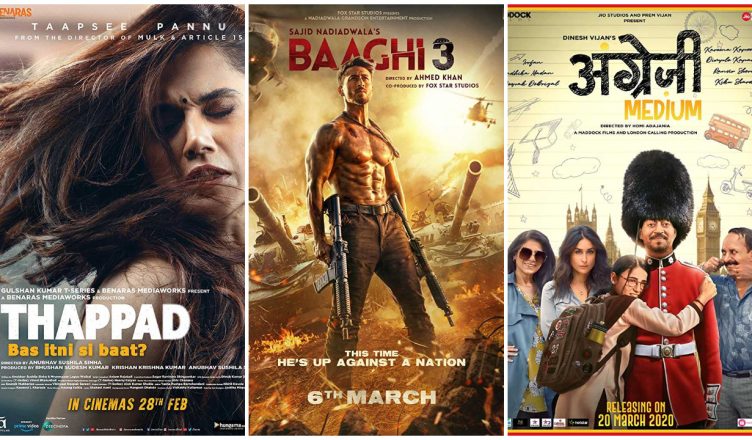 AMID CORONAVIRUS SCARE, COLLECTIONS COME TO A STANDSTILL!

What’s happening right now is unprecedented. As the number of cases of Coronavirus increased, it became necessary to close down cinema halls to prevent the spread of an uncontrollable outbreak. Theatres are places where people sit in close-contact in an air-conditioned environment. The virus can spread in such situations and hence, cinema halls became the first to be closed. The first places to do so were Kerala and Delhi.

Delhi cinemas shut on Thursday March 12 and this led to speculation that Angrezi Medium which released on Friday March 13 might not arrive in theatres. A meeting went on till late night on Thursday between the producers. They realized that they’ll have to bring out the film since the film was out in UAE from Thursday morning and if the India release was stalled, it can lead to massive piracy. One of it’s producers Dinesh Vijan also admitted that if Delhi had closed cinemas before Thursday, then they wouldn’t have gone ahead with the release.

Angrezi Medium opened on Friday and then came the directive that theatres in most centres of Maharashtra are also going to shut down, from Saturday morning. Even Bengaluru joined in. Hence, most urban centres where the Irrfan Khan starrer had the best chance were locked. As days passed, more and more theatres shut. Gujarat and Punjab got shut from Sunday midnight. Finally, on Monday, only few places of Maharashtra, Uttar Pradesh, Haryana, West Bengal and Chandigarh and Tamil Nadu were playing and from Tuesday, all these states stopped cinema halls. Right now, not a single theatre is operational in the country. This has never happened before.

Of course, there have been times when single screens or multiplexes are on a strike. But again, this hasn’t happened all over the country. Also, in 2009, there came a situation when the multiplexes and film producers had a fight, resulting in no new releases for 2 months. Even then, a few films were playing in cinema halls and also regional and Hollywood films were releasing. Right now, the situation is even worse.

All the films that were running in cinemas got affected, with the more latest release got affected more. Thappad had completed almost 80-85% of it’s collections till Thursday March 12. In the weekend gone by, it did minimal collections, considering the scare but managed to reach till the Rs. 29.80 crore mark.

Baaghi 3 released in March 6 and it got a bit affected by a combination of factors like not-so-great trailer, flop music and a little bit of Coronavirus scare. The scare began to increase as the days passed but still it did fair and also got advantage of Holi. But then the collections came down and in second weekend, it crashed because of theatres shutting. It’s final collections stand at Rs. 92.68 crore.

Finally, Angrezi Medium got heavily affected as it released at a time when the scare was quite high. In its 4 days, it managed to collect just Rs. 9.35 crore. Surprisingly, even without Delhi and the scare, it earned Rs. 4 crore on day 1. In normal times, it would have earned Rs. 5 crore easily and in 4 days, the collections would have been around Rs. 23 crore.

The exhibitors and the industry is now hoping that once the situation gets normalized, these films will be able to collect more and get their due. But when exactly that would happen remains to be seen.