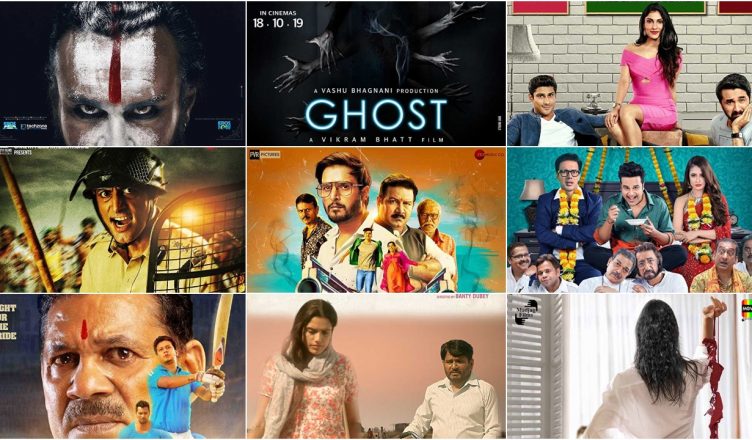 COMPLETE MADNESS AS AROUND 9-10 HINDI FILMS TO RELEASE TOMORROW!

In the past, we have seen how pre-Diwali week is the worst time to release a film. Footfalls are down in the week before the Festival of lights as people are busy shopping and decorating and in cleaning their houses, or going back to their hometowns. Also, biggies release on Diwali and hence, the week before that is usually left vacant by important films. As a result, small films take advantage of the second factor and release their films on this day. In 2016, as many as 7 Hindi films had released in the week before Diwali. This time, the record is broken as at least 9 films are scheduled to hit screens tomorrow. And not just small, one very big film too will be releasing! My analysis:

1. LAAL KAPTAAN: It stars Saif Ali Khan in the role of a Naga Sadhu in the pre-Independence period. It is directed by NH 10 and Manorama Six Feet Under director Navdeep Singh and co-produced by Aanand L Rai of Tanu Weds Manu, Zero and Newton fame. It also features Zoya Hussain, Deepak Dobriyal and Manav Vij, along with Sonakshi Sinha in a special appearance. The film is extremely expensive as it has a period set up and shot in real locations. Moreover, it’s too niche and hence, anyway not many people would watch it. And moreover, it’s being released in such a dull week and that too without any promotion. There’s hardly any buzz for the film and hence, the opening will be disastrous, in the range of Rs. 1-2 crore.

2. GHOST: As the name suggests, it’s a horror film. It’s directed by Vikram Bhatt and stars Sanaya Irani and Shivam Bhaargava. The trailer is nothing exciting and looks like an outdated scary movie. Vikram’s last horror film, 1921, managed an opening of Rs. 1.57 crore as it was kind of a part of the 1920 franchise and also had a known face like Zareen Khan. And times have changed since then. This year, another horror film with known faces, Amavas, starring Sachiin Joshi and Nargis Fakhri, hit screens and it took an opening of just Rs. 60 lakhs. Ghost has no popular name and promotion has been negligible. Hence, day 1 collections would be around Rs. 40-50 lakhs.

3. #YAARAM: It stars Prateik Babbar and Siddhanth Kapoor along with Pyaar Ka Punchnama actress Ishita Raj. The makers tried to publicize this film by claiming ‘it’s a love square and not a love triangle’ and even mentioning in the trailer that it’s the most controversial film of the year. But audiences aren’t interested. It looks too urban and hence it only has a chance in multiplexes. But audiences there would rather see Laal Kaptaan or holdover films like War and Joker than this movie.

4. OFFICER ARJUN SINGH IPS: Starring Priyanshu Chatterjee and Raai Laxmi, it looks like a dated 90s flick not just content-wise but even visually. It has a very slim chance and that too in small towns of Northern states.

5. P SE PYAAR F SE FARAAR: This seems like a poor copy of Sairat with a dash of sports. Newcomer Bhavesh Kumar plays the lead and surprisingly Jimmy Sheirgill has a supporting role. The latter is not as much in the trailer as Bhavesh. It is all set to get a less-than-Rs 10 lakh opening, just like Officer Arjun Singh IPS.

6. LIFE MEIN TIME NAHI HAI KISI KO: Apart from P Se Pyaar F Se Faraar, this is the other inter-caste marriage related film of the week. The trailer indicates that this movie speaks about some important issues plaguing the society. But the background score is funny and peppy and doesn’t gel well with the narrative. Krushna Abhishek, Rajniesh Duggall and Yuvika Chaudhary are the leading actors.

7. KIRKET: This film stars former cricketer Kirti Azad playing himself and stressing the importance of having more Biharis in the Indian Cricket Team. Sadly, the film won’t work anywhere, not even in Bihar, due to zero awareness.

8. JACQUELINE I AM COMING: It stars Raghubir Yadav and Divya Dhanoya and the trailer is quite bizarre. It starts off as a slice-of-life love story of an older man and a very young woman. But then the film suddenly changes to an unrealistic crime drama. A film like ideally should have released directly on OTT as it’s collections in cinemas will be in thousands, not in lakhs.

That’s not all. There are two films – Junction Varanasi and Zindagi Tumse – that were also to release tomorrow. As of now, they won’t release but one can never be sure.

And yes, there are two Hollywood films as well – Maleficent: Mistress of Evil and Zombieland 2: Double Tap. Both these films too will open to poor houses although the former might open in the same range or better than Laal Kaptaan!