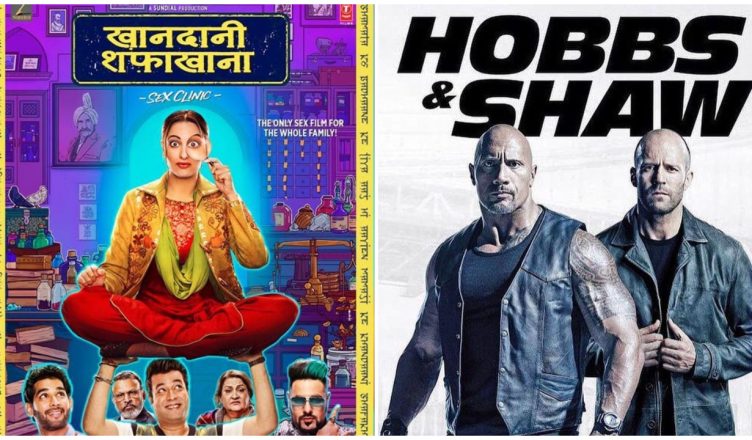 WILL SONAKSHI SINHA’S SMALL FILM BE ABLE TO WITHSTAND FAST & FURIOUS SPIN OFF?

The month of August will begin on a fair note for Indian audiences. Two medium-budget Bollywood films were to release tomorrow but one of them (Jabariya Jodi) was pushed ahead. Hence, now one Hindi film will be hitting screens along with a big Hollywood flick. My analysis:

KHANDAANI SHAFAKHANA: It is the story of a girl who is compelled to run a family-owned sex clinic. It’s in the Vicky Donor zone and attempts to question the taboos and myths surrounding sex in our society. Sonakshi Sinha features in the lead role along with Varun Sharma, Annu Kapoor and Kulbhushan Kharbanda. The film also features singer Badshah in a supporting role and it also serves as his acting debut. In keeping with the current trend, the makers have remixed iconic 90s song ‘Shehar Ki Ladki’ and roped in Diana Penty and the actors in the original version, Suniel Shetty and Raveena Tandon, in the music video. But the hype for the film is negligible. A similar female-centric film of Sonakshi Sinha, Noor, had opened at Rs. 1.20 crore. And last week’s Arjun Patiala opened at just Rs. 1.25 crore. Noor however seemed too urban and niche while Arjun Patiala’s prospects were also limited because of the spoof comedy genre. Khandaani Shafakhana at least seems a bit mainstream. Hence, the opening will be more than these two films but it won’t be more than Rs. 1.75-2 crore. From the trailers, it seems like a good product and if response is positive, it can grow substantially in the weekends and sustain well in the weekdays. Yet, with such a low opening, a lifetime of Rs. 18-20 crore is the maximum it can reach, which is not a good result for the film.

FAST & FURIOUS: HOBBS & SHAW: This is the part of the very popular Fast & Furious franchise, which has a following in India. But this is like a spin-off of the series and stars Dwayne Johnson, Jason Statham, Idris Elba, Vanessa Kirby and Helen Mirren. The trailer as expected is spectacular and the film surely deserves a big-screen watch. It’s releasing in 3D and IMAX as well and these versions would surely get footfalls in hordes. However, the film’s buzz is limited since Vin Diesel is not casted. He’s like the face of the film in India and in his absence, the collections will suffer. Also, it has been awarded adults-only certificate. Fast & Furious 7 was also given ‘A’ certificate. However, that was the biggest film of the franchise, chiefly because it was the last film of late Paul Walker. Fast & Furious 7 opened at Rs. 12 crore while Fast & Furious 8’s full-day opening collections were Rs. 9 crore, with Rs. 5 crores from paid previews. Fast & Furious: Hobbs & Shaw would be able to open in the range of Rs. 7-8 crore and has an outside chance of collecting Rs. 9 crore. The eighth part managed to earn Rs. 86.97 crore in its lifetime while part 7 collected Rs. 97.86 crore. In the absence of Vin Diesel, there’s no chance Fast & Furious: Hobbs & Shaw can go beyond Rs. 65-70 crore.