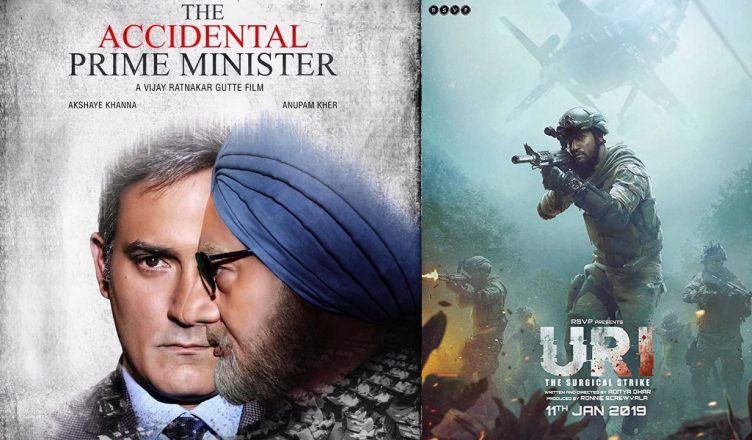 2 POLITICAL FILMS TO START THE ACCOUNT FOR BOLLYWOOD IN 2019!

The second January Friday is here and this is when the flow of films begin. Last week had two inconsequential releases and hence aren’t counted. Tomorrow will see the release of two significant films and coincidentally, both are political flicks. My analysis:

URI: It is a film based on the 2016 surgical strikes undertaken by India on Pakistan after the ghastly Uri attack on the army. It is considered as one of the most successful achievements of the Indian forces. The film is directed by debutant Aditya Dhar and stars Vicky Kaushal, Yami Gautam and Kirti Kulhari. Paresh Rawal incidentally plays National Security Advisor Ajit Doval while Rajit Kapur essays the role of Prime Minister Narendra Modi. The film also marks the impending debut of dashing TV actor Mohit Raina. Vicky Kaushal was not that known when he signed the film. But 2017 changed the tide for him as Sanju and Raazi turned out to be huge successes and he got noticed and praised for both. Also, his web film Love Per Square Foot opened to great response and his track in Lust Stories got the maximum coverage. As a result, Uri is much awaited not just because of the subject but also due to Vicky Kaushal’s presence. The trailer looks great and the film can have a good opening of around Rs. 6-7 crore. If response is positive, it can have a weekend of Rs. 30 crore and lifetime of around Rs. 75-80 crore or maybe even more. It faces a challenge next week with almost 5 major releases and they’ll take away some screen space even if Uri is doing well. Still, it can sustain and earn handsomely, provided of course the audience accepts the flick.

THE ACCIDENTAL PRIME MINISTER: It is based on the book by the same name, written by Sanjaya Baru. He was the media advisor of Manmohan Singh during his tenure as Prime Minister from 2004 to 2008. Anupam Kher plays the titular role while Akshaye Khanna steps into the shoes of Sanjaya Baru. The film’s trailer was launched just 15 days before release and it became the talk of the town. After all, the film attempts to show how Manmohan was selected for the PM’s post and was to be retained till Rahul Gandhi was fit enough to usurp the throne! The film even has characters playing the roles of Rahul, Sonia Gandhi, Priyanka Gandhi, Atal Bihari Vajpayee etc. It’s interesting to see that all real names are used which is rare and probably a first for such kind of a film. The premise of the film also made many question the motive and whether it was funded by BJP, rivals of Congress and Gandhis. That BJP’s official Twitter handle shared the trailer of the film led to a lot of controversy. All these factors helped the film stay in news. It is not a usual massy film but the curiosity of the film is there and it can help the film fetch an opening of around Rs. 2-3 crore. Uri however will be a major competitor since it looks far more exciting and has action. The Accidental Prime Minister will really have to be engaging and only then will the film be able to sustain well in cinemas.