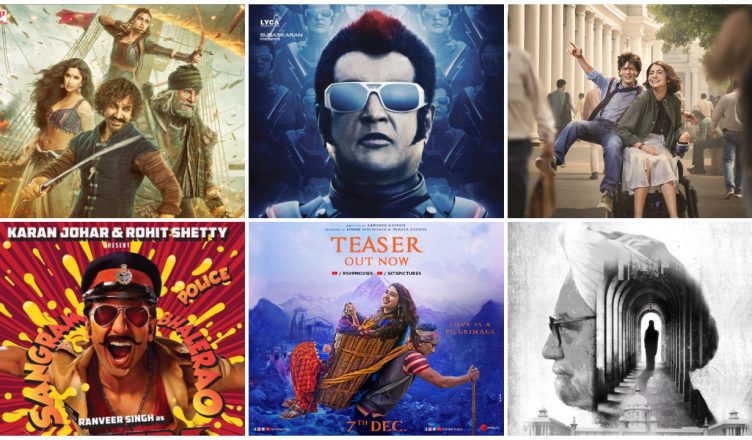 The last two months of the year are here and this time, it’s going to be special. Usually, in these two months, we only find a significant film release during Diwali and during Christmas. There’s nothing worthy in between or one which is hugely successful. At times, Diwali falls in October and hence, it’s only the Christmas release that turns out to be the sole big grosser of the last two months.

But November and December of 2018 is going to be different. As many as 4 biggies would be releasing and all of them look very exciting and potential blockbusters. Collectively, these films can earn mind-boggling Rs. 1000 to 1200 crore! The first one would be the next week’s Diwali release, Thugs Of Hindostan. Starring Aamir Khan, Amitabh Bachchan, Katrina Kaif and Fatima Sana Shaikh, this is a grand period action drama mounted on a huge scale. The reaction to the trailer is not unanimous and songs haven’t worked. But the film looks quite massy and moreover, it’s a film that deserves a big screen watch. The opening can be earth shattering and it can earn Rs. 200 crore in less than a week if all goes well. The lifetime of the film is expected to be around Rs. 350 crore and it remains to be seen if it can break the record of Dangal which stands at Rs. 374.53 crore.

Before November ends, audiences would be treated with the much awaited flick 2.0, the sequel to the Rajinikanth starrer Robot. Rajinikanth this time is joined by Akshay Kumar who plays an evil quasi-human character. The teaser seems exciting and it remains to be seen if the trailer lives upto the humongous expectations. It’s a tri-lingual film and it’s Hindi version can easily fetch Rs. 250 crore at the box office. It should go higher if the response is positive.

In December, Shah Rukh Khan will present Zero, which sees him as a lovable dwarf. Also starring Katrina Kaif and Anushka Sharma, this flick is directed by Aanand L Rai and looks very exciting. The trailer will be out tomorrow but a section of the media has already seen and has gone gaga over it. It releases on December 21, during the beneficial Christmas and New Year’s time. With such an interesting premise and character, the film can rake in a lot of moolah. Many feel that it can be Shah Rukh Khan’s first Rs. 300 crore grosser.

Finally, Ranveer Singh-starrer Simmba would release on December 28. The actor teams up with the hit machine Rohit Shetty for this action cop drama which is a loose remake of the Telugu hit Temper. The first look and the few videos released by the team seem quite exciting. The film is on the lines of Shetty’s most appreciated film, Singham. And if it manages to reach the level of Singham, there’s no stopping this one. It can be Ranveer Singh’s second Rs. 200 crore grosser in a row after Padmaavat!

Besides these four films, there’s also Kedarnath, starring Sushant Singh Rajput and Sara Ali Khan. The teaser indicates that the film is quite grand and spectacular. The flood scenes are very well depicted. Hence, expect this film to do great business anywhere in the range of Rs. 80-100 crore, if all goes well. And lastly, there’s The Accidental Prime Minister based on the ex-Prime Minister Manmohan Singh. The film will surely be talked about a lot and it might translate into healthy box office numbers of around Rs. 30-40 crore.

Even if one or more films fail to achieve the desired number, the final tally of these films would still be quite high and easily the best in many years. Here’s hoping all the films works well and manage to bring smile and cheer for the audiences, producers, distributors and exhibitors alike!