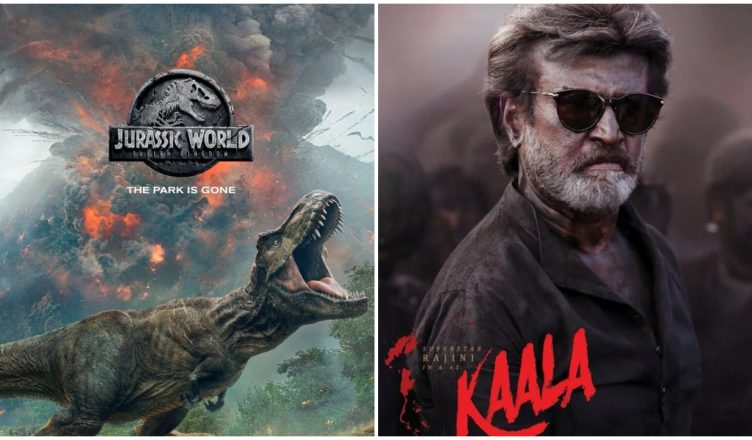 NO HINDI FILM THIS WEEK; DINOSAUR VS RAJINIKANTH TO HAVE A CLASH!

This Friday, no significant Hindi film would be having a release for 2 reasons. Firstly, the biggie Race 3 would be arriving in theatres next week and hence, whichever film would have come this Friday would have got just 1 week to score. Secondly, this week sees the release of 2 big non-Hindi films – the Hollywood flick Jurassic World: Fallen Kingdom and Rajinikanth-starrer Kaala. My analysis:

JURASSIC WORLD: FALLEN KINGDOM: This is a sequel to Jurassic World (2015) and it’s a film that has a lot of potential in India. After all, the Indian audiences have been quite impressed with the entire dinosaur bit right from the time the first Jurassic Park (1993) released. In fact, this film was very significant as it had collected Rs. 7.5 crore, which is equal to Rs. 125 crore today. Hence, it was one of the first Hollywood blockbusters of India. Even Jurassic World did very well despite release with limited buzz. The film sustained very well and went on to collect Rs. 90.62 crores, which is huge. It is the fourth largest Hollywood grosser in India. Jurassic World: Fallen Kingdom too releases without much hype and like many Universal films, it’s releasing in India tomorrow instead of Friday. The chances are remote that it’ll cross the collections of Jurassic World. Also, there’s some problem with the distributors and exhibitors over revenue sharing of 3D shows. Hence, as of now, it seems that Jurassic World: Fallen Kingdom won’t sadly have a 3D version in India. This would limit its box office prospects. But if word of mouth is positive, it can do well as it’s an open week. Even after Race 3, it can manage to sustain.

KAALA: It stars superstar Rajinikanth in a leading role and also features Nana Patekar and Huma Qureshi. It is produced by Dhanush and directed by Pa Ranjinth. The film shows Rajinikanth as a gangster in Dharavi slums and from the trailers, it seems to be a very massy role. The film might be a rage down South in Tamil Nadu. But in Mumbai and North, the Tamil version obviously won’t do much. The Hindi version too would find limited takers. And the dubbed version will have just a week to make a mark and after Race 3, it would hardly have shows.