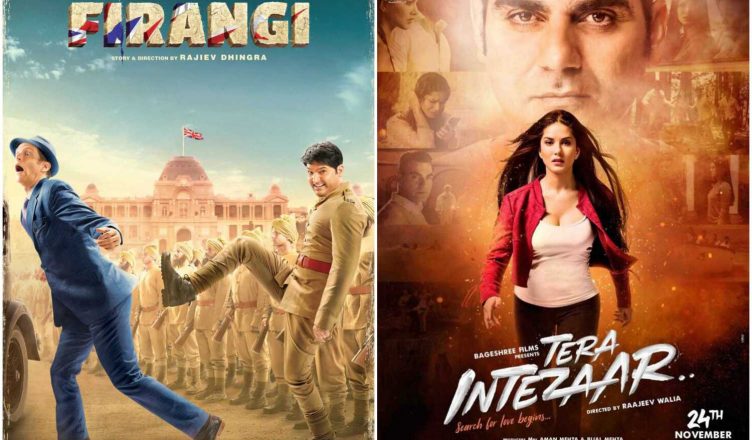 Tomorrow is December 1, the day when the most awaited period film Padmavati was going to release. But due to the numerous protests, it had to be postponed indefinitely. On the other hand, Tera Intezaar and Firangi were to release last Friday (November 24) but due to Censor issues, both couldn’t get a release then. With Padmavati being pushed ahead, it was luck on the side of these makers as they could postpone their films by a week and not find any competition. A rarity! My views on these two films:

FIRANGI: It is the second film of Kapil Sharma and the first film produced by him. His debut film Kis Kisko Pyaar Karoon featured him in a comic role and in sync with his avatar on his TV shows, Comedy Nights With Kapil and The Kapil Sharma Show. But Firangi shows a different side of Kapil Sharma. Here he’s a playing a character and it looks straight out of life. It’s based in a village in Punjab during the pre-Independence era and how Kapil’s character joins the British at a time when they were hated. The film is directed by Rajiev Dhingra, who is a close friend of Kapil. The film looks nice and has a nice rustic, Punjabi appeal. Hence, it has more chances in the North. But overall, the buzz is limited and hence, the opening will be moderate to poor. Also, the film is quite long (158 minutes) and it needs to have enough entertainment to be engaging from start to finish. A good word of mouth can work wonders for the film.

TERA INTEZAAR: This looks like a dated film. Starring Sunny Leone and Arbaaz Khan, it has some hot scenes but overall, the trailer was laughable. 4-5 years ago, a film featuring Sunny Leone would work a bit if it had sex scenes. But now times have changed. Tera Intezaar will have a disastrous opening and it’ll have a tough time at the box office.