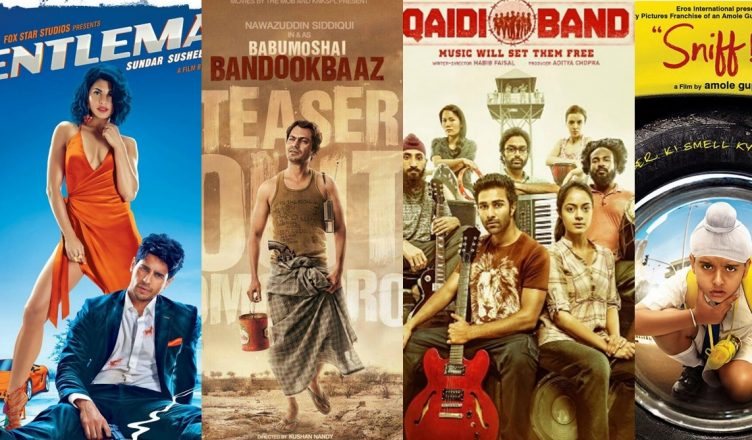 8 FILM RELEASES TOMORROW; ONLY A GENTLEMAN AND VIVEGAM TO MAKE A MARK!

On June 1, I had reported about deluge of Hindi releases on Friday June 2 – Dobaara, A Death In The Gunj, Dear Maya, Hanuman Da Damdaar, Sweetiee Weds NRI and Mirror Game. Apart from these releases, two Hollywood biggies, Wonder Woman and Baywatch, also hit screens apart from a Marathi biggie, FU. Something similar will happen tomorrow when five Hindi films are all set to release. Then there are also two Hollywood films – The Hitman’s Bodyguard and The Dark Tower – releasing. And down south, superstar Ajith’s Tamil flick Vivegam will hit screens which is expected to dominate Bollywood films hugely. My analysis on the Hindi releases:

A GENTLEMAN: It stars Sidharth Malhotra and Jacqueline Fernandez and is directed by Raj Nidimoru and Krishna DK, who are known to make quirky entertainers like 99, Shor In The City and Go Goa Gone. The film initially was believed to be a sequel to Bang Bang. Then the film was titled as Reload or Reloaded. It was recently that the title of the film was unveiled. From the trailers, it looks like a fun action entertainer. Music hasn’t been huge but has got noticed. Sadly, A Gentleman is not the massy action entertainer, like Dabangg, Singham or even Wanted. It looks too classy and might hence appeal more to the multiplex and urban audiences. It’ll surely get the best opening among all Bollywood releases.

BABUMOSHAI BANDOOKBAAZ: It features Nawazuddin Siddiqui and Bidita Bag and is directed by Kushan Nandy. It seems more in the Gangs Of Wasseypur space. The trailer is interesting and it seems like the film has adequate dose of sex, action and humour. The film made noise recently when Censor Board asked for around 45-48 cuts. But the makers took the film to the Tribunal and got the film passed with very few voluntary cuts. Such adult-rated films anyways appeal to only a section of audiences. With competition from A Gentleman, Babumoshai Bandookbaaz will be affected despite both films being different. Opening will be just okay or even poor. A good word of mouth will ensure the film turns successful.

QAIDI BAND: This is the launch vehicle of Raj Kapoor’s grandchild Armaan Jain and Anya Singh. Directed by Habib Faisal, it is set in a jail and is about a group of prisoners who start a band inside. The trailer is highly impressive but the promotional strategy is poor. Songs haven’t worked at all. It is directed by Yash Raj Films (YRF), who are known to enhance the buzz for their films with minimal publicity. In case of Qaidi Band, it has failed to even make people aware of this film, forget making them excited for it. It’s also bewildering why this film is releasing in the midst of so many releases. It’s a big folly by YRF that can cost them dearly. Are they trying to come before Lucknow Central, the September 15 release that shockingly is also about prisoners opening a band in jail?

SNIFF: It is directed by Amole Gupte, who has made kiddie films like Stanley Ka Dabba and Hawaa Hawaai in the past. This film is about a child detective, who has extraordinary powers of smell. It is the first film produced by Ajit Thakur’s Trinity Pictures, which is a part of Eros International. The film looks great from the trailers but again, awareness and excitement is negligible. On top of it, it releases among so many films and is bound to get lost. The makers probably should have tried to release this film on a different date, even clashing with a biggie. For instance, releasing Sniff with Toilet – Ek Prem Katha would have been a more sensible decision. At least, it would have got noticed and got required number of screens.

MUSKURAHATEIN: This is a sure-shot disaster and looks unintentionally funny. The trailer begins showing Sanjay Mishra fooling around and even dancing on a booze-themed song. But halfway through the trailer, it is revealed that he’s not the lead, it’s Dr J S Randhawa who is the ‘main hero’. His acting and expressions are silly and I was wondering how on earth he bagged the role. I guessed that he must be the director of the film and I was right!