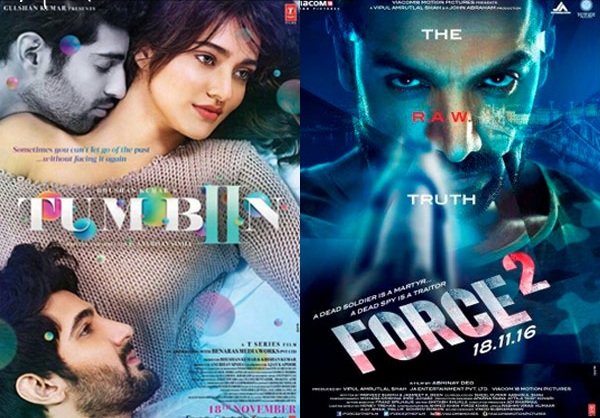 It’s going to be a one of its kind clash tomorrow. Two sequels, Force 2 and Tum Bin 2, are going to release on Friday – something like this has not happened in the past as far as I remember. Tum Bin 2 as such is not a sequel but is a part 2 of the Tum Bin franchise. What’s interesting to note is that the first parts of Force and Tum Bin were not big hits. And the sequels don’t look so exciting either. My analysis:

FORCE 2: John Abraham is retained but the leading lady of part 1, Genelia Deshmukh, is missing as her character dies in the first part. However, she has a cameo in the film. Sonakshi Sinha is the leading lady and Tahir Raj Bhasin is the villain. This time, the story talks about our unsung heroes – the RAW agents and spies and their contribution to the country. Force was directed by Nishikant Kamat but Force 2 is helmed by Abhinay Deo, who has created a niche for himself thanks to Delhi Belly and first season of 24. The trailers are exciting but look a bit similar to John’s earlier 2 films this year – Rocky Handsome and Dishoom. Also, the songs haven’t worked. Hence, the opening won’t be great. But if the film is good and has massy elements, it can work big time in single screens.

TUM BIN 2: Tum Bin was the first film produced by Bhushan Kumar and was directed by Anubhav Sinha. It became a huge hit, despite no known names, and one of the major reasons was its songs. Tum Bin 2 attempts to recreate the same magic. Hence, it casts relatively unknown faces – Aditya Seal, Neha Sharma and Aashim Gulati and the romance is ‘clean’. However, where Tum Bin had a super hit album, Tum Bin 2 doesn’t. The cost thankfully is limited but it will be an uphill task for the film for sure. It’s a family entertainer and one can never underestimate such films.

Moreover, the demonetization of Rs 500 and Rs 1000 notes might also affect both the films, although it’s still not sure how much it can affect.

WHICH FILM WOULD YOU LIKE TO SEE AND WHY? DO LET US KNOW!