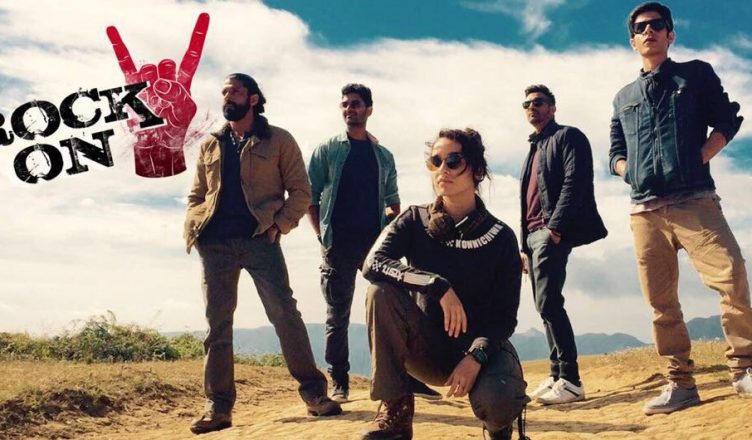 Sometimes it’s easy to forgive others even when they have deceived or betrayed you terribly. But sometimes, it’s extremely difficult to forgive your own self and to move on. Rock On 2 deals with this aspect and tries to blend it with the theme of music that the film is based on. The first part was a great entertainer and quite touching as well. Rock On 2 sadly fails to reach that level. At best, it’s an average fare!

The story of the movie: It’s been 5 years since the band Magik have performed together. KD (Purab Kohli) left his father’s business and is dabbling into music. Joe Mascarenhas (Arjun Rampal) runs a bar and is a judge on a reality show. Aditya Shroff (Farhan Akhtar) on the other hand has shifted to Meghalaya, leaving behind his wife Sakshi (Prachi Desai) and son Rob, after a huge tragedy. In Meghalaya, he’s trying to bring development by helping the poor villagers. Things change when Magik band members reunite and they bump into Jiah Sharma (Shraddha Kapoor), an aspiring singer.

Rock On 2 begins well although it doesn’t go quite high. The characters and their journey since the last installment are nicely put forward and there’s also a mystery as to what went wrong. The sequence where the Magik members reunite in Meghalaya is heartening. The tragedy that occurs in the hilly state is shocking. The best however is reserved for the intermission point – it comes as a bolt from the blue! Post-intermission however, things begin to slide down. The film gets too stretched. Moreover, the songs – the soul of the film – are just not happening enough. The challenges that the Magik members face while putting up the concert make for a great and even thrilling watch. Even the concert sequence starts off with a high. But then, it goes a bit downhill. The climax of Rock On was memorable as there was enough tension, entertainment and combined with some great songs, the impact was huge. But in case of Rock On 2, that doesn’t quite happen. Also, there are some unconvincing moments in the narrative that should have been avoided.

Rock On 2 however is embellished with fine performances. Farhan Akhtar as always looks dashing (his new look is cool) and does a fine job. It doesn’t look like he’s playing some other character – the nuances that he had brought alive with the first part are very much alive in Rock On 2. And his singing is also decent, though the ‘magik’ of the first part somewhere is missing. But he alone can’t be blamed for it as it has more to do with the quality of songs in the sequel as well. Shraddha Kapoor looks charming and performance wise, she does well. The way she brings alive the introvert side of Jiah is praiseworthy. Her singing is quite nice. Arjun Rampal looks quite dashing, despite his long hair missing! He delivers a rocking performance. The sequence where he blasts KD and others is brilliant. Purab Kohli is very adorable. And he does such a cool job as the ‘sutradhar’ as well. Prachi Desai delivers a great performance and looks stunning. Shahana Goswami (Debbie) is there just for one sequence and as always, she is fine. Shashank Arora (Uday) does a fine job in the supporting role. He does very well in his initial scenes. Priyanshu Painyuli (Rahul) leaves a major mark in the film. His character is quite integral to the plot. Dinesh Kumar (Manjot) wins hearts. Kumud Mishra (Pandit Vibhuti) is okay. Others are fine.

Shankar-Ehsaan-Loy’s music is quite alright. They have worked hard but the benchmark set by the first film is damn high. And the songs just don’t reach there. Even individually, the songs don’t make that kind of impact. Jaago, Udja Re, You Know What I Mean, Manzar Naya, Tere Mere Dil and Woh Jahaan are just okay songs. The best one however is Hoi Kiw/Chalo Chalo – this song makes the maximum impact. Usha Uthup, Kit Shangpliang, Pynsuklin Syiemiong, Vishal Dadlani and Siddharth Mahadevan appear in cameos and are good. Background score is subtle. Marc Koninckx’s cinematography is exciting. Pubali Chaudhuri and Abhishek Kapoor’s story is quite nice, without doubt. Pubali Chaudhuri’s screenplay is quite stretched and that’s one of the big reasons why the film loses sheen after a point. Shujaat Saudagar’s direction is decent but with a not-so-great screenplay, even he could have done little to salvage the situation. Anyways, one can’t go overboard with such a film since its first part boasted of simple direction.

On the whole, Rock On 2 is an average fare at best. The performances are fine and even the storyline has potential. But the film is too long due to which the impact is diluted, especially in the second half. Also, the songs are just not exciting and this really takes the film down. On the positive side, the film has some fine moments that keep the interest going. At the box office, Rock On 2 unfortunately is going to face a very tough time.