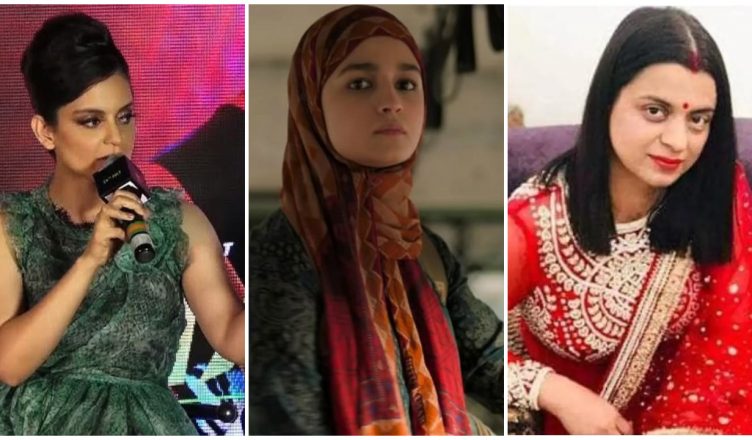 Firstly, congratulations on the way you have been exceling professionally. You just delivered a successful film in the form of Manikarnika – The Queen Of Jhansi. Your upcoming film, Judgmentall Hai Kya, looks promising and I am looking forward to it. Your other films like Panga, Dhaakad and biopic on Jayalialithaa too sound quite exciting. The way you have become one of those rare heroines who can single-handedly get audiences to cinemas is rare and quite commendable!

However, off late, it’s been quite disappointing to see the way you have going all out while criticising your critics and other members of the film fraternity. Things went to another level yesterday when you had a shocking argument with a reporter named Justin Rao at the launch of the song ‘Wakhra Song’ from Judgmentall Hai Kya. I am not getting into all the claims and counter claims that he hung out with you in your vanity van along with having lunch and later messaged you. My focus is on the statements you made like “I know how you are harming my brand” and “You’ve been doing a smear campaign on me”. Justin claimed that he simply has 600 followers on Twitter and hence, and that too by his own admission, a person with such kind of following can’t really make or break any person. But you remained adamant.

A quick look on the Twitter timeline of Justin Rao’s handle will make it evident that it’s not like he’s solely targeting you. He has a point of view and when he has an issue, he voices his opinion. For instance, he recently shared his view on Sandeep Reddy Vanga’s much-talked about interview. He also has an opinion on Alok Nath’s presence in De De Pyaar De, Tik Tok’s temporary ban, Kalank being funnier than Total Dhamaal etc. Agreed he has brought you on quite a many occasions. Let’s assume for once that his anti-Kangana tirade really come under the ‘smear campaign’ category. But then shouldn’t the same rule apply to you as well? You have targeted so many celebrities. Agreed that some like Karan Johar have also talked ill about you and hence, you had the right to hit back. But what about Alia Bhatt? Show me one instance where she criticized or slammed you. Yet, you and your sister Rangoli have not let a single opportunity to bash her. Most of the times, it has been without provocation.

After the release of Manikarnika – The Queen Of Jhansi, you told Alia Bhatt to ‘grow a spine’ and alleged that she’s having issues with you due to which she didn’t reply to your invitation to see your film. She apologized humbly to the latter and also said that hurting you was not her intention. Instead of throwing back the mud, she gave a dignified reply. Later in April, when you beat Alia Bhatt’s Gully Boy performance in a poll, you again mocked her and her part in the Zoya Akhtar starrer. Just yesterday, your sister Rangoli remembered Alia Bhatt (not in admiration obviously) while comparing the brouhaha over Sandeep Vanga Reddy’s interview.

In short, you guys have indulged in a MASSIVE ‘smear campaign’ against her. And if Justin Rao is ‘harming your brand’, then you and your sister are doing the same hundred times more to Alia since both of you are extremely popular with a wide reach. So why are you being a hypocrite here? If you really want people to stop trolling and having an agenda against you, why don’t you practice what you preach in the first place?

And can Justin or even someone with lakhs of followers really harm a celebrity with his/her tirade on social media? We don’t have to look far. Just take the instance of Kabir Singh. Social media went berserk over the film’s content and also over the interview of Sandeep Reddy Vanga. Did that affect the collections even by 0.000000000001%? Audiences loved the film and it is all set to become the biggest grosser of 2019, shocking one and all. After all, it’s an adults-only film and such movies rarely do business over Rs. 90 crore. Didn’t viewers ignore this anti-Kabir Singh campaign and instead thronged the cinemas?

Similarly, Alia Bhatt has not got affected by the statements made by you and Rangoli at all. She’s one of the best talents, just like you, and has a considerable fan following. And if you and your sister can’t hurt Alia, how can Justin Rao or any other journalist do so?

Dear Kangana, I have been a huge admirer of yours since your first film and continue to love the way you perform on screen. But your off-screen antics are getting a bit too much and I fear it’ll affect your career. I shudder to think that someone like you who made us root like never before for your character in Queen and who stunned one and all with her double role in Tanu Weds Manu Returns will one day stop getting work because of your motormouth. I am not saying you shouldn’t raise your voice on the wrongdoings. Of course, you should. But merely intimidating a journalist and accusing him of having a ‘gandi soch’ especially when you have hundred times more of such a thinking is just downright unfair. So my humble request to you is that please let your films do the talking. Don’t let audience’s love for you go away just for the sake of some cheers among your blind fans on social media.

I hope this letter is taken in the right spirit, if it ever reaches you. And apologies if any of my words have hurt you.

And all the best for Judgementall Hai Kya!