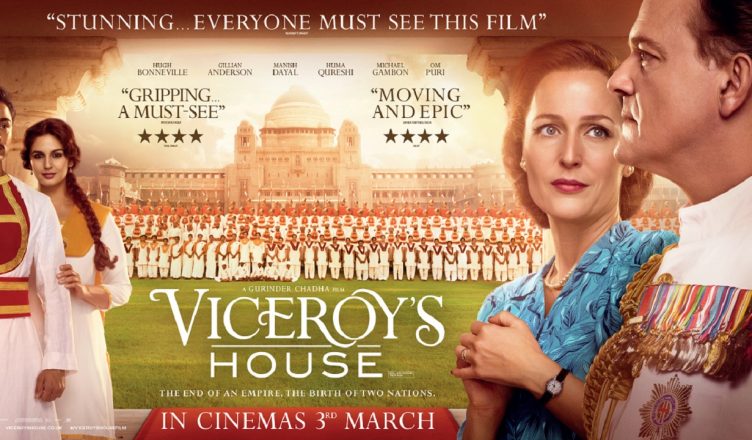 There have been plenty of films made on Partition of India and creation of Pakistan but most of them dealt with those who had to suffer as a result of this episode. Viceroy’s House is a film that tries to tell a story of those who planned the Partition and the process that they went through. Despite being just 106 minutes long, Viceroy’s House packs in a lot and turns out to be an enlightening, informative fare that surely deserves a watch!

The story of the movie: The year is 1947. Great Britain has decided to give India the long-pending Independence. Lord Louis Mountbatten (Hugh Bonneville) is assigned as the last Viceroy of India who is given the task of transfer of power in the most peaceful way possible. He arrives in India the same year with wife Lady Edwina Mountbatten (Gillian Anderson) and daughter Lady Pamela Mountbatten (Lily Travers). He is obviously provided with the Viceroy’s House, Delhi as his residence and office. He quickly starts work as soon as he lands and tries to understand if India needs to be partitioned, as per the demand of Muhammad Ali Jinnah (Denzil Smith) or should it remain united, as per the recommendations of Pandit Jawaharlal Nehru (Tanveer Ghani) and Mahatma Gandhi (Neeraj Kabi). At the same time that Lord Mountbatten joins office, Jeet Kumar (Manish Dayal) joins the Viceroy’s House staff and so does Aalia (Huma Qureshi). Both have a past and seem to be attracted to one another, but their different religions and also that Aalia is scheduled to be married to Asif (Arunoday Singh) make their love story difficult.

The film is not titled Viceroy’s House just for the heck of it. 70-75% of the film is based in the house as that’s where all the independence-related meetings take place. As evident from the aforementioned synopsis, the film is not just about Mountbatten but also about the staffers in the House which again is in sync with the name of the film. The tensions that arise between the staffpersons of various faiths are in a way also seen as a reflection of what was happening in the country at that time. Director Gurinder Chadha uses the documentary-style footages to show visuals of riots, curfews, loss of life and property etc. The director has revealed that this idea was adopted due to budgetary constraints. But it gives a nice touch to the film.

Viceroy’s House starts off very well and very quickly. The characters are quickly introduced and so are the workings of the House. The manner in which the staffers are seen standing in the background, listening to Mountbatten and other leaders as they took some significant decisions that were to go down in history makes for a terrific watch. The Jeet-Aalia love story also has its moments and nowhere has it overshadowed the film’s principle track of the Partition. In fact, nothing goes overboard in the film. However, there are far too many characters in the film. Some characters don’t get chance to be established well. Some of the scenes of revolt and communalism among Viceroy staffers seem a bit unconvincing, especially the spitting scene. The character of Asif don’t get much screen time after a point.

Viceroy’s House is embellished with some brilliant performances. Hugh Bonneville delivers a first-rate performance. He gets totally into the skin of the character and is totally convincing, with his mannerisms, carrying off the uniform, solving the arguments peacefully during the meetings etc. Gillian Anderson is poised and also understands her part very well. It’s interesting to see her giving her suggestions, most of them which always were sensible, to Lord Mountbatten and others. Manish Dayal, best remembered for The Hundred Foot Journey, is as expected quite a scene-stealer. Whether it’s the romantic or breakdown sequences, he does it very well. Huma Qureshi gives a fine performance, and much better than her works in Jolly LLB 2 and Dobaara. She shines in the finale and also the emotional sequences. She proves once again why she’s one of the best talents around! Tanveer Ghani leaves a huge mark, but it’s debatable whether Nehru was really like the way shown in the film – adamant, dominating and not that of a Britain-returned gentleman. Neeraj Kabi steals the show as Gandhi. His entry scene is heroic. A lot of actors have played Bapu but for me at least, Neeraj Kabi’s portrayal will be one of the best and most memorable! Kudos! Late Om Puri (Ali Rahim Noor, Aalia’s father) gives a heartfelt performance. Michael Gambon (General Lionel Hastings Ismay), who played Professor Albus Dumbledore in Harry Potter films, rocks the show, especially in the crucial billiards sequence. Denzil Smith underplays Jinnah nicely. Simon Callow (Cyril Radcliffe) has a late entry but makes an impact. Sarah Jane Dias (Sameera) is wasted and one really wishes to see more of her, not just in this film but also in films in general! Arunoday Singh too deserved more screen time considering the important character that he was playing. Darshan Jariwala (Gupta), Lily Travers, Raj Zutshi (Chandra the head chef), Jaz Deol (Duleep Singh) and others do a good job.

A R Rahman‘s music is subtle but enhances impact. Ben Smithard‘s cinematography is simple and neat. It’s a feat the makers got a chance to shoot the film in the real Viceroy’s House (present-day Rashtrapati Bhavan) and the grand mansion has been wonderfully captured. Keith Madden‘s costumes are authentic. Valerio Bonelli and Victoria Boydell‘s editing is smooth and despite multiple tracks, the film progresses nicely and one doesn’t feel any jerks or that the film is going haywire. Laurence Dorman‘s production design is also quite true to life. It must have been a task to create the wads of currency notes, music instruments, cutlery etc of that era. Viceroy’s House is based on the book Freedom At Midnight by Larry Collins and Dominique Lapierre and also The Shadow Of The Great Game – The Untold Story Of Partition by Narendra Singh Sarila. Paul Mayeda Berges, Moira Buffini and Gurinder Chadha’s screenplay is more or less great as it effectively packs in a lot in less than two hours. The film never gets too heavy until the last 15 minutes and hence despite the theme of Partition, this isn’t a depressing or tragedy movie. Dialogues are simple and sharp. Gurinder Chadha’s direction is great and she is indeed the right person for it for two reasons – one, a film like this needs a mix of Indian and foreign actors and she has worked in such a scenario before with Bend It Like Beckham and Pride & Prejudice. Also, her family had to migrate from Pakistan during the Partition and she has grown hearing stories. Hence, she has a personal connection with the tragedy and the sensitivity shows. There are no major complaints with her execution as she has dealt with some scenes excellently. But one wishes to know what happened to some of the characters introduced in the film, later on. Also, Gurinder just touches upon Nehru-Edwina ‘romance’ but leaves it there without going too much into it.

On the whole, Viceroy’s House turns out to be a huge surprise as it looked not-so-great from the trailers. But it’s a brilliantly-made film and not just another film on Partition. It tries to show how difficult the task of Partition was and it also throws light on the staffers serving in the house of Lord Mountbatten and these things give a unique touch to the film. Performances are outstanding and so is the production design, costumes etc. This is surely one of the must-watch films of 2017 but sadly, due to no buzz and lack of mass appeal, Viceroy’s House is going to suffer at the ticket window. But with the emergence of streaming services like Netflix and Amazon Prime, here’s hoping Viceroy’s House reaches to as many as people as possible!